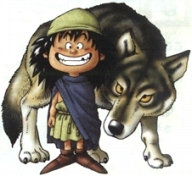 Meet Ruff, the white wolf. No, not the one at the back. The one with a hat, shoes and a wide smile. Ruff used to be a wolf, you see, until the town of L’Arca was victim to a terrible spell from the Hackrobat. After being sealed away many years ago, Hackrobat broke free and was very mad. In his fury he cast a powerful spell on the whole town, one that turned animals into humans and humans into animals. 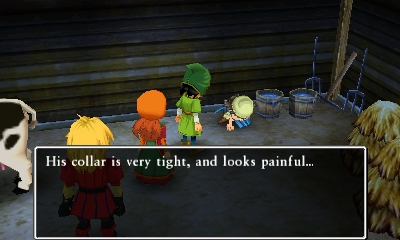 Ruff was unlucky enough to be transformed into a human with a chain around him, which made it extra tight. The chain was wolf-sized, not human-sized. To make this long spoiler-filled story short, the heroes freed Ruff, tracked down the Hackrobat and made him reverse the spell.

Then something unexpected happened. Ruff did not want to be turned back into a wolf. Unable to speak, he shook his head and looked worried. He had gotten used to being a kid and wanted to go on a journey with the other heroes. The Hackrobat obliged and Ruff’s fate was decided. 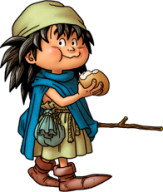 He looks a bit cheeky, but he just wants to have as much fun as possible. As a dog he couldn’t digest things like bread, or grab sticks. Whether it’s playing, eating, or fighting, he always does his best. What more could you ask for in a party member? I’ve given Ruff a boomerang to use as a weapon and it really suits him. It’s useful for regular enemy encounters on the world map, because you can hit all 3 to 5 enemies at once. Very useful to control a crowd, but not the strongest weapon for a single enemy. If a boss fight is coming up however, I’ll equip a strong pair of fangs. Ruff is always happy to wear them and do his best. 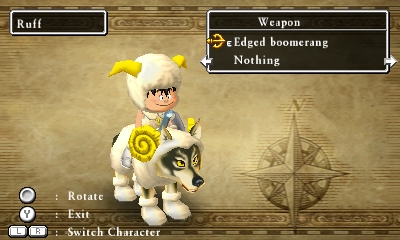 Right now he’s a Shepard with a lot of useful abilities. He can help the party to cross perilous ground like lava and spikes, cure anyone from the effects of poison, and sniff out hidden treasures. If a treasure chest seems suspicious, he can even reveal the contents of them before they are opened. If he’s feeling extra naughty, he can Whistle and summon an enemy encounter on the spot.

What a fun character. It’s so cool to have my little Twilight Prince as an essential part of this journey. There are “monsters” you can recruit in previous Dragon Quests but none with a personality or backstory this unique. I really like Ruff and the whole cast of Dragon Quest VII so far. All the characters have unique mannerisms you wouldn’t be able to guess by looking at their artwork on the front of the box. You’ve got the bossy, yet caring Maribel, and the smug looking Prince Kiefer who just wants to be loved. A great party makes a big difference to my enjoyment of RPGs, especially ones this big.

I still haven’t even met every party member in this game. With Ruff by my side, I’m going to stop the forces of evil, save the world, and make as many friends as possible along the way. The life of a gamer.

I can’t help but wonder how many animals out there would make great party members if given the chance. A snake could be a really good dancer. A kangaroo would easily climb through the ranks as a martial artist. I think with the right attitude and opportunity, anyone can be part of a team that saves the world.

2 thoughts on “Dragon Quest VII – When the Going Gets Ruff…”