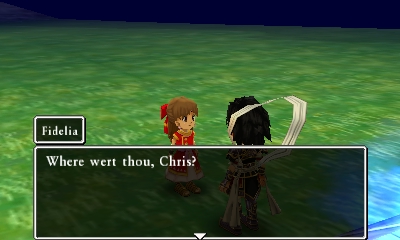 I’m so sorry. Upon returning to the past, I realised I had done a terrible thing. I’d left a little girl on her own in a field full of monsters. She just stood there waiting. It was a miracle she was alive with no battle skills. I expected things to just resume from the moment I left her, but my understanding of time had proved to be naive. Time does not care where you are, and continues to push forward in all places it inhabits. So where wert I? I owed Fidelia an explanation.

On our quest to save Aeolus Vale and the Cirrus people from losing their power of flight, we had hit a brick wall.

Cumulus Vex was the monster controlling the wind, and it was just too strong, wiping out our entire party. Just two hits was all it took for it to KO any member of my team at any given moment, and his enormous Agility allowed him two attacks each turn. We could survive one Thin Air attack, but all 4 members took over 100 damage from it. If the second attack hit any member with less than 200 total HP, they were dead. It was just not a realistic fight with those damage numbers. My only hope was either getting lucky, or building up my resilience.

Like a coward, I retreated to the future to get stronger. This was when I left Fidelia. Why was she with us in the first place? As the only member of the Cirrus race without wings, she was the only one still standing after the winds had ceased. All the other Cirrus could not use their legs, because they had gotten so used to flying everywhere. Fidelia was the only one who could open the door for us in the Sanctum, with her Cirrus blood. Who would have thought being born without wings would be a blessing? Those winged boys who made fun of her, now lay crippled on the floor to reflect on their behavior.

We left all that behind to regroup in the future.

My first stop was the town of Hubble, simply the most recent town on my journey that I could access quickly. Abusing my own power of flight, I zoomed there immediately upon returning to my own time. I went to the shop to see if my gear could be better, and sure enough there were some sets of armour and shields that could improve my Defense by more than 20 stat points. Enchanted Armour, Tempest Shields, they had it all. For some reason, each town I had come across had progressively more powerful equipment, as if they somehow knew where I had been. Or perhaps to counter the tougher enemies in the region. Yes, that’s more likely.

With Cumulus Vex landing almost exactly 100 damage with each hit, this new gear could mean the difference between surviving a double hit or being wiped out. Easy free stat upgrade, sweet! Normally I’d jump on it, but I didn’t have enough money. I ignored the gear before because I didn’t need it, but now was the time to get my funds together.

A trip to the bank in Estard let me retrieve 27,000 Gold I had deposited during the earlier, easy part of the game. Oh excuse me, I mean journey. There was no point buying the best equipment when I was already beating enemies comfortably, but I was still making progress in the bank. However, it still wasn’t enough to get gear for everybody. I just needed a few thousand more gold.

I dug into my bag and found some items I could sell. Some weapons were obsolete by now, with the party eagerly agreeing to sell the Iron Lance and Iron Shields. Sir Mervyn wanted to keep one Silk Robe, however. After a lengthy debate we obliged, but Mervyn kept his reasons to himself. We sold two of Ruff’s Stone Fangs, because he only needed one and nobody else could use them. He had one favourite pair and wasn’t interested in the other two, anyway. That proved to be all the gold we needed, and after selling enough spare items we had everyone now equipped with their best gear. Things were looking up.

While freely roaming the present lands with the Zoom ability, I realised that my hero was close to accessing a new vocation. He had 7 out of 8 stars in his Paladin career, so we grinded a few battles until the Paladin job had maxed out. Now Champion was available, and it offered a noticeable increase in almost every stat.

Now I wasn’t just feeling stronger, but looking stronger with a brand new costume. Cumulus Vex would surely tremble before my awkwardly shaped scarf. Aishe also changed her class to Warrior to increase her HP a bit. She had the lowest HP of all, and this meant she was the most susceptible to Cumulus Vex’s potential double attack. To cover this weakness, I gave her several Seeds of Life I had found on my journey, giving her another 30 HP in total. Suddenly HP had become a strength of hers.

After his early adventures as a Shepard, Ruff had maxed out two more major classes. He excelled as both a Monster Masher and Pirate. Life as a Pirate was going well for Ruff, so I kept him there. Any other job changes would lower his crucial stats at this point. He had learned some amazing abilities like Thin Air and Maelstrom, and gave the monsters a lot of Coral Grief. With his high agility, he was hitting hard and fast and having a great time. 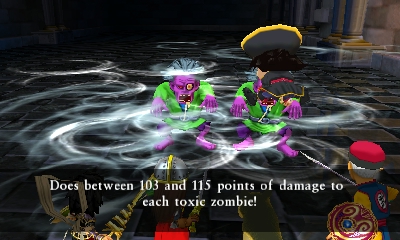 We grinded a few battles to get used to our new vocations, equipment, and stats, and headed right for Cumulex Vex again.

Now that my hero was a Champion, it meant some of the high-level Paladin skills were gone, and I did not have multi-heal anymore. This made healing my party from Thin Air very difficult and slow. The party could tank Vex’s massive hits once or twice, but without healing they were inevitably still doomed to an awkward mess of healing and reviving from all 4 party members. Thin Air hits all 4 of my party members at once, and that means everyone would have to use Midheal. It was impossible to do damage while managing this, so I needed a new strategy. 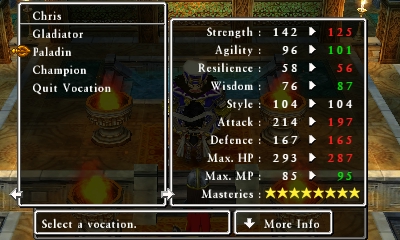 To get my Spells back I had to downgrade my stats again. The hero was the only one of the 4 who could multi-heal, so this had to be done. I decided to pump Seeds of Magic into the hero to increase his MP, solely to use more multi-heals in the battle and go all out. I also had Oomph! which doubled someone’s attack, and this allowed Aishe and Ruff to hit very hard and make up for Chris’s lack of attacking while he healed every turn. I was now able to survive every turn while doing solid damage, and it was only a matter of time before we took down the beast. After all that, it actually felt easy because I had full control of the battle. What a turnaround.

So there you have it, Fidelia. I retreated to my own world to get some important things done, unaware that time was still passing hundreds of years in the past. That’s a very unique aspect of this situation and I’m sorry. It might have felt scary to wait there on your own, but that’s when we find our true inner strength and you did us all proud by hanging in there. Thank you for waiting.

Conditioning my party for battle is some of the most fun I’ve had in RPGs lately. Every game has its own flavour of challenge, from taking down the huge beasts in Xenoblade Chronicles X with specific setups, to balancing a team to handle different types of Pokemon. I’m grateful for the difficulty spikes in Dragon Quest VII, because it has allowed me to get more out of the game. I feel like these moments are when the game goes from fun to obsessive, and it can help you see gameplay depth you had no reason to look at before. I didn’t get any screenshots of the Cumulus Vex fight because I honestly didn’t expect to beat it yet. I was ready to dig into the next part of the grind and figure out more potential setups. At the very least, I’ve sharpened my senses and feel ready for any upcoming challenges. Onwards now, to the next town. Past, future, present, it doesn’t matter. As long as we are having as much fun as possible, we’ll be at our best.

One thought on “Dragon Quest VII – For Glory, Fidelia”