Too dangerous, they said. That’s why we’re locked in here. Horrific beasts have taken over Earth, beasts known as Aragami who only live to consume and destroy. Yet we’re the ones treated like evil, the only people who can fight them. The uncreative God Eaters just call us “Adaptive” God Eaters or AGE for short, simply because we can breathe the air outside. It’s a long story but Earth is screwed. The air is full of corrosive ash that humans can’t handle, except us of course. This “ability” has led us to being locked up and treated like test subjects. We only get let out to do missions for them.  Is that our fault, did we ask for this? We must be bad, just like the monsters right? Then why are we having so much fun slaying them?

Oh well, it’s time for a mission. This is the only time we get to do anything, so it’s basically what we live for. After a while you just accept it and have as much fun as possible breathing the toxic air. In this kind of oppressive environment, staring death in the face is enticing. The views outside aren’t bad, either. A decaying building is still less depressing than one full of workers. 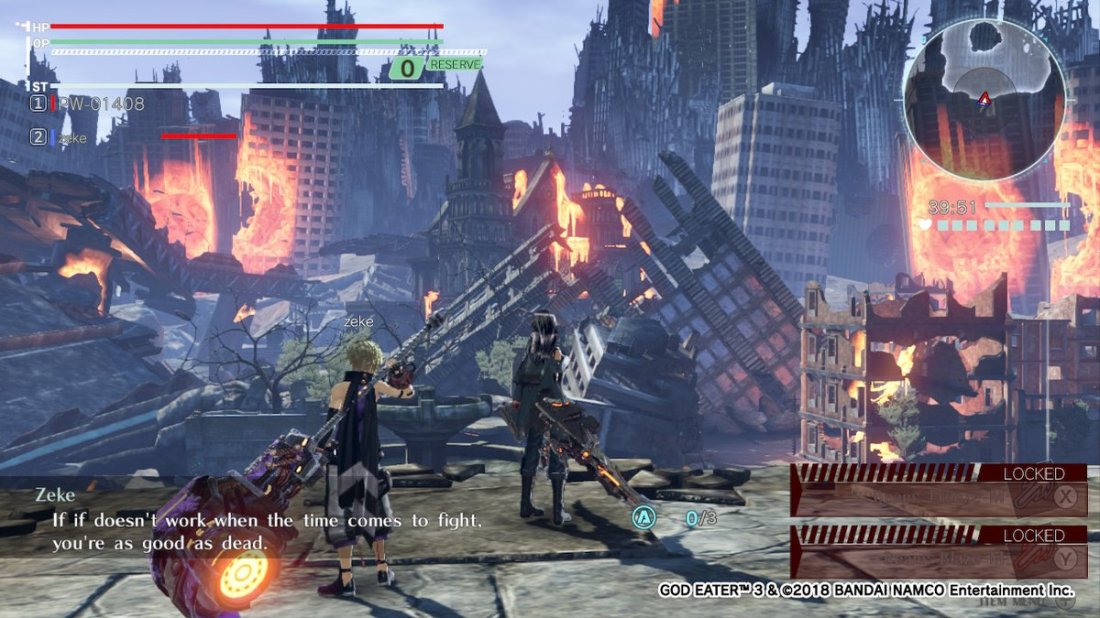 There’s nothing special about the way we fight. We swing our weapons about, mash buttons, watch our stamina, evade and heal, and back each other up. It’s low-budget no-nonsense action. We are fast to react. When we fight side-by-side our engage meter builds and gives us more strength. We can also do math and know exactly how much damage we’re doing, with floating numbers in our head.

The regular God Eaters, let’s call them “Monster Hunters” since we feel like we are still God Eaters… they are a bit slow in comparison. Nothing wrong with that, but they couldn’t hack it out here. Their moves are stiff, committed and strategic while we can evade and slash in a split second. We can even switch between two weapon types with a button press while they disappear back to base and take hours. The new Aragami beasts are not going to wait for you to be ready. That’s why we’ve been chosen, and why they hate us. The real winners here are the monsters who aren’t fighting themselves.

While we’re being “evaluated” by the rest of the God Eaters we only have limited resources and access, I heard one of the guards mumble something about a “demo” on some kind of eShop. We don’t have any context or story so we just have to speculate why we’re here and what’s going to happen. I think it’s time to break out of these shackles, wouldn’t you say?