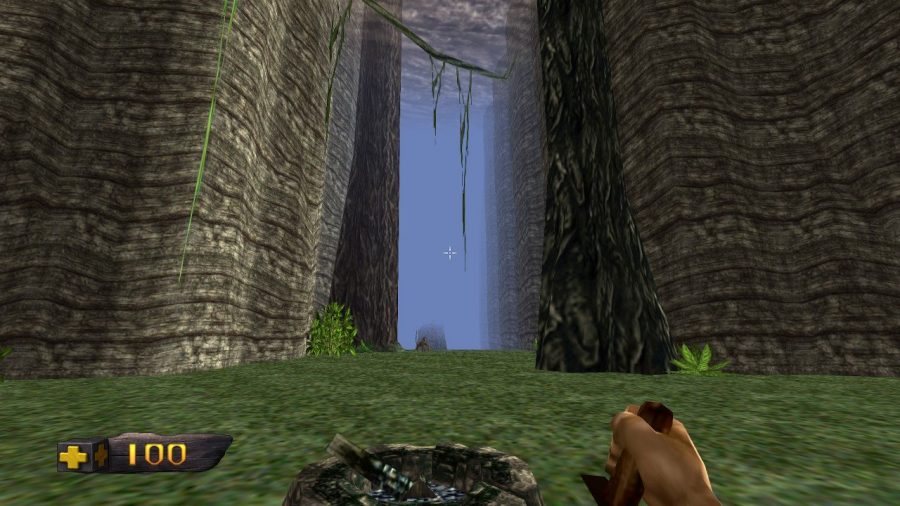 I am Turok! This burnt campfire is my last memory of comfort. My next meal will be the taste of success. I’m not sleeping again until I save the universe.

I launched away with a sprint. I don’t know any other speeds, only maximum thrust. My entire body tilted left as I changed direction using all my body weight and tilted my head to keep my speed around the next corner. I’m going to find all the parts of the Chronoscepter, before it gets into the wrong hands. I will slay anything in my way. I am Turok! I will record my adventures on stone tablets and send them to Pietriots, a trusted publication in the future!

Thanks Turok. I just played through Turok for the first time on Switch and had a blast discovering this game. Turok is far more interesting than it looks, with awesome movement, top tier level design and a consistent atmosphere. There aren’t many FPS games like this anymore that let you explore to such a wild degree. Turok is a time-traveling warrior who doesn’t care if it’s 1997 or 2019. Just up that resolution and framerate and you’re good to go. When I first started playing this game it was a bit overwhelming seeing these old textures spin around at the speed of light with a perfect framerate and fast camera. You can see every ugly detail with utmost clarity, like chunks of different food in vomit.

The gameplay offers a nice mix of shooting, platforming and exploring. Platforming is quite funny because you jump further when you jump sideways. Even more amusingly, this is intentional design. You just thrust your body sideways for extra distance. That’s how badass Turok is, he doesn’t think regular jumping is enough. This jungle happens to be arranged in just a way to allow secret health upgrades, keys and weapons to be accessed by doing badass diagonal jumps. You’re encouraged to embrace your inner warrior, as you climb vines to the sound of compressed grunts. Swimming is also accompanied by a rhythmic thrusting of extremely powerful breast strokes. You are just constantly doing awesome stuff with appropriate feedback. 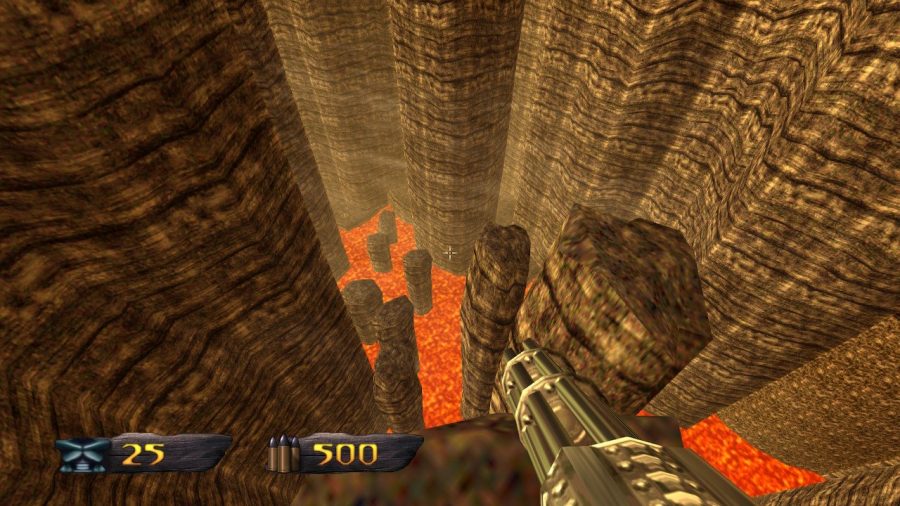 This is the kind of platforming Turok might throw at you at a random point in any level. These pillars move up and down and you have to time it right, while making sure you land on the tiny surface without thrusting too far. The controls are quite good but almost too good sometimes, if you tap a direction and “over-adjust” even slightly you can fly too far off the platform. The game has quite a few platforming challenges that take place over death planes, which makes it feel like every jump is important. Especially when the last checkpoint is far away.

The game is structured with 8 huge levels with keys inside each level that you have to find to unlock the next. The levels themselves often have big rooms with multiple paths, which makes exploration a very key element here. I went through Level 2 without finding a key and had to go back to grab it, luckily it was near the start. This is the game’s biggest strength but also comes with flaws. The save stations are pretty far apart, sometimes you can go an entire level without finding one. Luckily there’s one in the hub world, but even that’s hard to see at first. Just look on the furthest wall to the North if you are wondering. 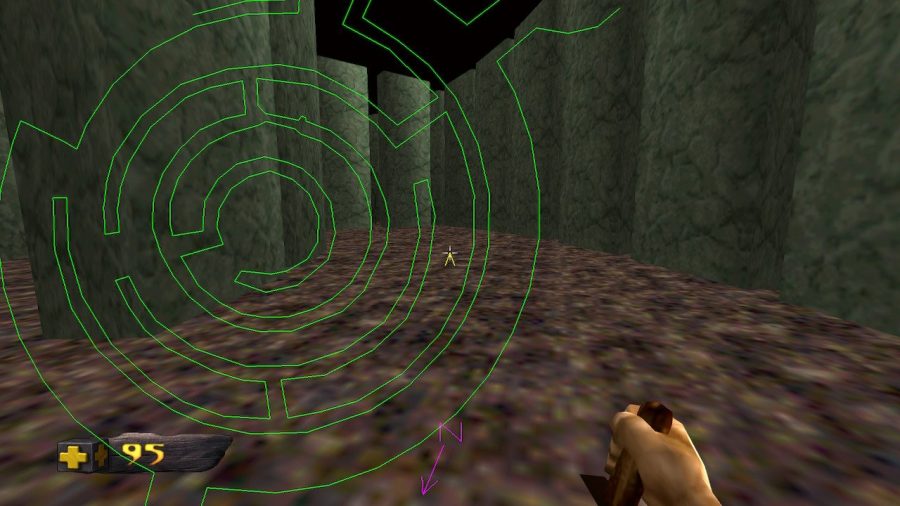 With a tap of the Y button you can bring up a map during gameplay to help you through this brown and grey hell where everything looks the same. It can get a bit overwhelming at times. Each level has a slightly different theme whether it’s catacombs, open jungle, or a treetop village. The levels are absolutely gigantic as well with walls that can stretch on forever and a very large sense of depth. In the treetop level it feels like you are dropping for an eternity and I can’t believe such a big environment could exist on the N64. It never really drags though, as the game constantly mixes things up with switches, traps, puzzles, warps in weird places and unconventional platforming. I liked the flow, it kept me engaged just because I was excited to see what weird thing was next.

Music is a big part of Turok’s atmosphere, it’s a bizarre mix of horror and tribal rhythmic beats and sound effects. The dripping of water in a cave, the bustle of monkeys and birds, all combine with an expressive drum beat to become part of the music itself. It gives the game quite a unique atmosphere and makes you feel like you’re exploring in a place you shouldn’t be. The melodies are very simple but effective, I’ve got a lot of weird sounds stuck in my head after a play session of this game.

The shooting is extremely basic and fun, with generous hit boxes. You can just aim in a general direction and the bullet will hit something. The skill of the game is more about surviving than skilled gunplay. You want to position yourself well, and be careful not to take too much damage since your health doesn’t regenerate. This game has a ton of cheats you can input, including god mode but that also trivialises the design so be careful. There’s a lot of secrets in this game that simply offer more health, and it’s a really nice feeling of relief when you get a big health drop. Health is important when it doesn’t regenerate, and makes exploring the level extra engaging and dangerous. Just…. a little bit…. further. 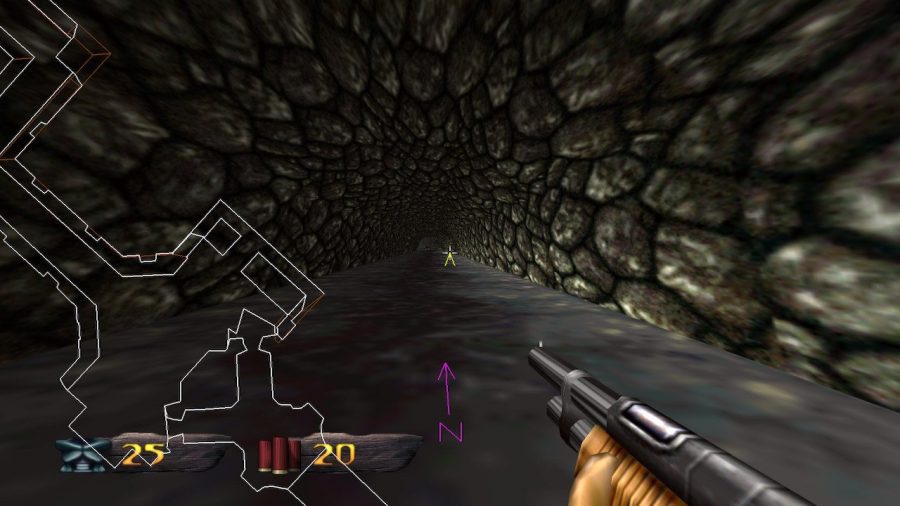 The visuals are obviously very simple and ugly but the scope is worth appreciating. This tunnel above is a secret area not on the map, and it takes minutes to walk through with multiple crossroads. Your entire sense of orientation disappears as you get deeper, and you start to wonder if you’ll be able to make it back. It’s extremely rewarding just to explore places like this and impressive how long you can go without a load screen. Actually come to think of it, the game has no loading whatsoever. I’m not sure if this is how the N64 game was, or unique to the remaster.

This game also has some destructible trees which I find impressive for an N64 game, it’s a small thing but not too common from this era, and even today we don’t see it too often. There’s also some crazy boss fights with wild movement patterns where they manipulate the environment and break walls. Even though we’ve moved past N64 limitations now, I still find this cool and I love ambitious design that pushes the limits. An impressive piece of work will always be relevant.

The Switch version also has gyro controls which I could not get used to, quite honestly. They don’t feel right to me. I’ve heard some people praise it but as someone very used to Splatoon, this is hard to get used to. It feels too slow and locks in place a lot, without a way to center the cursor. It’s just not faster than the sticks. It’s a bit ironic because gyro controls were what sold me on this game in the first place, since I usually enjoy them. Luckily, it feels absolutely fine with stick controls since enemies are so easy to hit and the movement is so fast. Turok has very solid core controls and there’s a lot of options to tweak. 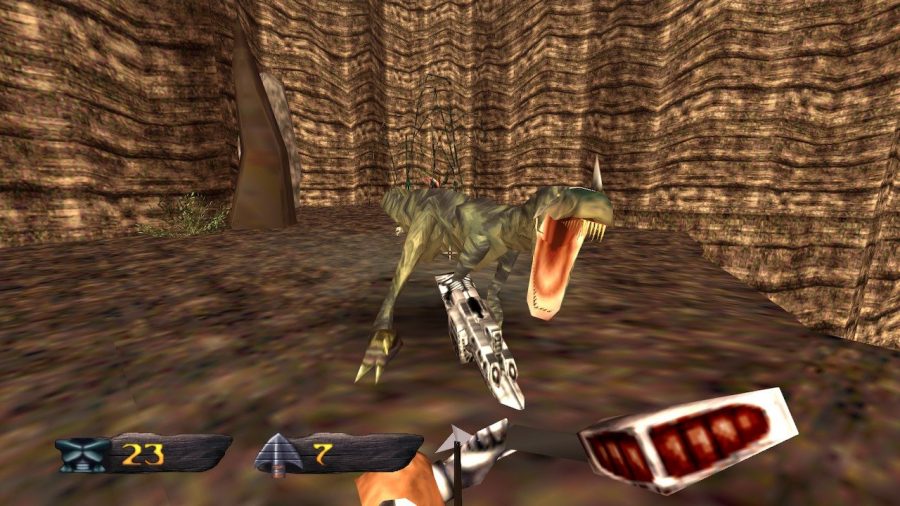 Do you have a license for that gun, mate? The enemies start off kinda normal with angry velociraptors and derpy hunters roaming about, then suddenly the dinosaurs have guns. Then there’s a jeep. Then there are humans riding armoured dinosaurs with guns. Then robots, because time travel has no limits. Literally anything could exist in this game with no explanation required. To help you understand who’s who, the dinosaurs have green blood, humans red, and robots have blue blood.

I felt such a warm feeling of nostalgia while playing Turok even though I was playing it for the first time. It just captures a lot of things that made games from the 90s great, with wholesome level design, cheesy sound effects and good action-focused controls. The exploration was my favourite thing about it. Unlike modern FPS, this game doesn’t throw waves of enemies at you and avoids feeling repetitive because the focus is on the environment. That feeling when you have only one key left to find in a level and a few unexplored paths to check out is super exciting.

If the game is missing anything I’d say it’s any kind of story or lore. The only line of dialogue I recall is “I AM TUROK!” when you get an extra life. Every single unlockable, secret or item is all just ammo and gameplay related. That’s cool, but it would maybe be nice to find some info about what the heck’s going on. Maybe in Turok 2 which I am yet to play. 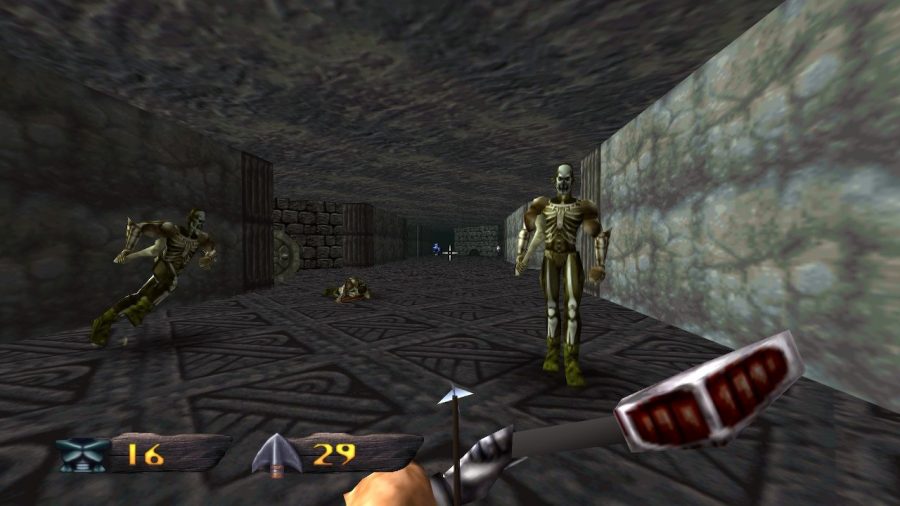 G’day mate, any idea what’s going on? Oh you just want to assemble the Chronoscepter to break down the barriers connecting time and space and destroy the universe? Okay sorry but I AM TUROK and I can not allow that!

Turok is quite simply an awesome game and the port to Switch is very well done. I will still concede that it’s not for everyone. If you’re too used to modern design with waypoints and detailed maps, you might get quite lost in this game. It takes a bit of patience and a lot of curiosity, but that’s also what made it feel amazing to complete. The graphics might take some getting used to, but once you’re in the mindset of finding keys and progressing through levels the bad textures just fade away. If the game ran poorly I’d be a bit more critical, but the gameplay is very smooth and there’s really no flaws besides the dated polygon count and textures. The game just feels wholesome to me. There’s nothing here a time-traveling warrior can’t handle.

One thought on “Turok – What A Time To Be Alive”