Surprise! A meaty demo for a hotly anticipated JRPG just stealth-dropped during the mini Nintendo Direct while you were playing Animal Crossing. The Bravely Default 2 demo is free, and appears in the New Release section of the eShop as its own thing, since there’s no page for the main game yet. The demo is a 2.3GB download, and claims to have a different story to the main game with harder battles, in order to encourage everyone to experiment with the job system and get used to being Brave and Default.

You start off in the beautiful town of Savalon. They were once desperate for water, but now the town is drowning in it. That’s not so bad, right? I’m okay with global warming if every town looks this cool when it goes underwater. Some kind of water crystal is causing this though, so we’re off to go and investigate. After talking to everyone in town you can get a couple of sidequests as well, just basic gathering quests. There’s a lot of stuff to do when you first get out into the open, and a few changes to the series become apparent.

Enemies are super aggressive and will charge at you. That’s right, no more random battles. Although some of the enemies run faster than you, so you still can’t avoid them. You can swing your sword or sneak up on them from behind to get an opening advantage of 1 extra BP, or feel the wrath of an enemy advantage if they charge at you. That happened to me a lot because the faster enemies can spear at you from off-screen in a second if you aren’t ready. More importantly, you can now cut grass with this basic overworld attack. It’s good stress relief, and you’ll find the occasional item.

The brave and default system is back, one of the things that makes Bravely Default unique. Check out my earlier review of Bravely Default on 3DS for more info on the core mechanics. As far as I can tell they are the same here, with different attacks and character attributes. There’s now a weight stat, which also acts to draw aggro and makes the enemies more likely to target someone who has heavier equipment. There’s also an “Aim” stat which could just be a Luck stat with a more accurate name. The biggest difference is the turn order, instead of stacking the whole party’s moves at once, you go one at a time. I’m not really sure if this is better or worse, I suppose it allows you to react a bit more. Still, there’s no indicator when the enemies turns will be, or who is going next in your party.

The difficulty hit me pretty quickly, even after a single overworld battle I was running back to town to heal. It throws you right in the deep end with enemies that hit hard, and a ton of different job class options, equipment and setups to use. You need someone to deal big damage because most of the regular attacks in ordinary classes are weak. It’s a bit overwhelming but I was getting to grips with it after a few battles. There’s no reason to rush because you’re going to need to level up regardless.

I found the dialogue to be wholesome and enjoyable, it’s quality banter between people who seem like they’ve been traveling for a while. It’s the same high quality writing we’ve come to expect from the developers of Bravely Default and Octopath Traveler, both games that I loved. The story dialogue is voice acted in English and Scottish accents, I think they are quite good but my friends tell me I have terrible standards for voice acting. There is also a JP voice option if you prefer that. The music is great too and I found the overworld music catchy and pleasant, a good combination.

If you look up to the horizon you might see your Animal Crossing island in the distance here. The overworld isn’t too massive, but it’s big enough where it “feels” big since there’s no map besides the minimap, and enemies can aggro you everywhere. When you get strong enough though, the enemies start to run away from you instead. Not so tough now, are ya? Bullies.

There’s a good few hours of gameplay in this demo, with a very challenging boss at the end. It took me about 5 hours to do all of that, and I did it all today. That should say a lot about how enjoyable this game is. My biggest overall reflection is that the game’s graphics and presentation are way better than they looked in the trailers, and it’s also nice to be reminded how much fun the battle system in Bravely Default is. Hmmm, I wonder if there’s anything after the boss? 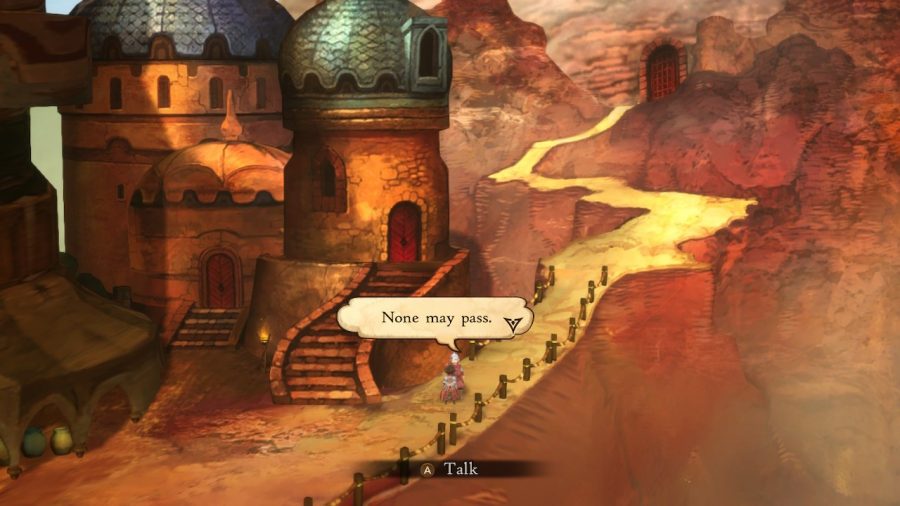 Oops, that’s all for now. You can still wonder around previous areas though, and rumour has it there’s an optional boss looking for a fight. Or maybe it just wants a nice chat? I recommend Bravely Downloading this demo and finding out.