ATTACK! ATTACK! ATTACK! … Review?! That’s right baddies, we’re gonna sit down and talk about this game. My job class as a Freelancer has granted me the ability to have a chat about the merits and worth of videogames. It has only got me killed a couple of times, so I’m doing well. 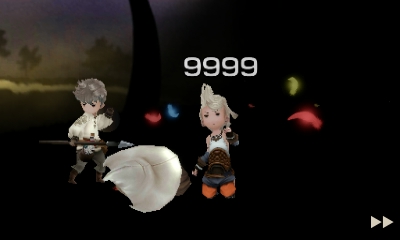 Bravely Default is a traditionally-styled RPG with a non-traditional structure and interface. It has a brand new battle system, dozens of job classes and a lot of customisation. It takes old school combat and guts it, giving you control over the turn order with the Brave and Default system. It also manages to tell a story in a brand new way by breaking the conventional structure of filling in the map. It truly encapsulates what a modern RPG should be, by providing a brand new experience. For this review I will try to avoid story spoilers and just comment on the gameplay and presentation. 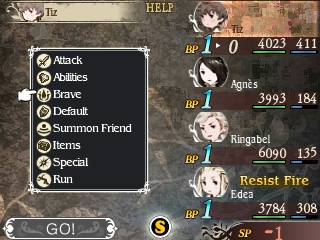 The biggest thing you should know about Bravely Default is that it requires a different approach to many traditional JRPGs. The difference between this and Dragon Quest is that you absolutely can NOT get through this game by mashing and grinding, it is impossible. You’ll get walled and destroyed by a boss (or even standard enemy, sometimes) who has figured you out. This is a great thing though because you have control over your fate.

The most important and consistent way to win a battle is timing, knowing when to unleash your strong attacks, and when to store them. I believe it’s an accessible and potential comfy game if you are aware of this, and a very difficult game if you don’t look at the big picture. It’s definitely worth it because I feel like this is a proper evolution of turn-based RPGs. Without turning it into a real-time battle, it simply allows you to find your place in the turn order with strategy. The same battle can go horribly wrong, or be easy, depending on your position in the turn order. This speaks volumes for how effective it is and how different it feels to other RPGs.

The enemies are crafty. If you try to steamroll on auto-pilot you will just get completely wiped out. Certain strategies you might be accustomed to using the entire game, will just suddenly not work against a certain boss who activates a shield, flies up high, or counters. It’s always challenging your lineup and your way of thinking. I found this refreshing and loved tinkering with my team to the smallest detail. The rich amount of customisation compliments the abnormal strategy to some boss fights and makes you see the game as a puzzle to solve sometimes. There is usually more than one effective strategy too. It’s a lot of fun when you find something in your party’s unique toolkit that is effective. Say you had someone who has been jumping between the Spell Fencer and Ranger classes, and combined some of their abilities to get certain elementally charged damage on a boss to knock it out. It’s immensely satisfying to take down a smug fucker like this in a few rounds. 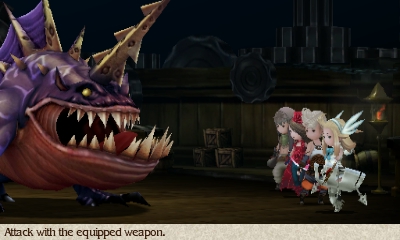 There are some setbacks to the very specific nature of the difficulty. It can get monotonous grinding up new job levels and getting something maxed out. The bane of having SO MANY options is that it’s easy to become jack of all trades, master of none. At a certain point I had to grind because my overall strength wasn’t good enough. I was stuck in a town and could not survive the standard enemy battles on the outskirts without dying. It was a very unique position and I enjoyed overcoming it because this game has so many tools. You can adjust the encounter rate, difficulty, and completely customise your grinding session by equipping the right stuff for each area. I got annoyed with having to remove poison during every battle, so I just equipped three of my party members with anti-poison bracelets, and one with the anti-poison job support ability.

The way you unlock jobs is quite amusing. You have to get a job asterisk, usually claimed by beating a boss. I just love the idea of beating someone up to take their job. The jobs have uses outside of pure battle tactics too, for example when I wanted more money to buy equipment I would make everybody a Merchant for a brief journey so I could arrive back in town and buy all the spells and amiibo. 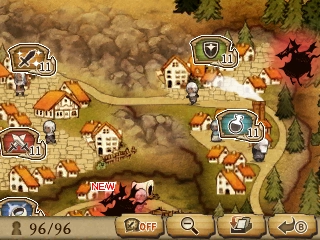 Norende is a town that exists in sleep mode, a game within the game. You slowly populate it with villagers who are assigned to construct shops and nail down paths. The more villagers you have the quicker something will be built. I had my 3DS switched on for almost a week straight because of this, it was so addictive. Even while playing the game I would check on it, to re-assign villagers to a new construction after they had finished. It’s impressive to see this game take advantage of every aspect of the 3DS hardware, from StreetPass, to sleep mode, hell it even uses AR cards. I’ve uploaded a 9999 damage attack to my profile which should be available to all my 3DS online friends and anyone who StreetPasses me. It feels pretty good having that in my pocket. I know it can go higher, but I won’t delve into that until my level is completely maxed.

The music in this game is bold and complex yet immensely catchy, a very rare balance. It has been aggressively stuck in my head since the moment I started the game. From the high-energy battle themes, to the comfy town of Caldisla, there’s a very consistent personality to it. You have sprinkles of generic JRPG comfort melodies that get completely demolished and repurposed by this new offbeat energy. It’s a mix of bluesy, twangy, jazzy hard-rock that coats melodies from a fairy tale. The best word to describe it would also serve to sum up the entire game, modern. Very fresh and fun to listen to. 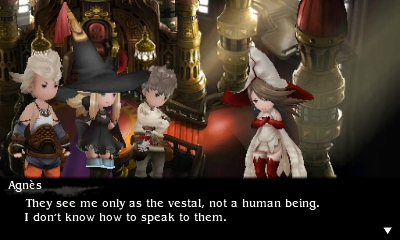 The voice acting struck a chord with me. I was prepared to turn it off, or on to Japanese voices if it was bad, but they did an AMAZING job. Agnes is full of heart and I love the proper way she talks, never breaking that even when emotions are high. She is expressive but precious. I finally know how to pronounce her name too. Tiz is full of purpose but probably the most generic of the bunch, he just sounds like your average Tales hero to me. Edea is very bratty and her tone is strong, everything comes out really clear and sassy. Ringabel is my favourite of the bunch with such a great accent, and true conviction in even the silliest of words. I would love to sit with Ringabel and have a beer. The characters all have their own flaws but they are smart. It’s rare to see this in a JRPG where people are usually fumbling around. Your party in this game has in-depth discussions about which approaches will and won’t work, and what they should do. It’s a real team I would love to be part of in the real world that is almost too interesting to exist. There are some small things that bugged me with Bravely Default’s overall story coherency (trying not to spoil anything), but none of it took away from the characters. I loved them.

I liked the graphics overall but found some inconsistency with the 3D effect. It just seems to have more light bleeding than most games, maybe due to the way they present the environments. Certain towns and backgrounds have a stunning, almost perfect pre-rendered feel to them. This allows stunning lighting, highly-crafted detail, and throbbing realistic animations. The downside is you can’t move the camera, 3D objects don’t have a big presence and the movement is very simple. The incredibly art style makes up for it though, and it all combines to maintain this game’s unique feeling. 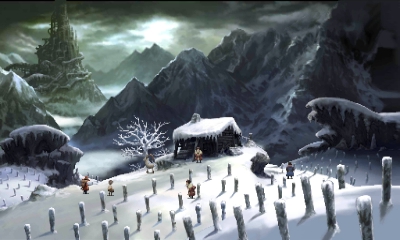 This is an example of a scene with a fixed camera that just zooms in and out when you walk up the hill, but it still looks amazing. Everything is animated and the clouds are sweeping from left to right. There are inspiring sights everywhere in this game, from the giant scary gears turning in Ancheim to the colourful decor of Florem. The overworld and dungeons are in 3D, but very basic and the camera just follows the player. From a technical perspective it’s not as good as Dragon Quest VII or Shin Megami Tensei IV, but it certainly holds its own and turns the artistic focus into a strength of the game.

The second half of the game is something I’ve heard some controversy about coming in, but I never read up on it due to spoilers (still trying not to say too much here). After playing it I’m pleased to confirm that the internet was full of shit once again. I had a lot of fun in this part of the game. It was an absolutely brilliant way to tell a story, and that made it a completely new experience for me. You have the best gameplay in the game and the best story bits to compliment it, all mushed together in a free-for-all, go where you want extravaganza. It’s what I always crave in an RPG. I did not see anything negative about this part, but I wasn’t rushing it either. I was lapping up every bit of EXP and Job Point. It didn’t even take that long, maybe 10 hours of my 50. Battles in this game can be SO FAST if you want them to be. Once you have a strategy you just commit to it and watch the carnage. There’s still some grinding and optional side quests I have yet to do, however. Just like every other aspect, the depth is something that is entirely up to the player. 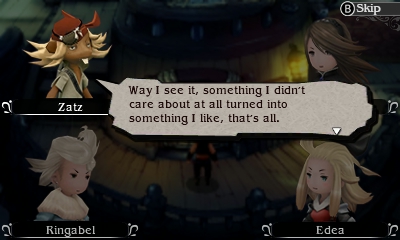 I fell in love with Bravely Default and consider it a masterpiece. I love the characters, music, gameplay, and marvel at the fact that it maintains a coherent style in all areas while telling such an ambitious story. It truly is an outstanding game with so much design I could not comprehend before playing it. This booming world full of creativity and challenge is waiting for anyone who puts this little cartridge in their 3DS.