Once upon a time, a group of Nintendo developers were working in an office. Suddenly, a global event happened that forced them to work from home. At first they enjoyed the comfort, but soon began to miss going outside. They just weren’t getting the exercise and body stimulation they needed. To solve this problem, the developers ordered some copies of Ring Fit Adventure. Gaming and fitness at the same time? Now you can work out while you work! Unfortunately, the game is so sold out that Nintendo’s own staff can’t even get a copy. Gotta fill those pre-orders first. Not content with waiting until their bodies turned to dust, these brave Nintendo developers decided to take the challenge into their own hands and design a piece of software themselves. Jump Rope Challenge uses the Joy-Cons to simulate a jump rope, with a counter on the screen and cute art style for motivation.

This game is a free download, and was announced and released on the same day in this tweet. If you want to give it a try, all you need is around 70mb of free space and two Joy-Cons that come with the regular Switch. If you’re too lazy, just follow my journey instead.

I held the Joy-Cons in my hands and stood up. After a single button press I was thrust into the gameplay. I started jumping and pretending to jump rope. The counter was going up! It’s working! 1, 2, 3, 50… how many should I do? This was extremely responsive and any type of jump I did registered instantly. 100 was the default goal, but the counter kept going higher and higher. 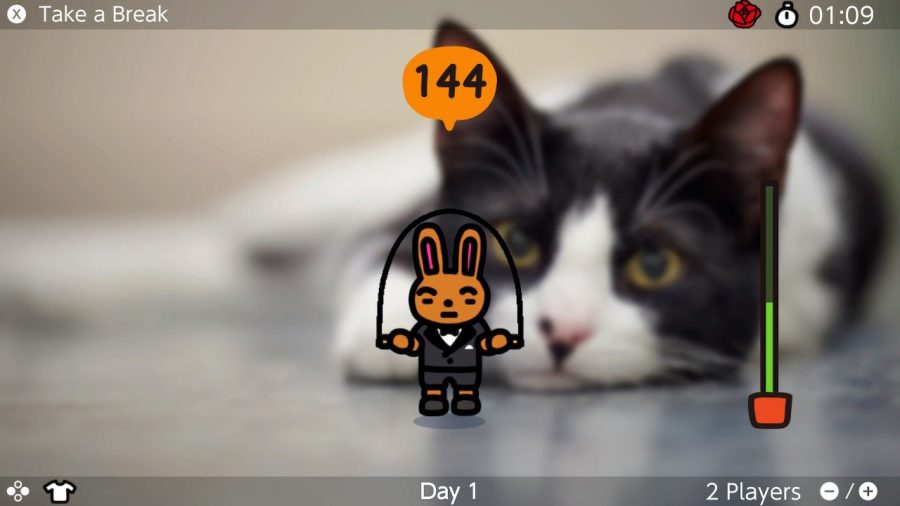 This giant cat was keeping me motivated. What would happen if I stopped, will it eat me? Will it just play with me for eternity and force me to jump forever? I don’t know but the cat knows… it knows everything. I stopped after 200 and promptly exited to the main menu before the cat could eat me. Phew, good workout.

After the first day I felt in tune with this software. It was simple, fast and only took up a few minutes. There’s no intro movie, story or tutorial. As soon as you boot it up from the menu, you just grab the Joy-Cons and go. This was exactly the same as Day 1, except with a new picture in the backdrop. I was at the beach and free from the judgement of the cat. I felt liberated, this could be the start of something great. The fresh air felt so good I forgot to take a screenshot on this day. Just imagine you are a sporty rabbit on the beach of your dreams. 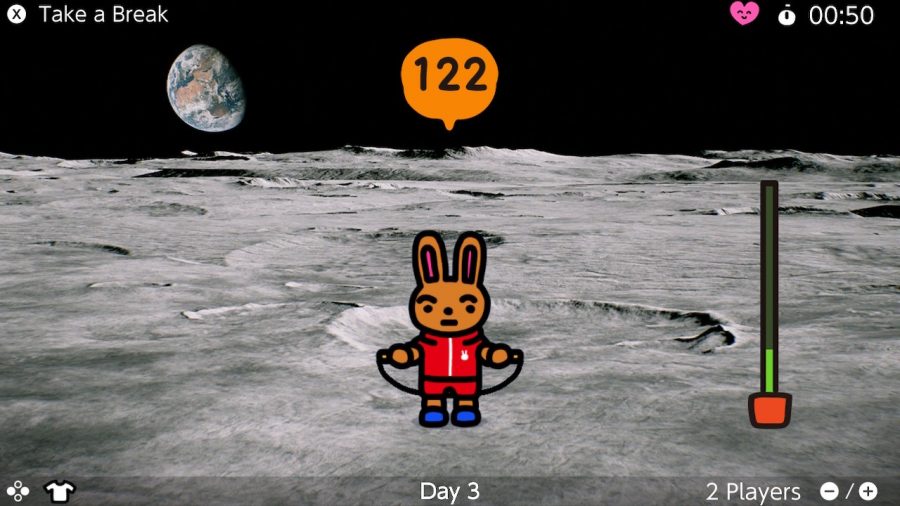 So long Earth! I’ve transcended the normal bounds of exercise and society. There was nowhere better than the Moon to social distance and get some quality jump rope in. Each jump took a bit longer because of gravity, but it was more fun this way. I also noticed for the first time that the sound effects were different depending on the background. My jumps were accompanied by bleeps and bloops from a retro sounding space game. Wheeee! 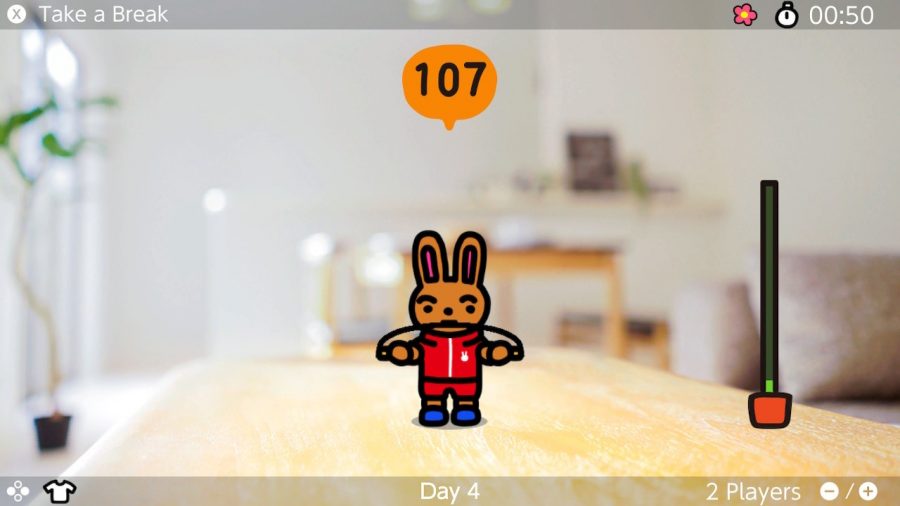 This was a bit of a downgrade from the Moon but part of the journey nonetheless. Variety is keeping this interesting. The table was extremely polished and allowed me to see my reflection while I self-reflected. Thud, thud, thud. This was quite a noisy workout session so I kept it short and stopped soon after the 100 goal. 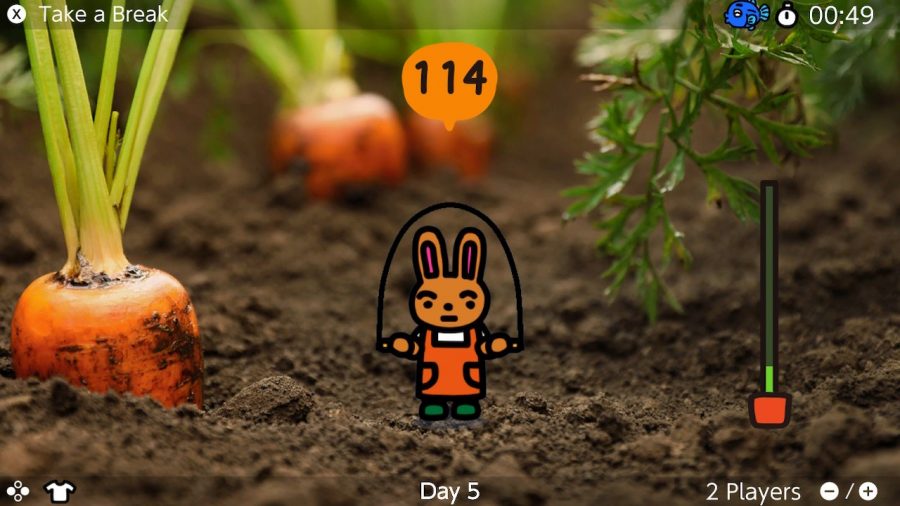 This is more like it, these giant carrots made my mouth water. It was hard to jump in the dirt but I was determined to work up an appetite to enjoy the carrots shortly after. The smell of rich dirt and poo made for a slight distraction, but helped me focus away from the delicious Vitamin A temptation. I made sure to jump with my apron on to avoid getting too dirty, it’s as easy as pressing left and right. Hop… hop… hop… the more I hopped, the better this carrot would taste. 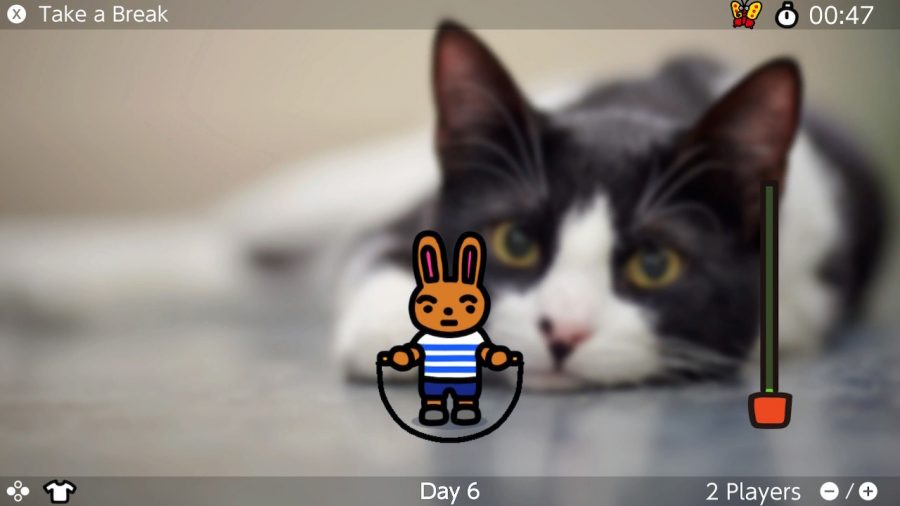 IT’S BACK!! NOOOO!! Day 1 wasn’t enough amusement for the cat it seems, it tracked me down for more fun. Has it eaten since then? I sure hope so. Now I’m wondering if the background images repeat, or are they random? Am I stuck in a perpetual loop of self-improvement just to get to the same place? Is this the essence of life, always moving to avoid falling behind? If that is the case, then how do you get ahead? What is the cat not telling me? 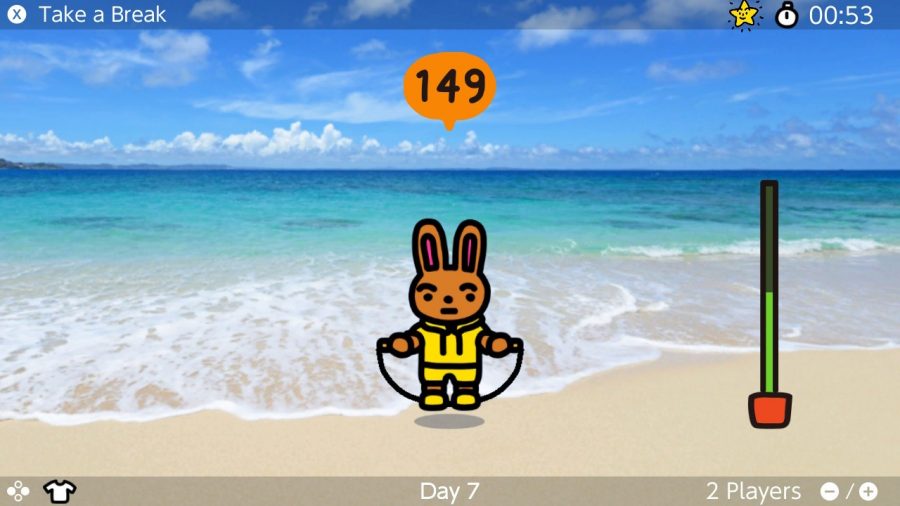 I was back at the beach and I had another chance for a good photo, feels good. However, it seems now that I have exhausted all the content for this game. Seeing the same images over and over is going to bring some tedium now. Wouldn’t it be great if we could put our own pictures in the background from the Switch SD Card? That’s probably what the Nintendo developers are doing. I bet they have top secret Pikmin 4 pictures to jump around the room to. I know that’s what I would do. 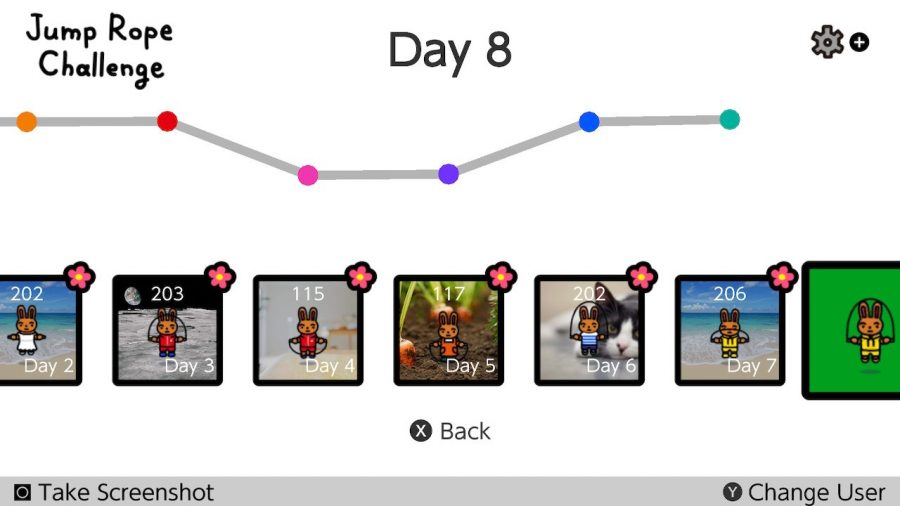 This is the main menu, and it ties everything together nicely with data points. My jumps were a bit lower while jumping on the table and in the heavy dirt, but I still met my goal. The line even looks like a jump rope. Jumping 100 times was not hard as long as my legs were functioning. It was important to play even if I didn’t feel like it, because after this I realised I can do good things even at my weakest. Being alive in a capable body is truly a blessing. Having easy goals you can stick to can inspire a bit of confidence for the rest of your day too.

Jump Rope Challenge is not going to change your life but it’s nice to see this free piece of software take a positive approach to gamer’s well-being. My body now feels loosened up, fresh and healthy. I am one fit rabbit. Now, it’s time to look for an island to settle on so I can exercise with others in a town square when this is over. I’ll just set up a campfire on a random island and see what happens.