I’m here to review games and chew bubblegum, and I’m all out of gum. Let me see if I can find some more on this security camera…

Before going into depth about what this game is, I need to start with my first impressions. HOLY HELL this game has excellent motion controls! Even on the game’s default sensitivity the cursor majestically darts around the screen. I’ve recently been playing Borderlands Switch and Zombie Army Trilogy thinking they had good gyro (they do), but this is way more responsive and feels more like Splatoon. It even has a recenter button which I don’t think I’ve seen in a third party game before. It completely blew me away when I took control of Duke in the first level. This was one of the first FPS games (along with Bungie’s Marathon) to let you look up and down with a mouse, and now it’s re-invented itself again for console aiming. It’s so refreshing to see them take motion controls seriously and it feels very authentic to Duke Nukem’s ambition.

Compared to other shooters of the 90s I really enjoy the colours of Duke Nukem. This game takes its art style from pop culture rather than fantasy, gore and hell. You’ll go through real buildings, streets and caves and such as you fight off the alien invasion of Earth. The graphics have stayed in the same style as the original release, with a few touch ups. You can switch between the original engine and effects to the new one, with a single button press (down on the dpad). I made a comparison of the two, it’s mainly new lighting and slightly crisper image quality you can notice in the second pic. (click to enlarge)

There’s just something extra cool about a game pushing the limits of older hardware. It requires a skill to capture your imagination, that photorealistic graphics can’t capture. You have to build things according to how they “feel” rather than make exact replicas.

This game came after Doom but still broke ground with its unprecedented object interaction. I have not actually been able to destroy a toilet in a modern game for quite a while, and legit had my eyes wide open when my shotgun left water shooting out of the destroyed pipe after I blew up a toilet in Duke Nukem 3D. You can do lots of silly things like destroy taps and blow up some walls, crawl through vents, destroy bins, and the mirrors actually work. You can even shoot yourself with a shrink ray by using it on a mirror. It’s not just mindblowing for 1996, but this “approach” to interaction still makes the game fun today. 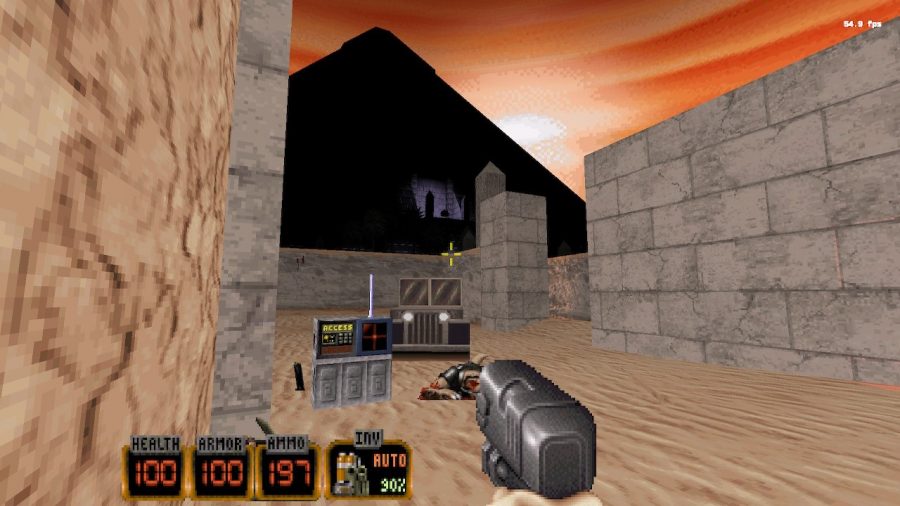 Could it be, aliens were behind the pyramids all along? No, this is Duke Nukem going on a World Tour Baby! Now might be a good time to mention this game’s actual title, Duke Nukem 3D: 20th Anniversary World Tour.

This comes with an entirely new chapter made by some of the original developers (and new ones), 20 years after they were finished with the original. It uses old tools for authenticity, but takes advantage of new hardware power to include much more detail and objects while keeping the framerate together. The end result looks amazing and really got me excited like it was a brand new Duke Nukem. This “Alien World Tour” takes you across real world locations, detailed in beautiful pixelated glory. These nostalgic graphics only enhance the atmosphere of this game, giving it a truly unique alien invasion feel that would not be as believable with modern graphics.

Another cool feature added to this remaster is developer commentary. These sound files are placed INSIDE the levels for you to interact with, just like hitting objects or switches. They offer very cool, casual and interesting insights to the development of the game and locations. I enjoyed listening to all of these like it was the 90s again, and they talk a lot about the new levels and what is possible now, compared to back then.

I’ve heard people say this has issues in handheld mode but I haven’t been able to confirm that. I’ve played a handful of levels but everything stayed at 60fps, the only negative I can say is there was no motion control with the Joy-Cons attached. Just be wary that if you play in handheld exclusively there might be issues. Otherwise in docked, I’m very impressed with the consistent framerate and image quality. My overwhelmingly positive impressions are from playing docked with the Pro Controller.

This game really is an all-time classic and it’s so nice to have this on Switch. For anyone wondering how to input cheat codes, I couldn’t find them either, but I copied the cheat button inputs from the PS4 and XB1 versions and it just worked. So for Switch, during gameplay you press down on the dpad, Y, right stick in, right on the dpad. Just press all 4 inputs consecutively, and you get a big list of party tricks. There’s also a rewind feature in the main menu if you want a more modern style of cheating. Now if you’ll excuse me, I’m needed on the Golden Gate Bridge.