After enjoying an obsessive amount of Nano Assault Neo on Wii U, I’ve been eagerly awaiting the Australian release of Nano Assault EX on 3DS. It still hasn’t come out but that turned out to be a blessing in disguise. I’ve taken the plunge into the unknown, changing my identity to discover the joys of the UK eShop. It’s a simple as switching your 3DS region setting and it really is a joy to browse, there’s about 100 DSiWare games here I’ve never heard of because they didn’t make it past the expensive Australian rating system. Anyway, Nano Assault EX was my first multi-region download and my 3DS wasn’t ready for this explosion of awesome.

Really, it wasn’t ready. I don’t have the Circle Pad Pro attachment and this game depends heavily on it, finding out I had to use a 4-button layout in a twin stick shooter was a big letdown. You can only aim in 8 directions and diagonal shots are awkward to execute this way. I was also greeted with a sluggish framerate and the worst screen tearing I’ve ever seen (and the first time I’ve seen it on 3DS). It feels like the screen is crying in pain as it splits into thirds and tries to put itself back together, creating a weird wave on the screen in 3D mode. So here I am barely able to control my ship and I can hardly see anything; a really bad first impression. If I worked at IGN, Edge or Gamespot I’d call it a day right here and give the game a 3 out of 10. 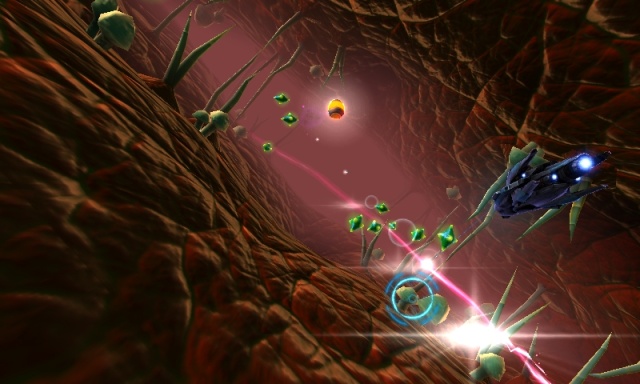 Thankfully the game has another type of gameplay level, StarFox-style flying where you aim with the traditional Circle Pad. These levels look absolutely stunning, and while the framerate still isn’t perfect it’s much better than the twin-stick levels and has no screen-tearing except for one level with a watery surface (in fact the screen-tearing is so bad it makes me wonder if it’s some kind of splash effect gone wrong). Huge lively enemies swim around with robust animations, and obscure looking growths stick out of the cells surface and wiggle around. Bullets launch towards the screen in 3D and it looks incredible, the bullets themselves have depth. Then each level is topped off with this game’s crowning achievement – the boss fights.

Some of the boss fights are absolutely phenomenal, this is where Nano Assault EX takes a giant shit on the Wii U game. Instead of simple bosses that can be destroyed in 5 seconds with the right attack, these bosses put up a real fight. They have multiple stages of evolution, different attack patterns and they run through destructible environments daring you to keep up. There’s also a Boss Rush mode; which would have been my favourite mode if you could actually play all the bosses. Instead it’s split up into Boss Rush A, B and C with only three bosses in each option. There’s also one cool mid-game boss missing from this mode for some reason. Nevertheless, it’s still nice to play the best parts of the game without going through full levels in story mode to get there. 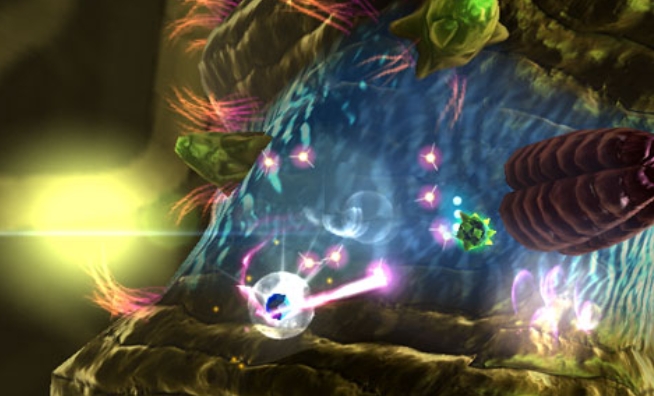 While the framerate in the twin-stick surface levels takes a big hit and the controls suck, the level design is quite interesting. The levels feature mazes, switches, moving objects, sliding doors and cells so big they have warp points. To counter any possible confusion on these huge cells, they’ve added some data on the bottom screen telling you how many enemies are left and how many regions remain unpurified. Unfortunately the map itself is frustrating, you have to pause the action to see it unlike the Wii U game, and it’s hard to figure out which way your ship is facing because the directional arrow is wrong. When you rotate the angle of the map it ALSO rotates the direction your ship is facing so you have no idea which way to go. When most levels are round surfaces this creates a huge headache, there’s often 1 final enemy remaining that takes a long time to track down. I found myself having to identify landmarks on the map, then going there in the game just to get a point of reference.

While there are some cool sights to see, the gameplay itself never really has a chance to shine. There’s just too many things to blame while hunting for high-scores.

“Oh, the framerate died and the enemy teleported into me”

“My ship was in between those bullets and I still got hit?”

“My thumb slipped on the circle pad”

“My bullets can’t penetrate that angle“

None of that is an issue in the Wii U game, which runs at a perfect 60FPS at all times with two responsive analog sticks. The framerate takes a huge hit mostly when there’s a ton of bullets on the screen, which is precisely the worst time for it to happen. Furthermore, half the levels require a Circle Pad Pro to play with precision. It’s impossible to even use the combo system in this game when you can’t aim for specific enemies and chain them together, instead it’s all about positioning. By the time you’ve rotated around an enemy to line up a shot the combo-counter has expired. It would be a different story if you have a Circle Pad Pro but I have no interest in turning my 3DS into frankenstein, and I played Resident Evil Revelations just fine without it. This is the only impression I can give, and it rubs me the wrong way that a game was designed to use this so heavily when it’s not part of the 3DS. The system has a touch screen that developers seem to have forgotten.

Overall I’d say this game is worth it just to see the most incredible texture work done on 3DS and some really fun boss fights. The graphics are such a mixed bag; some levels blew me away with textures that wouldn’t look out of place in a Wii U game, but the 3DS just can’t handle it and some parts are almost unplayable as a result. It also has a deeper 3D effect than most games, it looks great but I had to hold the 3DS further away to appreciate it. The level-design is inconsistent but I still plowed through story mode with excitement just to see how crazy the next level was. I might sound disappointed but it’s still an amazing game. It screams “look at all this cool shit!“, and some people might prefer that (most of you, considering nobody on my Wii U friends list even bothered to set a score in Nano Assault Neo’s Survival Mode) but I was hoping for a meatier gameplay experience. Despite having significantly more content I don’t see myself playing this as much as the Wii U game. Nano Assault EX is such a wild, unfocused experience that you have to ask yourself; can your 3DS handle it?