The first game in the Guild 02 series is here, and it’s quite a perplexing one. The Starship Damrey is a game that works best when you have no idea what to expect, making this review very pointless and counter-intuitive to your enjoyment. Nonetheless, instead of saying “go and buy it” and running off into the mist, I’m here to explain why it might be worth your time. If you’re already planning on playing it, stop reading here. 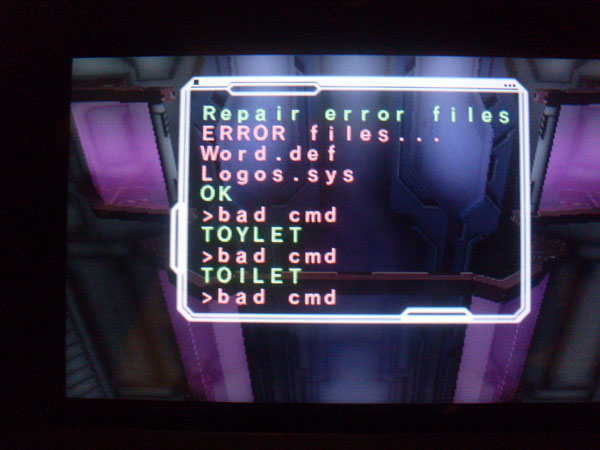 The first thing you’ll notice is the presentation of the game is not very traditional. It just starts and thrusts you into this setting. This is the “intro” which has you boot up a computer by interacting with a keyboard on the bottom screen. You don’t really know why, but the instructions are easy enough to follow, so why not? Once you’ve done that you can take control of a robot and this is how you explore the ship. The robot moves on a grid and you see everything from a first person view, using the circle pad to scan around and get descriptions of objects. The graphics are very basic but the production values are surprisingly high. The objects don’t have much detail and every computer and crate looks the same, but it’s nice and clean and the 3D effect is very good and consistent. Movement with the cursor is also very smooth, lacking any of the stiffness commonly seen in slow moving clicky-click adventure games.

The core “gameplay” involves exploring the rooms and corridors of the ship, and unraveling what’s going on. Is anybody alive on the ship? Where are we going, where did we come from? I’m not going to answer any of these. The game is completely silent apart from the robots clunky movement, because sound plays a key role. In fact, the game warns you to have the sound up otherwise you’re missing the point. I played this game in the middle of the night with all the lights off and I couldn’t imagine experiencing it any other way. You have to put yourself in the situation, the game does a really good job complimenting the feeling of isolation. It felt a bit like when I used to work in a giant warehouse, I’d sometimes show up to work really early and nobody was there. Empty, lifeless, but you know you’re there for a reason. Surely… there’s a reason?

The progression is very simple, the robot can carry one object at a time and you have to figure out what you need to enter certain doors or trigger events. The game isn’t very long or hard, I’d say it took me 3 hours total to complete everything. That’s probably my one complaint, and I hope the game does well so we can see more of this concept fleshed out. The difficulty is also trivial because I wasn’t in that mindset, this is not a challenging puzzle game it’s an exploration through the mind. I was too curious to be intimidated.

If you go in looking for reasons to give it Game of the Year you won’t find any. Everything in The Starship Damrey can be criticised very easily if that’s what your job entails, it ticks none of the boxes of a “quality” game. The graphics are basic, movement is restricted, puzzles are simple. It’s all just enough to display the world and put you there, and the minimalistic presentation ends up adding to the feeling that something bigger than you can imagine is happening. Most of the time when you look around with the circle pad, you won’t see anything. The starship is far from empty, but I find myself still looking into empty corners just because of what could be there.

One thought on “The Starship Damrey – Exploring the cold, silent corner of the eShop”