Commander Video is BACK, and since his WiiWare debut he hasn’t stopped running, making his way through every console, handheld and PC in sight. This review has me a bit nostalgic because BIT.TRIP RUNNER was one of the first games I reviewed for Pietriots, back when we had a brown background, no Twitter account and reviews didn’t have catchy subtitles. Like Pietriots, Runner has evolved its graphics to include more colours and detail, a better font, and triumphantly sports the ridiculous subtitle of Future Legend of Rhythm Alien. 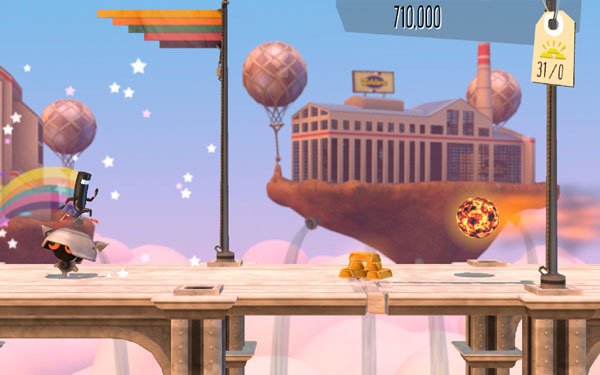 To save you reading that ancient review of the original, I loved it to bits. The BIT.TRIP games were some of the most fun I had on Wii, and to me it felt like the start of the “indie” scene when small games became a significant part of my gaming time. Since then we’ve also seen about a million endless runner clones pop up. Runner 2 uses the exact same gameplay as the original, he runs, jumps, slides and dances his way to the end of the level, never stopping. The biggest difference is the graphics; it’s a lot more detailed and sports a more realistic style that washes over the screen. It’s pretty nice in screenshots but in my opinion the original looked better in motion – because it wasn’t blurry. I don’t know if it’s because of the new graphical style, but I find Runner 2 an overwhelming game to start playing. It always takes me a minute to adjust my eyes to the action, and I sit further back from the TV than usual to take it all in. After that though, it looks great once peripheral vision control kicks in.

The sense of rhythm is perfect and I’m very sensitive to this in rhythm games. I struggled to enjoy HarmoKnight for this reason; even though I beat the entire game I didn’t review it because I felt like I was doing it wrong, occasionally missing beats when I swore I got them. I don’t know if it’s the Wii U GamePad or the sound design here, but Runner 2 absolutely nails the feeling. I’m leaning towards great sound design, because often my eyes lost track of the screen and I got swept away in visual explosions, but still somehow pressed the right buttons at the right time. The game feels magical in these moments and it’s almost like they overwhelm your eyes on purpose just to create this feeling.

Runner 2 is one of those rare score-chasing arcade games that doesn’t make me feel bad for not having a perfect score. I could die a million times and still have a smile on my face. A very aggressive “fuck you” kind of smile, but it’d be there. Sometimes I’d yell at the screen and find the yell would be in perfect pitch to the music, turning my anger into psychotic happiness. It’s relaxing against all the odds, considering the unrelenting pace has you playing the game 100% of the time. Like the original, it’s really easy to restart because you warp straight to the beginning after each death. “Giving up” is not in Commander Video’s vocabulary, because he doesn’t have one and because that’s two words.

Something I really like about the level design is how it doesn’t punish you for taking the wrong path (guilty again, HarmoKnight). The game has an equal amount of gold bars in different paths, so there’s no “wrong” way to go when it comes to completing the level. Before each branching path there are arrows pointing to each one, indicating whether it’s the “safe” way or the “hard” way, which could lead to an unlockable chest or simply a higher score. I really enjoyed the variety of levels, despite doing exactly the same thing they have very good pacing and the music is radically different in each of the 5 worlds.

The Wii U version is great. Runner 2 barely uses the Wii U’s features at all but I didn’t care one bit. In fact it made me realise how much I like the GamePad as a regular controller, comfortable and solid. Having the buttons on each side so far apart makes it easier to associate all the different buttons you have to press in this game. Another positive about the Wii U version is no achievement / trophy system, it has it’s own reward system inside the game instead. The “ding!” sound of a trophy when you do 1000 jumps would seriously compromise the rhythm. If you want to wave your dick around you can compare your scores to your friends instead. The coolest thing here is “total score” which adds your tally from every level in the game, rewarding patient players who like to explore every inch. Unfortunately not many of my friends have the game because like Nano Assault EX, I had to connect to the UK eShop to download it since it’s not out in Australia yet. It was fairly easy to do but with one downside. Now every time I start the system I have to pick the right user account (GRUBDOG or GRUBDOG2), it’s one more step between me and gaming. (If anyone knows a way to make a “default user” please share!)

A new feature in Runner 2 is the ability to dance to get points every time you tap ZR. I groaned at first because I thought this would break the game, like snaking in Mario Kart DS or spin-jumping in the Rayman Legends Challenges App. Spamming one button over and over becomes essential to getting the best score, but in most levels you don’t have time for it and I got over the urge pretty quickly. In fact some crazy levels have open parts halfway through, and I found it liberating to spam the dance button in complete freedom. I also came to the realisation that I don’t need the best score in the world, I just want to keep the music going.

Also new to Runner 2 are loops that involve twirling the analog stick and pressing the face buttons in a rotating order, they’re pretty easy to execute and add some variety to the rhythm. Another new thing is the jolly voice of Charles Martinet, most known for being the voice of the famous plumber Luigi. There’s no narrative during gameplay but he makes the (skip-able) cutscenes before each world entertaining, and his happy voice makes me smile every time I boot up the game. I also noticed the “item select” charm sound from the N64 Zelda games in menus. Maybe I’m crazy but this game reeks of Nintendo.

The game’s momentum must be rubbing off on me because I burned my sweet potatoes in the oven while writing this review. The words, THEY WON’T STOP COMING. Runner 2: Future Legend of Rhythm Alien is simply a lot of fun and it improves on the original with 100 new levels, multiple difficulty settings, different characters and costumes (I haven’t used them, but they’re there) and a million reasons to keep playing. It also keeps stats of every jump you’ve done and seemingly every button you’ve ever pressed, which is a bit creepy but some people are into that. Most of all, the MUSIC is fantastic and keeping the melody going is worth every jump. I recommend this to any Wii U owners right now, it’s a great reason to be playing the console. Unless you’re Australian, but we have bigger problems.