Zelda was playable in two forms at PAX Australia, Wind Waker HD on Wii U and A Link Between Worlds on 3DS. Both games had their own surprises in store that had to be felt in person to believe. Zelda 3DS impressed me with its graphics and Wind Waker HD impressed me with the controls. Did I get that the wrong way around? While Link’s butt does look fantastic in HD, there’s more to it!

The gyro function of Wind Waker is something I’ve been wondering about since it was first announced. OK, it’ll have updated graphics, that’s easy to imagine, but the controls are something you have to feel. To get the chance to PLAY this was huge, and play I did. The demo gave the option of two levels, one inside a dungeon against a bird boss, and the other took place on Outset Island. I spent the majority of my time in Outset Island because I could experiment a lot more with the controls without having an assigned task. Going into first person view is done by clicking down the right analog stick now, and immediately I felt the camera move as I tilted the GamePad. It’s that simple and motion seems seems fully integrated as a core part of the game. Before right-stick purists start spitting at the screen, the right analog stick also worked. I found a combination of both the right stick and gyro to work best, allowing me to rotate a full 360 degrees without facing away from the screen with adjustments on both.

Next I assigned the bow to an item slot, simply by dragging it with the GamePad touch screen. The GamePad screen is beautifully organised, it has 3 tabs; 1 for items, 1 for the map and 1 for Miiverse bottle messages. There was potentially more to it, with an options button and something else I didn’t touch. The bow was one of about 3 items that I had, and the item screen looked very empty because the sail and Wind Waker are now both assigned to different places. The sail automatically comes up when you stand in the sailboat, and the Wind Waker is permanently assigned to ‘up’ on the dpad (songs played the same on the right stick and I changed the wind direction for the hell of it). This effectively frees up 2 more item spaces from the original, and it’s so easy to slide an item up for use that the slots themselves even have less significance. The accessibility felt good, I slid items from the X and Y button maps down to the GamePad back-and-forth without any lag whatsoever. I rode the sailboat as far as I could and it didn’t let me leave Outset Island, but I found two Miiverse bottles floating on top of the water surrounding the island, and one on the shore. They all had generic messages with screenshots attached, and reply’s / yeahs listed. 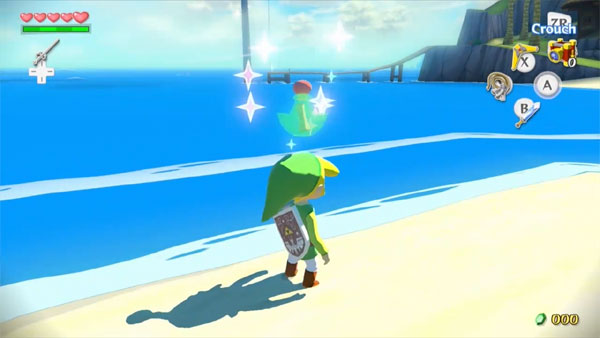 Back on the top screen, I had my bow out now. Strafing left and right with the left stick, I could aim with the gyro at the same time and it felt AMAZING. I dare say this is even better than Wiimote + Nunchuck aiming, because it felt like I was holding up a bow and the gyro was just as quick. The GamePad screen stayed the same and the aiming is still done on the TV, so it’s a bit different to ZombiU and the cursor was a lot faster. I aimed for a tiny pig in the distance and hit it with my first shot, the accuracy startled me. I began strafing forward, still in first person view and hovering the GamePad left and right slowly just to enjoy the view of the island. If you have Nintendo Land, imagine a more fleshed out feeling of the gyro camera in the plaza, in first person. I want every single 3D game to have this control method now. I wish I took photos of this but my hands were busy and most people playing didn’t explore the options much, which reflects all the other journalist impressions I’ve read.

Wind Waker HD looked amazing and it’s very faithful to the original game. My eyes felt familiar with it so it didn’t really wow me, but perfection doesn’t need to do that. Playing through the original Wind Waker on GameCube earlier this year already spoiled me. When I first saw the Wind Waker HD trailer I felt it looked exactly the same as the original, and my opinion on that hasn’t changed. As far as HD remakes go however, this is probably the best I’ve seen because nothing looked awkward and there were no sloppy remains of its original textures and resolution to break the immersion. Maybe I’ve arrived at the point where graphics don’t impress me? …Maybe not!

A Link Between Worlds is absolutely incredible and the smoothness of it made my brain turn to jelly. It runs at 60 frames per second with the 3D slider up and it felt smoother than anything else I’d ever played. It’s very fluid and sharp, and avoids the “generic” look of New SMB with extremely bubbly animations. It doesn’t feel like Link to the Past either, in fact I’ve never seen anything I could compare this too. Imagine Link changing direction; he doesn’t do it in one frame, he makes a swift movement and you can stop anywhere within the turn. Link moves very fast and the simple act of walking is satisfying. When you attack enemies they bounce back and wobble a bit and they’re also pushed in whichever direction you swing the sword. Neither the game map or the characters position is limited to 4 directions, and combat reflects this very precisely.

This demo had 2 options like the Wind Waker one; one was a dungeon and the other a small section of the overworld to explore.  In both of these I had the ability to use Link’s new wall hugging ability, which brings the camera down from the sky to show a paper cutout Link moving alongside the wall. It was a very seamless transition without having to load a different part of the game, which means the entire world is built with a lot of flexibility for effects and interaction. Almost every puzzle in the dungeon was based around this too, and it opened up a lot of new possibilities. There were moving platforms that required you to change dimensions just to stay on them, and walls up high that required a bit of trickery to slide along. I managed to find 2 secrets that wouldn’t be possible if I couldn’t attach myself to high walls, one being a cool window that let me creep out of the dungeon to get outside onto a ledge. The hammer was also heavily required in this dungeon, with a lot of platforms to be smashed down so you could climb onto them. The 3D effect made this vertical progression feel natural, and I slid along walls with appropriately raised / lowered platforms for about 5 stories. It was so much fun experimenting with every wall that I didn’t get to complete the dungeon, but I didn’t want to spoil too much anyway so I was happy to play it once.

Link doesn’t look down, only forward. Both of these Zelda games come out this year and both offer exciting new experiences. I can’t wait to see the brand new Wii U Zelda considering how many new feelings I got from a simple remake. It’s a great time to be a Zelda fan.

4 thoughts on “Zelda: A Link Between HD and 3D Worlds – Hands On Impressions From PAX”