We’ve all heard the announcement by now, Wind Waker is being completely remade for Wii U. The seas aren’t exactly forgotten, but I had a different motive for this article. The Zelda Symphony hits Sydney this weekend and I’ve been playing Zelda games in frothing anticipation, namely The Wind Waker which I just finished an entire playthrough of. I’m so glad I did because it’s every bit as amazing as I remember, it was the great gaming cleanse I needed. When Nintendo made the announcement of the remake I almost shat my pants because I was playing Wind Waker a few hours before the conference and hadn’t even thought about the idea of a remake. The game is pretty much perfect already in my eyes. My last playthrough was in 2005 according to my save file, and playing it now allowed me to enjoy it with a different perspective.

The first few hours gave me a tingling feeling I haven’t felt in a long time. The graphics are stunning, they spark life into everything and allow so much expression with so little. The graphics aren’t simple by any means, they just have a perfect purity about them and some of the effects are simply magical. Just as I was re-acquainting myself with the game the tone changed dramatically. The colourful innocence of Outset Island quickly turns grey as tragedy strikes and a wave of uncertainty sweeps the island. Suddenly the townsfolk don’t have any answers, only questions; as learning how to lift a pot takes a backseat to sword training. Link prepares himself for the unknown. He knows what he has to do, but he doesn’t know how he’s going to do it yet. Who are these pirates? What was that bird? What ELSE is out there?

The next thing I know I’m embarking on an epic adventure across the ocean, fighting giants and collecting treasure! All standard Zelda fare, but it felt like I was a kid in a place where I wasn’t supposed to be. There’s no group of people around me telling me how to do everything, your sole companion is forced to wait on the shore as you talk to strangers and explore dungeons by yourself. The huge size of the ocean is exaggerated further with a general vagueness of which island to visit next. I wanted to explore everywhere and do everything just because I could, I wanted to show the ocean I wasn’t scared of it. Even combat has that daring feeling when you pick up an enemy’s weapon and it’s 3 times the size of you. It’s incredible how Wind Waker manages to feel this way without resorting to extreme gameplay difficulty. 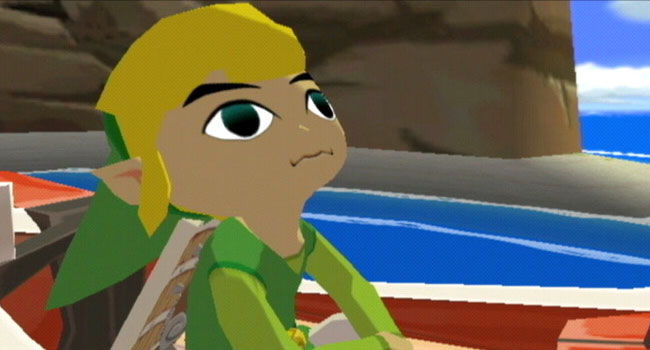 I already had a backlog of things swimming in my head. I’ve just got the colour pictograph so if I head down to the Forest Haven I can join that secret figurine club next door. While I’m there I’ll investigate this whole deku sprout situation, I could try and heal one of the sprouts on the way back to Windfall to see what that dancing guy is up to. I haven’t spoken to him since I got the Wind Waker, i’m sure he’ll be excited to see it and maybe teach me that song. Wonder if there’s a new item at the auction house? I haven’t seen that guy set his shop up properly yet either… and those kids, what mischief could they be up to?

I’m thinking about all this without the game spamming me with reminders, because I have a genuine interest in what’s going on. What time is it? Oh, GameCube doesn’t have a HOME menu with a clock. I’ll just keep playing. While I did have some long game sessions, I noticed that it didn’t cater to my sense of addiction like a lot of games have tried to do lately. I wasn’t focused on loot, trophies, stamps, money or stats. The only thing I wanted to do was find out more about the world. I wasn’t surprising or impressing the game with my awesome skillz, it was surprising me.

There are so many mysteries of the sea that never really get solved, like those telescope guys on remote islands. How do they get there? Where do they live? There’s one on an island towards the south who points you to some seagulls. He’s not sure what’s going on but he’s sure there used to be a fairy there and he’s panicking. You go there and find a giant octopus, who reveals a helpful fairy after you destroy it. After getting the magic bonus, the first thing I did was head back to the telescope guy to see his reaction but he was gone. How did he get off that island with no boat? Did his friends come by to pick him up? Is he magic? Did he… jump in?

It’s hard to imagine a game like Wind Waker ever happening again. No Miiverse, no achievements, no checklists, no notifications, tutorials, flashing lights. Just a great big ocean, as a player I felt alone. Sure enough, the remake is a big talking point right now and everyone has an opinion of how it should be. As much as I love the game as it is, if they’re going to remake it I agree that they should go all out. The original will always be playable. Nintendo said they were going to revamp the gameplay, so here’s some quick ideas I had.

Those are just the ideas I had while playing the game. I’d love to hear what all you guys would like to see, and what you wouldn’t like to see. There’s a lot of potential here, though I think the best addition will be the simplest: widescreen. One more thing before I wrap this up…

The Triforce quest was the best part of the game, because it is the game. If you were driven by curiosity and not backloggery.com then you’d already have most of the Triumph Forks before you even needed them. Frankly, I’m grateful for every reason I can get for more sailing. If you gave up there then you’re not a true hero. A real hero isn’t afraid to get sunburnt, and this is another reason the game is so great. It’s all on YOU, there are places just there ominously calling out for exploration. “What are you going to do, Link?” I’m going to turn this damn ocean upside down, that’s what.

4 thoughts on “The Wind Waker – Sailing The Forgotten Seas”