I’ve just finished playing Resident Evil 6 and after some very bad first impressions, the full game turned out pretty decent. Leon’s campaign was extremely enjoyable and the game does a lot of things right as well as wrong. The game has some interesting scenarios, amazing bosses, great dialogue (by cheesy RE standards), and even good music. One thing I really love are the environments, they are unbelievable to walk around in. The streets of China have ridiculous detail as does almost every area in the game, and there’s some nice unique scenes to enjoy and bask in. I had a lot of joyous moments simply moving the camera around and looking at all the unnecessary detail in every corner. Furthermore the gameplay is extremely robust, and the controls are a good refinement of Resident Evil 4 and 5’s strengths. I think in terms of game mechanics, this is the best Resident Evil to date.

However the the more detail you have, the bigger the mess when it all falls apart, and the things the game does wrong are big enough to kill the mood. While the shooting mechanics are good, they are abused far too much. I simply don’t like shooting games. As a Resident Evil fan, I shouldn’t have to know how to play Battlefield. I’m tired of shooting and after Chris’s campaign I need a break from the sound of gunfire and explosions for a good month. The pacing is relentless and ridiculous, if you can even call it pacing. People troll the game a lot and it’s very easy to criticise, but the significant thing about all these bad changes to the series is they are simply design choices. Resident Evil 6 could have been AMAZING if somebody stepped in and said “this is a bad idea”. In this hypothetical article, I am that guy.

Capcom has invited me to their development offices to flip tea tables over, but I can only destroy 5 of them. These are the tables I would flip.

There is no point designing zombies and monsters if the scariest thing about them is their hand-eye coordination. Having “intelligence” does not make them scary or interesting, I may as well be fighting people in a crappy war game or retail job. When a zombie snipes at me from a rooftop with a laser sight, it tells me I’m playing the wrong game. 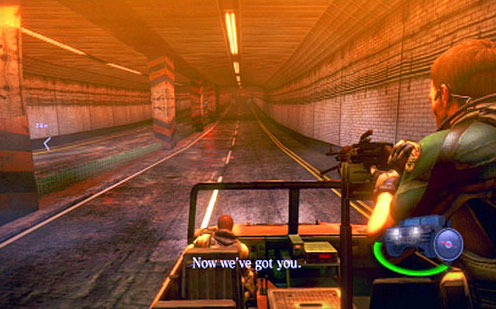 This scene actually exists and shifts into first-person cockpit view when Chris jumps in the driver seat. With L1 / R1 as brake and accelerate, the control stick for steering and X as boost; you have to pull Ridge Racer-style drifts and boosts to catch up to zombies who are also driving vehicles (and shooting from them). Even though the car handles decently, the whole thing is redundant because it doesn’t matter how you drive, the zombie’s vehicles all have varying speeds and you all end up in the same place. Even if the scene did have engaging driving, it’s not something I want to be doing at this moment. I also don’t want to go fishing or play soccer, because there’s a time and place for those things outside a Resident Evil game. Disaster: Day of Crisis, for example.

It’s harmless right? Just a wacky action scene? Sure, if you don’t care about consistency in the environment. This is very important in Resident Evil, more-so than most games. Suddenly the streets of China are huge and empty with no detail or mystery. All the flickering lights, fires and unique objects disappear to make room for this muddy, sloppy gameplay mechanic that lasts 10 minutes.

The helicopters and planes have a little more context but they are just mobile turret guns, and every gameplay “event” that takes place in them is awful. When you take control of a fighter jet and it handles like a toy car in sloppy shit, suddenly the awe of this great machine is gone. Keep that to cutscenes, please. I would rather imagine the pilot is working hard, than know he isn’t.

This goes for EVERY GAME, but Resident Evil 6 takes it to extremes. The large majority (4o or 50) of my deaths were from failing quick-time event button prompts. What a pathetic feeling to strategically outmaneuver an incredible beast, only to get eaten because you didn’t press X fast enough. The mere existence of this gameplay mechanic is bad, but the requirements are extreme in this game especially the stick waggling one. If you don’t know it’s coming, you’re going to fail. Thankfully the death animations in this game are really amusing, but I’d like to die properly thanks. There is no stimulation or reward in mashing a button whether you win or not. If all I needed to do was press X really fast, couldn’t the fight have been won from the start?

Not only are these “events” extremely demanding on the tiny complex muscles inside your wrist, it sucks immersion away from the screen because you’re actually noticing the physical discomfort. It’s more apparent to me right now because I’ve recently done damage to my arms, but the stress should be in my head and not on my body. “Die, awesome scary boss!” becomes “come on, wrist!“. It’s bad. Every single game that uses QTE’s should be ashamed of this lazy gameplay abomination. When humans were smashing rocks together to make sparks thousands of years ago, I don’t think we were practicing for Resident Evil 6. It’s not even fun in good games like Resident Evil 4 and The Wonderful 101. After a full day’s work, I can not play parts of these games at all.

This was such a big table I’ve flipped over, it also had some Turret Gun documents on it. Turret Guns should not exist in dual analog console games because aiming with an analog stick will never, ever be fun. Simple as that. Console shooters are bad when they actually rely on shooting, and when Chris Redfield jumps on board a turret gun you’re saying to me “this is a shooter“. I still can’t believe we’re using analog sticks to aim guns in 2014, but that’s not Resident Evil’s fault.

This game has 7 fucking main characters, need I say more? Well yes I will say more because this table wont flip itself. Resident Evil 6’s story is set up across 4 campaigns to convey the characters different perspectives and give insight into their relationships. The problem is I still don’t give a shit. The plot becomes so convoluted that they’re basically all meat-suits relaying messages just to make sure the 4 soap operas are coherent. Furthermore it means replaying certain scenes in the game multiple times, usually the bad ones because they’re all together in a big open playground of awful gameplay. Even if this game was survival horror, I wouldn’t want any of these people to survive because I don’t feel attached to them. When all 7 of them play exactly the same it also makes you wonder why they are so special.

This is by far the most important thing in a Resident Evil game to me. The fact that everybody in the entire world is talking to you leaves nothing to the imagination, and this sole aspect prevents Resident Evil 6 from having any kind of atmosphere. Resident Evil 1, 2, 3 and 4 all have brilliant self-contained environments that become the entire world. Even if you do make it out alive, what’s waiting outside? Doesn’t matter, this situation is more important. You can still have Presidents and companies on the outside, but it’s more interesting to find out about them through paper trails than worldwide Skype conferences. The whole isolation aspect make the environments feel like “home” and give a purpose to your individual actions. It makes you not only appreciate every detail in the environment, but every detail that isn’t there. Resident Evil games are great at having mysterious vague backgrounds, and I often look out at them and wonder what could be happening. It’s a manufactured but coherent perspective, because you’re supposed to be the player of the game.

Before I died from Capcom’s confusing office design, I made a plot suggestion for the next game. There needs to be a virus that wipes out all technology. Leon cries about his smartphone not working and goes through withdrawals, seeing imaginary people he used to Facebook chat with. The intro sequence involves killing them all as zombies in the corridors of Leon’s brain, which resembles a prison. Then he wakes up, smashes his phone, turns it into a blade and becomes a man again. Resident Evil 7 now begins, and I have faith that it can be salvaged after the backlash 6 got, and with the appropriate tea tables flipped over. On that note, the low reviews surprise me because I still think it’s a better shooter than most western games that get 9’s and 10’s and commit the same crimes against gameplay. I’m glad I still gave Resident Evil 6 a proper chance because the developers at Capcom are still extremely talented and haven’t lost their touch, they’re just touching the wrong things.

5 thoughts on “5 Easy Steps – How To Fix Resident Evil”