Hee hee hee!! It’s myyyyyy turn. Throw your shovels away and bust out the beakers, because we’ve got a spell to concoct. With the Essence of every Knight I’m going to make a spell of ultimate power that will allow me to do anything I want. The bravery of these clueless Knights just makes me want to hurl, it’s so cliche. With special potions and smart movement I take advantage of their predictable Knight-like behavior. That’s it, run towards me. Right into my bombs. Too easy, AHAHA. My campaign has taken place in the shadows, and I’m not going to charge anyone or demand anything, just so I can stay underground in my laboratory and continue being brilliant. I have stealthily arrived in Shovel Knight as an automated download, but nobody cares about him. His essence is merely an ingredient in my potion. The other Knights are too stupid to complete anything, so there’s also a password to unlock me. Assuming they can read, HEE HEE!! I merely picked the sneakiest method to execute my devious plan. This is the real story, while the other Knights fight for glory and take each other out, we’re about to take control of the entire world.

My movement is very confusing to people in this land of generic Knights, because *sigh* nobody else even tries anymore. You just want a standard jump, whack attack, maybe a down stab? ZZZZZ, BORING! I will make you dance and get those juices going! Press A to throw explosive grenades, BOOM! AHAHA. This is my primary attack and it’s so funny watching things explode. I can even blow up my own servants and watch them tumble off the screen. You know, the screen in the laboratory. Hee hee. While my personality is crazy and unpredictable, my jumps are the opposite. Calmly taking in the entire screen allows me to fly where I want with reliable button inputs. My jumps are shorter than the average Knight, but a double jump takes care of this insecurity. My real trick is the BOMB jump. Hold the ATTACK button and I’ll start glowing. I just get excited, y’know? I’m about to unleash. When I let go of the button, a burst jump shoots me across the screen. It goes much further than any regular jump combination, and this is how I clear a lot of tricky rooms. Jump, Jump, BURST, and I’m there. If something gets in my way and knocks me into the abyss, then I probably should have looked around the room before exploding across it.

These simpletons don’t understand. A real alchemist puts in the time to learn these things. Every good spell starts off with a big mess of dying and confusion. You just have to get excited enough to get the other ingredients in your brain flowing, like creativity and patience. That’s why I make explosions, to get these things out of you. The process is the gameplay therefore every failure is time well spent. When things get crazy I’ll be doing jumps and burst jumps at the same time which sounds tricky, but it’s only two buttons. You just have to know how to extract the most out of my jumps, and the key is spacing. If there’s an enemy in the way of a jump, it’s important to focus on them when you start charging the burst. With the standard bomb attack, enemies have to be below you at a certain angle to get hit, but you can get above them in a number of ways to hit them. This distance is important because you won’t be able to attack an enemy right next to you. Once the enemy is in range of your bomb trajectory, BOOM BOOM BOOM!! You have to make the most of this opportunity to attack before hovering back down to the ground.

The approach to tricky rooms is finding the right path for your jump trajectory, and clearing any enemies out of the way so when you jump across the screen like a madman nothing goes wrong. Very quickly you start to see “zones” around objects where you should be placing yourself, in order to hit or avoid something. It’s a gameplay style that’s not going to click all at once, but you’ll have more and more brilliant moments the more you play. With enough practice you’ll feel like a genius mad scientist, which I highly recommend. It feels amazing to be me. Hee hee.

I’ve got so many additional techniques thanks to all my research. Bombs can be curved, thrown up instead of down, explode at different times, and I can hover, create platforms, do a dash attack and more. It’s just inevitable that I beat every stage with so many tools. I don’t even need them all but why not have a great time? If you like to throw things up instead of down, you can tackle the stages in a completely different way. If a certain approach is not clicking with you, keep your head up and you’ll unlock more movement options. They are all useful because I’ve found so many ways to infiltrate these moronic Knights Lairs. Just be yourself, while being me. Ahaha. Look at me go. 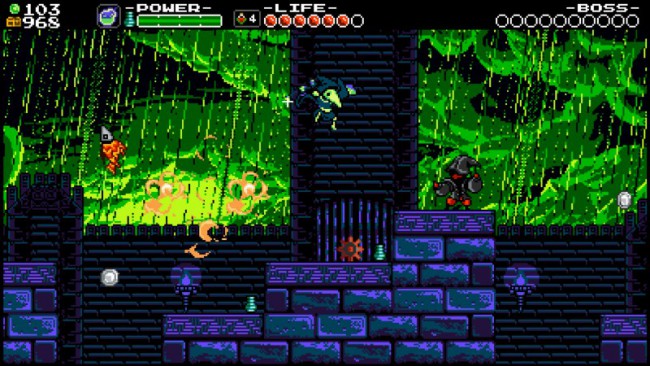 My story is full of charming touches and surprises, and you might even feel some emotional attachment by the end. I’m not going into that because my feelings are my business and I benefit from ignorance. All you need to know is the gameplay is amazing. Every step of my campaign is a beautiful mess of crazy inputs and satisfying execution, it’s what every true alchemist should embrace. It’s not even hard once you wrap your head around what you can do, in fact many Knights fall down easier to my trickery because THEY are the ones confused. Not me. I know exactly what I’m doing. I just need one more essence for my potion now. My plan is so brilliant I just can’t see it failing. AHAHAHAHA. Here I come, Enchantress. The world will be mine.

2 thoughts on “Plague of Shadows – Erratic and Free DLC”

The Piecast is a few friends from across the globe shouting at each other about video games. We aspire to doing this weekly.