Night has fallen, for the first time in weeks. That means it’s finally time to slee- no, it’s time for SPLATFEST! I made my way to the plaza and couldn’t believe my Inkling eyes.

Hoverboards! In the sky! WHAT YEAR IS IT?! I jumped down to the Ballot Box to see what was going on. Jet Packs vs Hoverboards? I looked up into the sky and didn’t see any Jet Packs. Hoverboards seem way cooler, oozing style and effortless freshness. Jet Packs just seem like an unnecessarily complicated pain in the butt.

I decided to walk around the plaza to get some info on these new Hoverboards and Jet Packs. Hoverboards are quite obviously for riding with your feet, but what about Jet Packs, don’t you need your hands? How do you splat with them? Surely someone on Team Jet Pack could explain how they worked.

Uh… okay. Thanks Will. I’ll just be over here with my hoverboard friends, being cool and making sense. 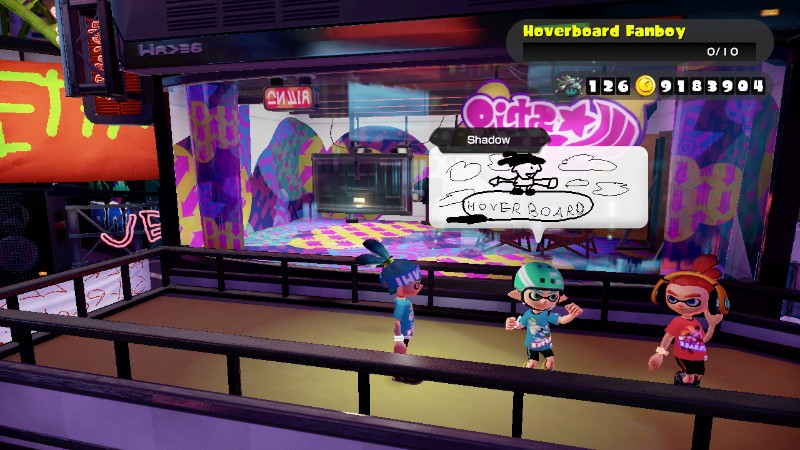 That is one sweet hoverboard Shadow. Look at him, soaring majestically over Inkopolis with his clearly labeled Hoverboard. That is how you sell a concept. This Inkling in the Jet Pack shirt had to put headphones on to cancel out the coolness.

Deine Mama tried to explain to me how Jet Packs worked. A whole bunch of complicated words and blah blah blah, you just fly high. She had NO IDEA. Couldn’t even draw me a picture of one.

My friend Mouse faced the same dilemma, how do you even use them? Was there any benefit to Jet Packs at all?

Some jellies were chilling out in the plaza, I thought they were just here to dance but it turns out they were a bit lost. They’ve been trying to get to Mahi Mahi Resort but took the wrong train and ended up here. I had room on my hoverboard to take somebody with me, so I offered the Team Hoverboard jellyfish a ride. Sorry Jet Pack supporter, I can only take one and there’s no more room for you.

Off we go, jelly. Get on my HOVERBOARD!! 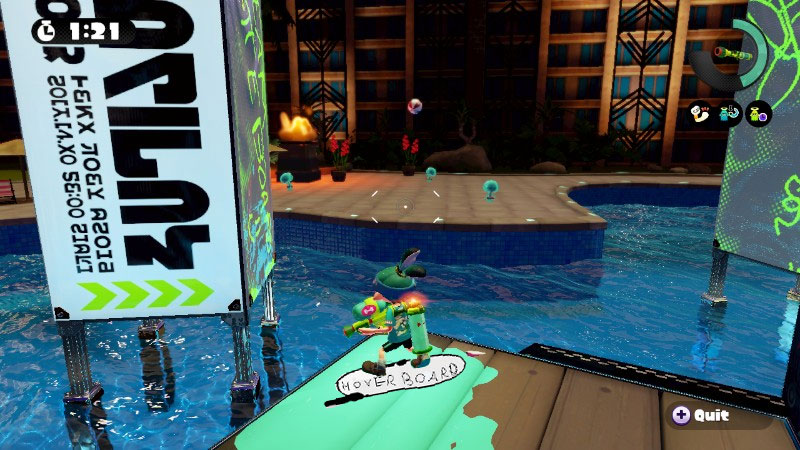 I landed my Hoverboard at the Resort and dropped the jellyfish off with its friends. They were all having a lot of fun playing ball. Meanwhile, the Jet Pack jellyfish back at the plaza was still lost. It was going to miss out on all the fun simply because Team Jet Pack are too useless. This kind of helpful transport is simply not possible with a Jet Pack, and their teamwork in the Turf War was going to suffer from it. I felt a bit sorry for the Jet Pack jellyfish and almost flew back, what if it picked the wrong team by mistake? Nah, there are Turf Wars to be had. I’m too cool to care.

I flew straight into the lobby to get started. Wow, it’s so much easier to get around now. Why didn’t I get a Hoverboard sooner? The first match was at Mahi Mahi Resort and I saw my jellyfish buddy on the sidelines cheering me on. It looked like they were still having fun with their ball, and that made me happy. My team made our way to the middle of the stage, coming from different directions because we all had our own style. Hoverboards allow us to express ourselves like that. We arrived in the middle and there was no other team in sight. Instead of advancing to the middle, Team Jet Pack had flown STRAIGHT UP! Taking advantage of their slow start, we effortlessly hovered over the gaps in the water with our hoverboard technology and invaded their side of the map. It was complete domination as Team Jet Pack spent the whole match exploding, trying to figure out how to use their Jet Packs.

This happened quite often as I surfed the skies from team to team, kicking arse and shooting down Jet Packs from the sky. We all leveled up our Splatfest Power with relative ease, as we simply enjoyed what we were doing. There was no complicated science, no refueling, we just cruised the night sky with our own rules.

Team Hoverboard was unstoppable with a team of champions carrying the next round. We were ready in the lobby for a good few minutes before Team Jet Pack showed up, it took them a while to refuel and maintain their machines. They were not fresh at all. This match was at Saltspray Rig, and we claimed the top square with style, dropping squid beacons as we landed. Now we could go anywhere we wanted and jump straight back. We had freedom, flexibility and freshness. We had won the Turf War.

On the right path of the map you can see where someone on Team Jet Pack flew out of control and crashed. The picture is a bit blurry because I was going so fast on my hoverboard and laughing so hard.

The reliability of Team Jet Pack was so bad that Team Hoverboard started getting matched up with other teams from Team Hoverboard. We all had a great time as we skated around busting tricks in the air, embracing the freshness and freedom. At this point we knew we had won the Splatfest and started congratulating each other. I have to give a shout out to my Team Hoverboard friends Teemu, Marnic, Diogo, Drache, Alex, Manol, Splatrick, Andrew, TriforceFp, KS*BlueG, Hisashi, Jennifer, Louise, SypherB.R., Duke, Evan and Scott. Stay fresh. There is supposedly a top 100 list somewhere, but it seems to have burned up from Team Jet Pack’s antics as they crashed into numerous buildings in their Turf War struggles and made life a bit difficult for Judd and the officials. I will update this if it becomes available.

To celebrate our victory I rode back to the plaza for something to eat.

Amande had made Aerosteak (too excited for proper spelling) using some of Team Jet Pack’s remaining parts. Their losses had left tanks and canisters littered all over Inkopolis, and unlike the extinct humans we scooped them all up on our hoverboards and put them to good use. Jet Packs had become useful at long last, and the Aerosteak was absolutely delicious.

A meal fit for the Hoverboard King.