Bunnies everywhere. To the left. To the right. In the sky. Under the ground. They’re getting closer. PEW PEW PEW, come on, come onnnnn. MORE BUNNIES, ARE YOU KIDDING ME? PEW PEW PEW and I’m dead.

Blast ‘Em Bunnies is an “endless” shooter for 3DS that combines RPG mechanics with shooting gameplay for an addictive experience. I’ve been playing it every day for the past week and had quite a bit of fun just mindlessly shooting bunnies over and over.

Aiming is done with both the 3DS analog nub and gyro. Motion control is optional, but I just love the combination of both. The best way to play is to use the nub to guide the cursor in a general direction, then use the gyro to correct it and get that added precision. Exactly like Splatoon, except a bit slower. There are sensitivity options but I still wish they would go higher, as it takes a few seconds to spin 360 degrees. Thankfully you have a map on the bottom screen at all times, so you can decide the best direction to turn for optimal bunny shots. I mostly play this by holding the 3DS up right in front of my face, with my finger just resting on the R button for shooting. It’s not a whole lot of effort as tilting is minimal, I can even play sitting back on my chair. It’s pretty easy to zone out and relax while playing this game.

The graphics are really basic 3D models and textures, but the style has some charm and colour to it. There are so many existing products with bunnies and rabbits that it’s hard to make them feel like new characters. This game manages to feel fresh with bunnies taking on a cheeky, evil, and somewhat unsettling nature as they approach you with intent to kill. The 3D effect is great but there’s some slowdown when there’s a lot happening. A frenzy round will absolutely destroy the framerate, but luckily you are invincible so there’s no real reason to get upset.

As you can see there are different kinds of bunnies. A fat terminator bunny who takes quite a few shots to get down. Fast running ones you have to anticipate. There’s also flying bunnies, and ones that will dig holes and come up somewhere else. A boss bunny will pop up every so often to terrify you. You have to shoot its bandaged belly to knock it over, then a parasite (I think? Bad turnip?) explodes out of its tummy, exposing the weak spot. It’s like taking down one of those chainsaw freaks in Resident Evil 4.

The challenge of this game could best be described as “open”, with different Missions highlighted depending on your level progression. I’m not really enticed by achievements but I’ve been enjoying trying to survive as long as I can. It’s an odd type of gameplay challenge because there’s no real precision shooting involved, giving it more of a strategic feel. The bunnies are quite fat and it’s pretty amusing pushing them over and pounding their bellies. It can seem like the easiest thing in the world then suddenly you’re surrounded. A new wave of flying bunnies has spawned while you were poking the fat one’s belly, and some of them can be tricky to follow if they are burrowing in holes. I find it engaging because you have to always be paying attention and time your shots cleverly. If you just spam the shoot button your weapon will overload, and the smell of burnt corn will escape your 3DS as bunnies rip you to pieces.

There’s a lot going on, even when you’re not facing imminent death. After you kill any bunny they’ll drop coins all over the place. They don’t instantly add to your counter, as you have to shoot them again to pick them up. This adds another challenging element because it’s easy to get distracted by picking up coins while new enemies are spawning. Multiple items will also spawn on the field, some helpful but some not so much. You can get cool temporary bonuses like a coin magnet, or x2 multiplayer. You can also grab boxes that will change your main weapon, and while this adds an interesting dynamic aspect, I found it annoying sometimes when it switched to a weapon I didn’t want.

Sometimes a box will be right in front of an enemy you need to hit. Welp, fine. Guess I’m using the Turnip Mortar for a little while. To be fair, that’s the only gun I don’t enjoy that much. It’s effective but I just really love the Bean Laser and Watermelon Seeds, and I quite often died from picking it up. There’s also multiple types of food you can use as ammo, like heat-seeking chili seeds and sticky raspberries. It’s pretty fun to experiment when you unlock things for the first time. The music in this game isn’t that great to be honest, it’s not bad I just didn’t find it memorable or too catchy. What I do love though are the sound effects, they add a bit of personality to each gun. Furthermore, sound effects play a role in the gameplay because you can hear a “wheeeeee” almost siren-like sound when Grenadier Bunnies are launching turnip grenades. This is really helpful because you obviously can’t be looking 360 degrees all the time, and if you hear a turnip launch you can just look up and spin around. 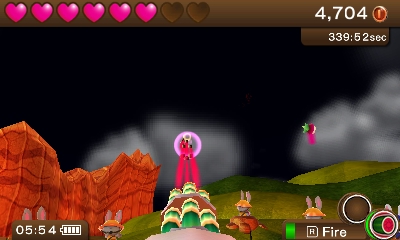 Here I’m specifically keeping these Grenadiers alive to launch grenades, so I can shoot them in the air and clear the “shoot 30 grenades” Mission that just popped up. The constantly changing objectives make the same Survival mode feel fresh even if you’re playing the same stage over and over.

The “content” in this game is a bit different to a traditional release. You basically get 2 main modes, Survival and a 2 minute crazy score attack. Coins are the main currency, and you can get these in either mode. They have multiple difficulties and the first time I played Hard and Very Hard in Survival I got destroyed. Then I realised I hadn’t bought any extra hearts, and I could also add another barrel to my Carrot Rifle. All the main weapon upgrades can be obtained with in-game currency, however the game is loaded with additional DLC.

I found this extremely off-putting at first, but none of it is necessary to “complete” the game. You can buy different arenas, and different skins for the enemies. I can’t give any impressions on those, but I’ve gotta say I just don’t like it. The game is an extremely cheap $7 AU to begin with, so all this Day 1 DLC was obviously just the way they wanted to sell it. Even though I don’t like it, I reluctantly understand it. In an ideal world they would feel confident releasing everything as one product, but that just doesn’t work anymore. escapeVektor had 20 hours of content and people still wanted it for free on PS+. The market right now is really fucken weird, and this store is a reflection of that to me. I feel the same way seeing 50 different paid costumes for Smash Bros listed over multiple pages on the eShop, it’s just a mess. Looking at it objectively, the core gameplay is solid and complete, and the option is there to add more aesthetics to it.

It didn’t blow my mind with arcade precision like escapeVektor, but it’s a different kind of experience. Blast ‘Em Bunnies is a fun game with good controls and a refreshing personality. Just keep those charming bunnies at a safe distance or they’ll be picking watermelon seeds out of your corpse.