Exclusive to New 3DS, Lifespeed is a futuristic racer with a lot of speed, weapon powerups, a story mode, and online leaderboards. It’s the first game by Irish developer Wee Man Studios and a very ambitious concept to start your industry portfolio with. After extensive play I have to admit the game has a lot of flaws, but at its core the racing experience is very enjoyable.

The first mystery is the speed of life itself, how fast is it? This question is left open to interpretation because the game does not have a lap timer, or speedometer. It also does not have an accelerate button, so you just glide ahead on autopilot and use the circle pad to turn and avoid obstacles to keep your speed. You can brake with the B button while taking sharp corners, but it’s difficult to tell when to use it. There’s no sound effect or visual indication of your braking or deceleration, and no sensation of speeding up when you align it, with no speed or timer for reference. It’s also difficult to see when a corner is going to be sharp or not. The 3D tube-like map on the bottom screen helps quite a bit though.

The gameplay confused me a lot at first as I tried to figure out all these elements at once. It’s easy to control the vehicle with the circle pad taking you up, down, left and right like Star Fox, but very difficult to tell if you’re doing it fast or not. Luckily, I did get used to all these things, and the game feels good when you realise you’re doing it right and catching up to the CPU. After a single championship I knew the controls, the stage hazards, and how to utilize weapons and suddenly the game is a lot of fun. Auto-accelerate is normal, and probably a good thing to save you holding A the entire race. A tap of the brake before the corner will allow a good speed while turning through it, which is the same as real racing really. The core circle pad movement is the only thing you’re left with, and it’s very good. The courses all have their own obstacles but you have such a high degree of control over the craft that you can move out of the way at the last second, and it feels amazing when you can maintain your speed and blaze past everyone.

The 3D effect is the best thing about the game, it has very impressive depth and it never breaks. Perhaps an outcome of being New 3DS exclusive is they could focus on getting the most out of this. It’s so good that even just cruising straight ahead is enjoyable by taking in the sights. There’s some nice busy track detail as well, although sometimes too much. 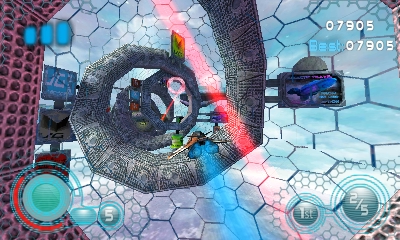 Whoooaaaaa!! This is meant to be the outline of the tube but it’s a clusterfuck of a visual while racing. Luckily, all you have to do is drive straight here so it’s overwhelming, but not in a negative way. I just aim for the rings, which either restore your health, give you boost, or give you a weapon. Even with a few confusing moments, the track detail is definitely a good thing in this game and creates an immense feeling of speed as things whiz by you. Sometimes you’ll see huge ships fly over the track and it’s awe-inspiring. The tracks feel really authentic when there is so much animation around them, it’s just buzzing with atmosphere.

With all my initial grief with the controls I must be bad at the game, right? That’s the funny part, I’m the number one player in the world on the leaderboard. 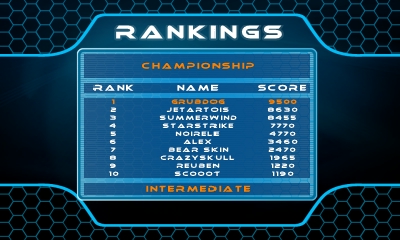 Me and my buddy Jet had a good back-and-forth for a while, but I’ve come pretty close to maximising the score now. All it takes is a bit of practice. Something else you’ll notice is the lack of players. All you have to do is finish a championship (on any of the 4 difficulties) and you will be in the top 10. Win every race and your default score will be 8000, so it seems like a lot of people gave up. I can’t help but ask myself, where are the game reviewers? The people who are meant to learn a game’s mechanics are nowhere to be seen, in yet another Indie game’s community. I hope they are never racing for our planet’s survival.

The points system rewards you more for good racing than good driving, which gels well with this style of game. You get 1000 points for a win and extra points for destroying crafts, potentially hundreds more. So if you cruise to victory and never make a single mistake, you’re missing out on points. I abuse this by hanging back on the first 2 laps, braking and simply not taking shortcuts in the game. Falling from 1st to 6th with perfect smooth cruise control, then unleashing my weapons to get back up to 1st on the final lap. I suppose that could be seen as depth, intentional or not.

It is quite satisfying to destroy other vehicles, and the game has a good lock-on system that centers itself to confirm you’ve lined up another craft accurately. Weapons include a missile, some kind of machine gun you can spam (my favourite for points), a bomb you can drop, and a useless shield that lasts 2 seconds.

I’ve been talking a lot about the core gameplay but the main mode of Lifespeed actually emphasises the story more than anything else. It’s not a masterpiece or anything, but I found it refreshing to see a story in a racing game at all. Comic book style panels outline a story that involves overthrowing the government by winning races you’re not supposed to. Everyone is racing for their planet’s survival. It’s a classic exaggerated videogame scenario that fits the game and genre perfectly. In addition to this, Lifespeed has racers with fun descriptions and backstories, much like the F-Zero games. I wish more racing games did this. They are simply made-up paragraphs but add a ton of charm to the game. I think my favourite is Sakri. She is part of an Arachnid human-like species that descends from spiders, despite this game taking place in 2048. That is some fast evolution.

Lifespeed has a lot of presentation issues, but at its core the gameplay is very enjoyable. Good enough that I replayed the championships quite a few times to improve my score. The sensation of going fast without making mistakes is exciting, enhanced by good looking tracks and an impressive 3D effect. I should add that I did not get (or ask for) a review copy. I bought it myself for $9 AU. It sucks that I have to mention this, but reviewers have become so lazy with Indie games lately and I feel like being as transparent as possible is the answer to this. I tweeted with the developer about the leaderboards not working. It turns out, if you close your 3DS or access the Miiverse / Home Menu during a championship, your score will stop uploading. Keep that in mind until they patch it. Oops… TOO LATE WE’VE BEEN HIT!

Lifespeed is flawed but refreshing and fun. The gameplay being so fast and smooth is a huge technical accomplishment from a small dev, and it’s also a nice challenge to have a racing game that controls differently. I enjoyed learning this game and hope we get more new games like it in the future. It’s rough around the edges, but as long as you don’t hit the edges you’ll be fine.