The Splatoon community will be affected at a crucial time. It’s blown up since release, becoming the biggest new IP this generation in Japan and has single-handedly kept the Wii U alive for the past year. It has captured a wide variety of players, and one look at the plaza can tell you a lot of kids have taken a shine to the game across the world. There are a lot of hardcore players, of course, but the key to keeping every rank class balanced is variety. I’m dreading that the sudden paywall will lock out a lot of low-level players and make the experience more difficult to get into. There’s also the fact that everyone is used to getting weapons, maps, and gear for free and that unprecedented generosity could come back to bite Nintendo when it’s taken away. An awful catch 22, but I think Nintendo has justified paying for Splatoon with just how good the content has been. Parents won’t agree, however.

With nothing online being “free” anymore, we have to think about what we will be losing if we don’t pay Nintendo’s yearly fee. To branch off from Splatoon, what other games have had significant free upgrades in the past generation? Animal Crossing: New Leaf recently got a huge update with extensive amiibo usage and new game modes. Mario Kart 8 got a significant new mode with 200cc changing the game’s balance and speed. Super Mario Maker got dozens of updates including free costumes, event courses, new tools, and eventually a 3DS port. Notice a trend here? These games were VERY successful. WE -still- paid for these updates with the overwhelming profits those games made. It was very easy to justify free online to keep those communities and franchises thriving.

Let’s look at lower tier Nintendo games for an example of the other side of the spectrum. The under-performing DKC Tropical Freeze did not receive a single patch. Granted, the game was perfect but all support and advertising stopped when they realised it was a bomb, and Retro Studios have not been seen since. Yoshi’s Woolly World on the other hand was a bigger success, and has since seen an update, a 3DS port with extra levels, animated shorts, and new Amiibo support. This is not related to online play, but an example of how Nintendo justifies continued support of something. Or any company who wants to stay in business. 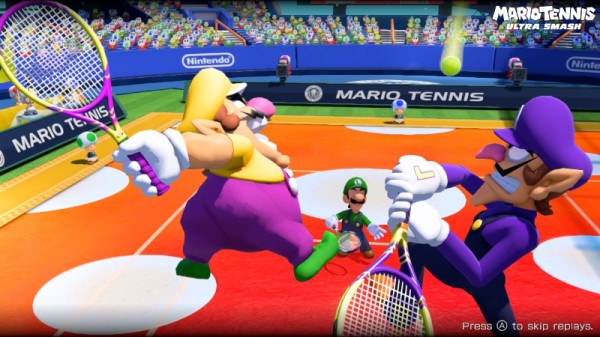 Mario Tennis on the Wii U was clearly made under-budget and rushed so they would have something for the holidays. Wario and Waluigi wanted some quick cash on the court, so it did not even have friend matchmaking. The online mode was there but incredibly basic and useless, and these two buffoons ran rampant. A big chunk of development was also put into modeling Giant Wario’s butt muscles with thousands of polygons.

Twilight Princess HD was also made to give the dying Wii U console some last legs, and will never get a patch to fix its control issues. Just out the door and done. Tri Force Heroes had region-locked online, I’m not sure how they justified that but it makes the game feel like an afterthought. I own it but still haven’t found any EU / AU folk to play with. Luckily this problem is already guaranteed to be solved with Switch being region-free.

Let’s warp back to the main topic now, and tie the discussion together. Nintendo’s new fee changes the evaluation of online support in games. With ONE overall fee for EVERY game in Nintendo’s library, this might justify a solid online experience for the less popular games. Mario Tennis servers will be paid for by the millions subscribed to the program, instead of the 20,000 people who buy the game. They can also take more creative risks with less weight on the game recovering costs. I have a feeling a game like ARMS may have stimulated this decision within Nintendo to cover their bases. They have to go out on a limb for that game and load it with features, but it’s not guaranteed to sell. Code Name S.T.E.A.M. and Metroid Prime: Federation Force also would have raised flags after losing money. They had a huge amount of effort put into online play, and it’s tragic how few people played them (a shame as I love both dearly). These games however would be less of a risk with the online costs out of the equation.

With people having a vested money interest, I’m hopeful gamers will become more active and bring these communities to the next level. You gotta get what you pay for, right? We may see less disconnections in Splatoon and FAST if people actively decide to be there.

Fast, free, but so lonely.

With Switch launching in a month the lack of information is my biggest problem with it. VC games are another mystery I could write a whole other post about. Nintendo is expected to give Wii U owners the ability to transfer all their stuff for free, but with one screen obviously they have to retool the way the games are played. Nobody knows what games or systems to expect.

Miiverse is another big question mark, but that’s another catch 22 for them unfortunately. Many passionate gamers I know on the Miiverse do not post on social media anymore, which is a ton of free advertising for Nintendo lost. It’s the most incredible community that nobody will ever see. An unfortunate consequence of the community being inside the console. If you’re a casual gamer posting on Twitter and see #PS4Share, it appears to be the only console that exists.

Miiverse in its current form is not in Nintendo’s best interest, sadly. I saw the writing on the wall when google ads started showing up on the browser version of Miiverse. To me that felt like Kimishima stepping in, and asking “Why do we have this useless service that’s not making money?”. This is the new Nintendo without Iwata, or at least my irrational fear of it. I will be devastated if the Miiverse is gone as I have made many friends there. It should be revamped and improved, rather than shut down. Feel free to sign this petition if you agree.

The question of Nintendo Dollars is ultimately up to Nintendo to answer, but I hope I’ve brought up some things you might not have thought about. For me personally, all they really have to do to justify it is keep their content active. Continue exactly what they were doing with Splatoon and stuff like Mario Maker. $30 a year is going to be worth it for a core gaming content perspective. That’s the price of a single game’s season pass these days. I have bought way too much shit for $30 to be phased by that.

As long as it’s easy to setup and purchase, and Nintendo delivers great online experiences (as they have proved they are capable of), the fee will not be a big issue and could provide many benefits to their online infrastructure across the board. Until we hear more details I hope everyone remains positive about it and shares ideas constructively. If the Miiverse is about to be axed, so are the jobs of all the Miiverse moderators. A fun drawing or screenshot could make their day.

5 thoughts on “Nintendo Dollars – Where Are They Going?”