I’m sure you’ve read nothing but positive impressions about the 3DS, but they are all lies. Nintendo 3DS is the biggest scam of all time, lies based on hype, fueled by lack of information and deception on Nintendo’s part. All these websites have been tricked by Nintendo into thinking the 3DS is something it’s not. There’s a very good reason Nintendo has been hiding the 3D screen and not allowing photos, and only letting people play the system for a pitiful amount of time. They are forcing people to fill in the blanks with their own wet dreams, when in actual fact, the system has nothing interesting to offer. It’s nothing more than Nintendo propaganda, and journalists are falling for it left and right. Our sites very own Grubdog even forgot to mention that he attended the event wearing Nintardo fan goggles. They probably had screenshots of OoT taped on the inside. Wow, it’s popping out of the screen! Nintard. I decided to attend an event too, and now i’m here to give people an unbiased look at the new Nintendo. 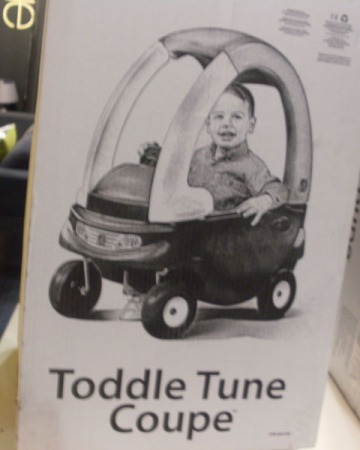 Yes that’s it. Ahaha just kidding. That’s their new home console. I asked a Nintendo rep there when they planned to release this beast, but she just looked at me funny and gave me a chocolate. Nintards don’t have a great track record with humour. I stood in line for half an hour playing PSP and making Wii jokes. Nobody laughed, but I could tell they were all crying inside. After pretending to wet myself however I did get to move up in the line, everyone just kept letting me through. It’s the Mike effect, happens to me a lot. There was a strong smell of Wii in the air, some 12 year old probably wet themselves thinking about the new Nintendogs.

Some idiot with a 3DS strapped to him came up to me and showed me the screen. I said wow, it was pretty amazing. For about 3 seconds. When I looked at it properly, it looked really cheap, like one of those old popup books Mom reads to me. The Nintendogs didn’t look real, they looked like fake toys brought to life, walking around some weird dimension. Even they thought the 3D was crappy because they ran straight towards to screen trying to get out of the 3DS. Is this how Nintendo fans view the world? It would explain how they think Wii graphics are acceptable, ahaha. My eyes felt weird, like my vision had been dumbed down. This is what the Virtual Boy must have been like, the only difference is Nintendo didn’t have the media in their pockets back then.

The graphics were only the start of the disappointment, next up I played some “games”, a generous term to use for these tech demos, but at this point i’m feeling sorry for Nintendo so i’ll let that slide. The most interesting game there was a port of a 12 year old Zelda game, Ocarina of Time. It was exactly the same game, except the graphics had been massacred into gimmicky popup 3D. The graphics were better, it was somehow even more blurry than the N64 game. I could only look at one thing at a time, then the rest would go out of focus. It looked like some kind of horrible fan made graphical filter had been applied. I took out a slingshot and everything tarded out, it started spinning out of control as I moved the 3DS around to try and see the 3D properly. Looked like some kind of glitch, but the Nintendo rep assured me I was aiming the slingshot properly with the motion controls. Good excuse. Annoyed at the lies of the Nintendo drone, I let rip a huge fart. As she covered her nose and looked away, this was my chance to grab a photo of the 3DS screen to show the world what it really looks like.

Kid Icarus is stupid, it’s not even a game. Just another touch and shoot tech demo hidden behind an old franchise. Nintendo has become frighteningly good at hiding shitty games behind mascot characters. The 3D in this game was a mess like Zelda, things just flew everywhere and popped in and out, I couldn’t tell what was going on. It felt like a bad dream, even the wet patch on my pants was still there. I tried pressing the analog stick to move the guy (?) on the screen but it was impossible to do that and aim at the same time. It was far too accurate, give me dual analog any day. The single analog stick on the 3DS felt weird, it was too easy to move around and required a great degree of control. Still, it’s great to see Nintendo at least trying to catch up to Sony in that department.

After that horrible experience I still had a few more minutes to play some other 3DS games, but I was so disgusted I cut my time short and went home. It was a huge disappointment, and that means a lot coming from me, I already knew it would be bad. To all you nintards out there, enjoy the next month of blind hype before the Nintendo 3DS actually comes out and brings those dreams crashing down into a blurry mess. To everyone else, i’d suggest not even bothering to play 3DS, the experience was memorable, but not in a good way. It’s like when you try and flush the toilet but the water just rises and spreads everything all over the floor. 3DS is nothing more than a clogged toilet.

View all posts by Mike