Dragon Quest has gone from being a series I’d never played or cared for, to one of my favourite series in gaming in the space of a year. It all started with the release of Dragon Quest IX; I decided to give it a chance because I love most other RPGs on DS and I wanted to see what the series was all about. IX seemed like the most accessible one yet, and the canvass mode also intrigued me.

I got it, loved it, and played the absolute shit out of it. It has a very simple RPG battle system compared to most – very traditional, but also addictive and fun. The challenge in the game is perfectly balanced, just bordering inbetween too hard and comfortable, a great accomplishment for such a huge game.

The first thing that drew me in was how polished it was, and how inviting the world was. I expected lots of lines of generic text and a soulless, fully customisable RPG. While it’s true that your party never talks in DQIX, the characters you interact with in the game are interesting and inspiring. As the game unfolds you travel through the towns helping people out; this is the basic premise of the game, to get “positive energy” needed to fight bad guys later on, by doing good deeds. You travel the land meeting people, kicking ass, and solving problems. The quests you embark on do a great job of pulling on emotional strings, with immersive music and lively chatter from all sorts of characters. It’s an interesting world: very positive and free of bullshit.

After discovering the wonders of Dragon Quest, I gave Dragon Quest 8 a shot. Holy fucking hell this game is impressive, going from the handheld to the TV screen felt like playing Ocarina of Time for the first time again. The world is technically the same size when you look at both maps, but it feels friggin massive, walking around to some places on the map feels like you might not be able to come back safely. It’s a true adventure in how the game makes you feel. Finding treasure chests in nooks and crannies in the mountains and forests is much more fun in a big 3D world where you can move the camera. That’s not to take anything away from Dragon Quest IX, it has its advantages, too. The handheld game has a much better save system and customisation, and a ridiculous amount of post-game content. While both have their pros and cons, what I love about both of them shares common ground. 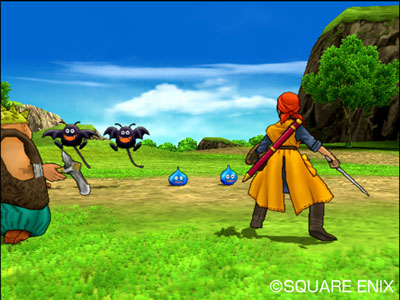 In Dragon Quest, even when you’re a high level, if you venture out too far in the field, you can find yourself in trouble. All you need to do is get careless for a second and forget to heal someone, and the enemy could sneak in a critical hit and wipe out your party. That’s really annoying, but it’s necessary to create the feeling of adventure – a little bit of uncertainty. It puts emphasis on having the right equipment and being prepared for battle. I unfairly placed Dragon Quest into an RPG cliche for a long time, but now I know the best part about it, the feeling of adventure. This is why Dragon Quest succeeds as a videogame, and probably why a new Dragon Quest game still sells millions of copies in Japan on the first day of release.
Here’s the best part about just getting into the series now: even after I’m done with Dragon Quest 9 and 8, there’s a whole damn series out there with 7 full games waiting for me. The next one I’m eying is Dragon Quest 6 on DS, due to 7 being impossible to find. Hopefully they bring that over to 3DS; I’d buy the shit out of it.

Of course, there’s also the huge elephant in the room, Dragon Quest X. This game was announced December 2008… it’s now July 2011 and we still haven’t even seen what it looks like. According to Yuji Horii they are working on the final stages of the game’s development, and it’s been confirmed we’ll see the game in September. The Dragon Quest Collection of 1, 2 and 3 in Japan (another game I’d buy, if we get it) will come with a Dragon Quest X video on the disc; not a bad way to sell something. Dragon Quest X has me pretty excited in the pants for something that doesn’t exist yet, the potential of the franchise on Wii is ENORMOUS. The comfort of the freehand Wii controller alone should make this the best DQ in the series, not to mention the possibilities of online, multiplayer, motion/pointing, and the most exciting thing of all: a new world to explore. Combining the customisation and content of IX with the grand scale of VIII is a good reason to be excited.

Yes, I want Dragon Quest X this much. I’ve become a rabid fanboy of the series and I’ve only played two games so far. In today’s gaming climate of post-apocalyptic RPGs and first-person war simulators, Dragon Quest stands out and shines brightly. I urge everyone to give Dragon Quest a try, IX is the best place to start, but the upcoming Wii version might be even better. For Nintendo fans, the feeling of adventure this game creates is a lot like Zelda. Every town is a breath of fresh air, it’s a nice time period without cell phones and pollution, and the natural beauty of the landscapes is captured wonderfully in these games. Dragon Quest is what true heroes did: they traveled the land on foot and fought off evil with their blade and fist. They slept in a different hotel every night, and impressed women in every town. Life is good, Dragon Quest is good.

2 thoughts on “How I fell in love with Dragon Quest”