I’ve been on a massive Metroid binge lately, playing through the Trilogy again on Wii U with glorious Wiimote controls, then revisiting Super Metroid which I have already written a piece on. Metroid: Zero Mission is a game I’ve had my eye on for a while because it’s the only Metroid I hadn’t played. It came out on the Japanese Virtual Console over a year ago so I thought surely, it can’t be far way. How hard is it to translate a Metroid game? Months passed, and sarcastic tweets were muttered into oblivious PR accounts, as Nintendo missed so many chances to release this game. The game had passed the Australian ratings system gauntlet which is usually the hardest step, but there was just no sign of Nintendo caring about it. Eventually I gave up, and this was the game that made me stop looking at eShop updates. I decided life was too short to live by a release schedule and in retrospect I have to thank Zero Mission for liberating me.

Anyway, the game finally came out and was it worth the wait? Fuck no, but it’s an absolutely fantastic game.

The first thing I noticed was how fast it was. Picking this up one day after playing Super Metroid, it felt like an arcade game. For an exploratory shooter this might seem out of place but it’s certainly not, it feels great and there’s no such thing as a game that controls too well. It’s so easy to perform jumps and shoot around. Rather than seeming “too fast”, it just gives you more confidence in exploring rooms properly. Not that it was ever hard, but there is no clunkiness in this game whatsoever, which is one reason people can’t stand the original Metroid. As I said in my F-Zero GP Legend review earlier this year, GBA games run incredibly well on Wii U. A super clean 60 frames per second puts Zero Mission ahead of recent PS4 remasters.

Another thing I came to appreciate instantly was the graphical style. Instead of just being Metroid in super cool 240×160 HD they’ve added a lot of personality to the game, with a lot of craftsmanship put into the geometry, and a great art style present in backgrounds and short cutscene interludes. Cutscenes? Don’t worry, they only go for 3 seconds or so. In the vein of Other M and Metroid Fusion I was worried this game would try and be too clever and waste my time with text but there’s barely any at all. Zero Mission is a game that never stops to apologise for what it is.

Within the first 20 minutes of gameplay I already had tons of missiles and the abilities were just piling on. The pace is intense from the start and I was struggling to hold everything at once, but rather than an overwhelming frustration I was just thinking “this is fucking awesome” and plowing through room after room. The world is just so open and inviting. The core movement is so strong it’s a joy to fire every shot and jump every gap. The level design reflects this by cramming so many items and tricks into small areas, it’s unbelievable how the world opens up with your abilities. Depending on if you have the screw attack or speed boost there are different ways to enter rooms and navigate terrain; this has always been a Metroid staple but the sheer design in putting so many awesome things close together in this game is something special. There is one negative I will say about this though, because it’s so “well designed” I never got lost. There’s no feeling like in Super Metroid where you’re just wondering around contemplating life in the depths of Maridia. Or Metroid Prime 2 where you fear you will never escape the Dark Aether. Zero Mission is just shamelessly a videogame to collect things and beat, which is mostly a good thing.

The music is the next thing I need to talk about, it’s absolutely outstanding. The original Metroid tunes were always good compositions in my mind, but nothing you could get hyped for. Zero Mission embraces them and takes them to the next level. All the punch of classic NES tunes is there, with added rhythmic layers and the choral ambience from the Metroid Prime games. It all combines to make each area feel extremely identifiable and triumphantly expressive. The music in Kraid’s Lair is probably my favourite in the game, keeping the scary intimidating feeling and just making it feel like you’re meant to be there because you are Samus Aran. The sound effects are really on point too with great tactile feedback and enchanting sounds which would have made the GBA feel like an alien communication device. 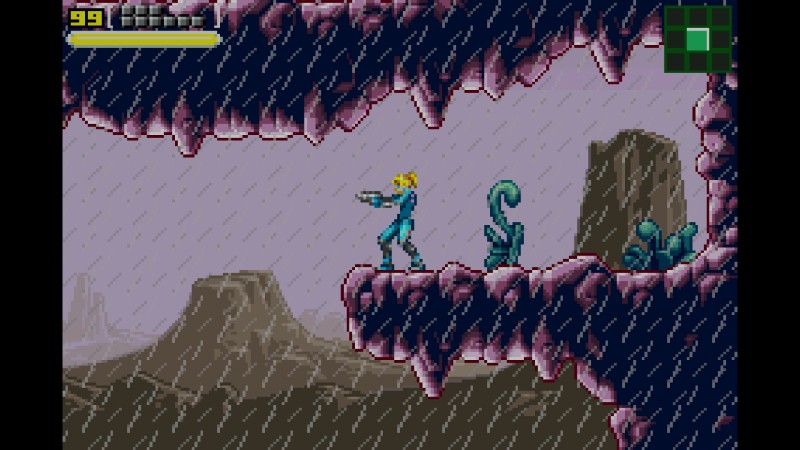 Even though it’s essentially a remake, there is one new area with Zero Suit Samus with some new gameplay ideas. I found the ideas themselves interesting, but I thought the execution of it was poor. The stealth section was not very fun to play and felt very anti-Metroid in terms of design. My problem was figuring out the places you can “hide”, it just boils down to how dumb you think the Space Pirate AI is. Some cliffs they can look up, some they can’t. Anyway, all that is irrelevant once you learn the right path but it’s a frustrating process. The area looks quite nice and Zero Suit Samus is nicely animated I must say, she doesn’t feel out of place and her hair moving back and forth is a pretty cool small detail. I won’t spoil exactly what happens but when you finish the game it definitely makes sense why this area was included.

Overall I had a blast discovering this game, it re-imagined the original Metroid far better than I thought possible, and it’s the best controlling Metroid I have played. That says a lot because they all control fantastic. The core gameplay engine feels like it would have been a fantastic benchmark for dozens more 2D Metroid games to come, but unfortunately they just stopped. Looking at the “new” section, I’m not sure this team had the ability or inspiration to create a new game anyway, but it would have been nice to see more games take the approach of Metroid Fusion with these gameplay enhancements. Can anyone save 2D Metroid? I don’t know, but at least we have plenty of great games to play as it stands. Thanks to this game finally hitting the VC in Europe and Australia (and hopefully America soon) every single Metroid game is now available on 3DS and Wii U. It’s a great time to be a Metroid fan if you just forget it’s 2015. Thankfully the games are so good, time is very easy to forget. Zero Mission is no exception, an absolute quality Metroid game everyone with a Wii U should play.

6 thoughts on “Metroid: Zero Mission – The Last 2D Metroid Is In Captivity”