Right, so. Nintendo had it’s big Switch reveal, and most of the Pietriots, myself included, were there to watch it. So while everyone is busy trying to downplay the positive reception to the reveal (ie selfish YouTubers, Game Jounalists, and those scared of motion controls still), I decided to list some of my favorite moments from the reveal. Let’s get going, shall we?

YOSHIAKI KOIZUMI IS A MAGICIAN 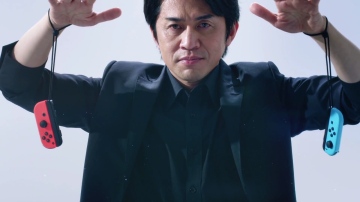 I did not know Koizumi was the main producer of the Switch console, but being the lead presenter at the Switch event, he worked it and he delivered in spades. From showing off the Joy-Cons themselves to revealing games, I want this man to be presenting Nintendo Directs for 2017.

Many of you might remember Miyamoto showing off Project Giant Robo at E3 2014, along with Project Guard, which later became Star Fox Guard. We haven’t heard about the game for over two years, but those who know Nintendo’s history know that game ideas that fall by the wayside tend to get picked up again and used for different things. After all, Splatoon was originally designed to be a Mario shooter game before it morphed into Splatoon.

That is what I think ARMS became; it was Giant Robo, then turned into this. The beginning of the trailer is actually my favorite part. Muscular Caucasian guy vs. Japanese school girl and they grow spring arms. This kind of bizarreness shows Nintendo is not afraid of being different and crazy. Also, ARMS looks like a more expanded upon Wii Sports boxing and that is definitely not a bad thing. 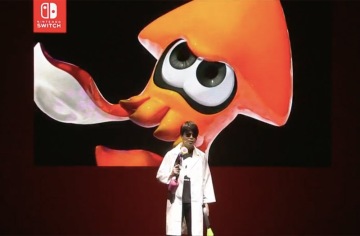 Rumors abound (hi Emily Rogers, Laura Kate Dale and Tamaki!) that Splatoon was supposedly going to get a Switch port with new things. If you remember our new edition to the yearly Pie Radio podcast, we all suspected this would happen. Well, we were proven wrong in the best way possible; we all knew Splatoon was getting a sequel considering how much of a splash it made, but we didn’t think we would get one so soon since Splatoon launched back in May 2015.

Anyway, what stole the part was Splatoon 2’s producer dressed in a scientist get-up and doing weird posing. It makes me so happy Nintendo’s staff is keeping Iwata’s legacy of doing funny things in Directs alive!

It should’ve been obvious that the event was being interpreted live on the Stream, but where most people would find something like this, being Nintendo releated, as an outrage (maybe?) our imaginations thought differently. Suda is known to be a crazy, outrageous guy, and when he revealed No More Heroes 3, he kept talking in Japanese and nobody knew what the hell he was saying. His actual speech has been translated on the net, from what I hear, but it was funny to pretend what he was really saying.

BILL, WE UNDERSTAND YOUR PAIN

No good picture on the internet with these two together. Thanks Google Image search…

So. Nobody knew why EA was invited; considering the hell EA put Nintendo through with the WiiU’s beginning years (UNPRECEDENTED SUPPORT HUR HUR), the bridge should’ve been burned all over the place. But Whoever-The-Fuck-He-Is EA guy decided to speak to the audience of people with our lovable NoA Treehouse Exec Bill Trinen translating from English to Japanese. We could all tell Bill didn’t want to do this, because the face he was making was “shit, get me away from this guy.”

I heard the EA stench is hard to get out. Requires two weeks worth of lemon juice to get out.

So there, those were my favorite moments. If you want, share yours in the comments. We won’t mind.