You’ve lost yourself. Material objects lay scattered under a decorated tree, endless plates of food are spread across a table, but the holiday spirit has drained the life out of you. There’s no reason for any of this when you just want to lie down. You open the eShop in a desperate search for salvation, but it paralyses you further. So many meaningless titles. Pages and pages of sales. Now you are falling perpetually with no landing in sight, as the bottom of the screen never fills. Suddenly one name stands out, GRIS? The gameplay is a bit unclear but it’s a game about loss with some very high quality art. This might just do it. This might fill the emptiness within your soul.

Nope, no game will ever do that. However GRIS does take you on a personal journey. It is a 2D platformer with a very minimalist approach to all aspects of its design; sound, visuals and gameplay. The further you get, the more elements you can combine and the game mechanics start to have more depth, the graphics have more colour, the music becomes more central. This game starts off deceptively simple and builds on itself by slowly adding new forms of interaction.

The game is relatively short and easy but that’s not really the point of it. A lot of times you’ll be thinking about what to do or where to go, or why you need to go anywhere. What even is this game? Who is this girl? It asks you questions without saying a word. I will criticise a lot of these artsy Indie games for having bad gameplay, but GRIS actually has great character movement. The girl animates vibrantly and there’s a lot of effort put into the weight and feedback of the controls. Moving and jumping is super responsive with elegant visuals to accompany your inputs. The game also has very highly polished animations and sound effects, and it’s just enjoyable to play. The puzzles have some nice design and still give some satisfaction without too much difficulty. 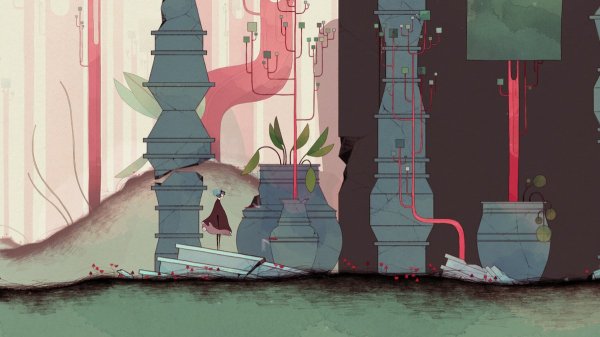 One of your abilities turns you into a rock, and you can use it withstand harsh wind. It’s a slow but reliable anchor for those timed challenges in life, like recovering from an illness or getting through a social event. As long as you keep going you’ll get through it. You can also smash pots with it which has no purpose but just feels nice. There’s also an additional jump granted by butterflies that makes them feel like uplifting little helpers. They remind me of my friends who always elevate me. The rest of the gameplay mechanics I will purposefully not talk about because I found them a nice surprise. It never gets complex but there’s enough to keep it interesting.

Some games that tackle “deep” topics like to throw pages of text or conversations at you and it can be exhausting if you’re not in the mood. GRIS is the opposite of that and is a very stress-free game in all aspects.  There are games that deliver an entire book’s worth of lore and backstory, and I love that sometimes. GRIS however is straight to the point, and more like the picture book equivalent of a videogame. It does a great job at what it set out to do.

I did have a couple of gripes though. There are some “cinematic” parts that give you the illusion of control, but what you do doesn’t actually matter. I honestly wouldn’t have minded dying and restarting, as that can give a situation more importance than a scripted scene. There’s not too much of this though, and the gameplay is largely uninterrupted. Another gripe is that it’s not so clear how to 100% the game (which gives you a special cutscene). I found that a little too obtuse, because this cutscene is fairly important to understanding the game’s story. To get it you need to get every “collectible” which are white dots you find lying around. I still don’t really know what they are. I also wish the game was a bit longer and they made more music. The music that’s there is absolutely stunning but there’s not much of it. I beat the game in about 5 hours at a fairly relaxed pace.

GRIS is not really the best at anything it does, but it’s more than the sum of its parts. It never tries to sell itself, it simply is what it is. I would not put it on a Game of the Year list but it’s definitely worth a play if you want something different. You’ll see creatures that don’t try to kill you. Objects without colour. Structures with no purpose but to make you look at them. It sorta exists against the expectations for a platforming game and gave me a lot of moments where I was truly engaged in a calm thoughtful way instead of being focused on enemies and hazards. It’s refreshing for a game to discard that feeling entirely. This loops back to the theme of loss the game tackles. It gives you the mindset of rebuilding through its gameplay progression as you find more abilities and things start to look better. Imagine if being happy was as simple as holding right and jumping occasionally. You wouldn’t know it because you can’t actually see what’s in front until the screen scrolls. If you’re not interested in the themes then it’s still an entertaining game in its own right. It wont change the world but it will give you something to do. Sometimes that’s all you need.

One thought on “GRIS – Comfortable Discomfort”