The sky above is clear but there are clouds in the distance. You can tell it’s about to rain. Luckily, you are a Splat Brella main. Lift it up and catch the wind. If it flies back in your face then a storm is coming. You must charge up your own rain to counter it by inking everything around you. Throw that sprinkler down. Launch that canopy across the bridge. Jump around and shoot ink all around the camp yelling Booyah! People will give you weird looks but to use a Brella effectively you must be prepared to take in your surroundings. 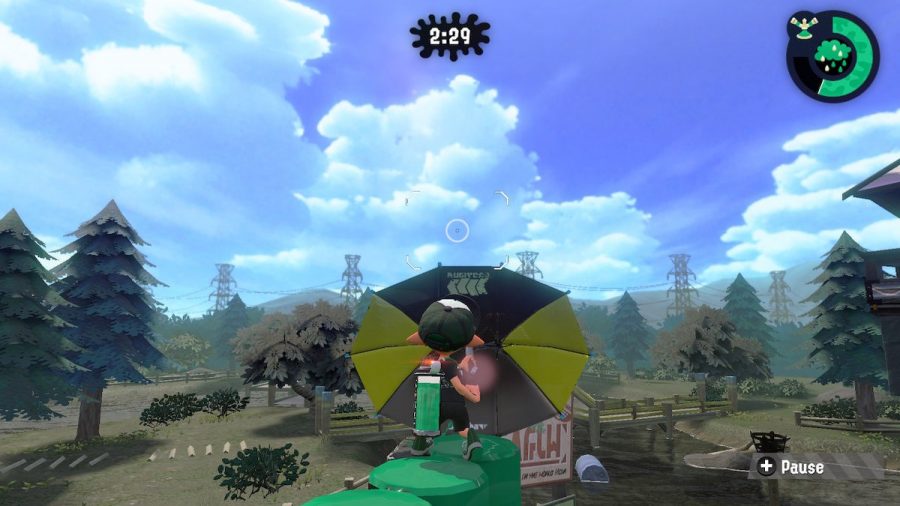 Fighting with the Splat Brella is not about being aggro in general but being aggro in your mind about which fights to hunt down. You don’t wanna be surrounded with any weapon, but with Splat Brella you’ll just crumble and not even get your own shot off. Positioning is more important than ever. Some fights you aren’t gonna win but you can create your own advantage. Sometimes you can pair up with a friend and shield while they slay.

Opening your magnificent canopy can draw lots of attention as they marvel at the material and craftsmanship of this modern weapon. The Hero Brella is even better for this pairing strategy with it’s yellow and black display of might. Everyone can see it and that’s exactly what you want. When baiting with the Splat Brella I think it works best with a fast killing teammate like a Dualies, Blaster or Roller to very quickly take advantage of enemies who approach the brella. You can’t give them any time to understand what’s happening. As soon as they see the second weapon they are gonna run. Other chip damage weapons can work if you both get your shots in but in general you want a one-shot to keep your own shield up. A charger in back is also going to have a feast when you draw people out.

Sometimes it’s not all rosy and you don’t have teammates up, or in the same place. Sometimes the enemy has all long range weapons and won’t fall into a good spot for you. Sometimes you will all get separated by missiles, chased by an Ultra Stamp, or just run out of ink and bail. Sometimes your teammates just don’t know the purpose of the Brella in solo queue and will leave you to die while you shield and hope something will happen.

You can wait for your untimely death or you can slay. Slaying works with the Splat Brella if you hunt down 1 on 1 fights, because that’s where it has the advantage. You gotta flank, slay, pick and destroy. Then not miss a shot. Then shield perfectly. Then hope the shield works. Then run out of ink. Then die with a Booyah. 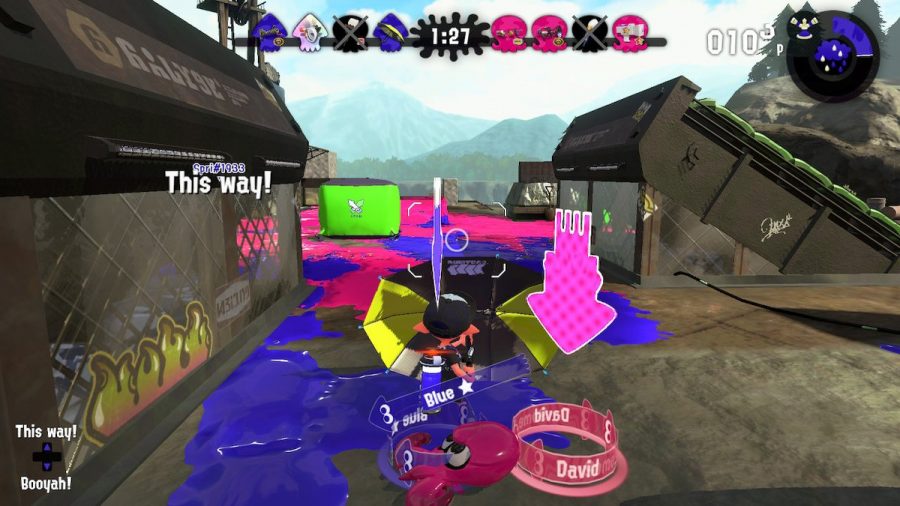 Brella can protect teammates jumps but you need to be very careful when camping the other teams jumps. They won’t die in one shot but you can land that direct then walk into them to finish them off with a shield hug. Usually they can scamper away so a little sprinkler next to their jump point can help slow them down and get that extra little damage you might need. The best way, if possible is just to shield a superjump and not even attack. If a teammate is around then can pop them off safely now.

Make sure to clean your brella after every rotation. A buildup of salt, kelp, ability drinks or sea snails can slow you down faster than you can say Booyah. You can’t have any doubt as a Splat Brella main. I recommend a soft cloth with some orange ink. Then finish up and wash the ink off by falling into the water at Camp Triggerfish or Manta Maria. There are plenty of places on these stages to enjoy the clear water but I recommend the side parts near spawn for the cleanest water, away from any battle residue. Use recon mode so you don’t have to worry about any bombs, ink, missiles or corpses in the water. Take some Quick Respawn gear with you for a slightly less painful death when you clean your Brella. Or just enjoy the pain, because there’s a lot more coming.

The best gear in battle is personal preference but the Splat Brella makes good use of Ink Saver Main for support play and Run Speed for aggro play. You’re gonna be shooting a lot if you want to set the stage for a good battle. The Brella inks your feet as you move, but you’re gonna mostly want to have your sides inked so your enemy can’t move there and shoot you from the side or back. Inking mainly helps keep them in front of you for an easy fight. It’s also helps keep your shield up longer. Run Speed is good so you can finish someone off with a second shot and they won’t get away if you’re the same speed. Without it I find that people can get away from you very easily while you’re planted in the ground. It’s also very nice on grates and for getting yourself into a good position beforehand. Object Shredder will make you a Baller shredding machine as well, but even without it you can block them.

Now for the most important part of the Splat Brella, protecting. You don’t play this weapon for yourself, you play it for the team. You can hold it up while teammates shoot the other team from cover. Just watch out for bombs exploding immediately on your canopy, they can kill any teammate who is standing in front. You can also protect superjump points if they don’t have stealth jump or things are dangerous. In this case it’s usually worth dying because their weapon is probably better than yours in a chaotic field. The Brella is also very good at objective pushing and you should always ride Tower with it when possible, with your best friend the sprinkler riding shotgun for extra turf and protection. The Splat Brella also pops the Rainmaker shield very fast if the other team doesn’t have lots of bombs.

There’s an objective playing use for Splat Brella in every single mode. You can protect people riding the Tower, protect the Rainmaker carrier, protect people throwing clams, and shield enemy ink away from the zone. This is not gonna give you a good kill / death ratio but it’s the kind of play that wins games when you get those few extra clams in. With a Splat Brella you’re in it for the Booyahs that come from a great team play. Booyah can help build trust and more people will join you in combat for maximum attack and protect. If someone doubts the Splat Brella in your team then it’s going to be a very rough game and the prophecy will fulfill itself and they leave you to die and wonder why all the fights are so hard. Ouch! Ouch! This Way! Ouch! Believe in the Brella and your Ouch! will turn into Booyah!

Life with the Splat Brella has very big highs but just as many lows and lots of suffering. It is recommended only for people who enjoy the weapon, as its main strength is fun and flexibility. You have to enjoy the little things, like the satisfying shotgun crunch sound when you land a shot. The plays and opportunities that open up when you launch the majestic canopy across the stage. The multiple tower riding tools it provides. Launching it to throw that last clam. The feeling of pride and relief when you save a teammate’s life. Life with the Splat Brella isn’t so bad, at the end of the day.

I love Splatoon, my friends, and my Splat Brella.

One thought on “Life with the Splat Brella”