A convoluted development and Reggie hating it was enough to turn most people away from Disaster: Day of Crisis. Hopefully in Valhalla, Moses will forgive these people and allow them the opportunity to enjoy this game in the afterlife.

You play as some guy. I can’t remember his name because he’s your generic all-American hero. You know the drill: high school football star, ex-Marine, closet homosexual. There’s one word that really describes him properly: dominator. This guy just dominates wherever he goes. Volcano exploding? He’ll just dominate that and run through fire. Special Forces holding hostages and a SWAT team getting shot to pieces? He’ll dominate that by running in in his tank top and hand gun. He gets involved in the story because his dead boyfriend’s sister was captured, she works as the secretary to a real man’s job – a seismologist – and as her only tenuous connection to the past the cops thought to bring him aboard in a giant scheme involving nuclear weapons and man-induced disasters. 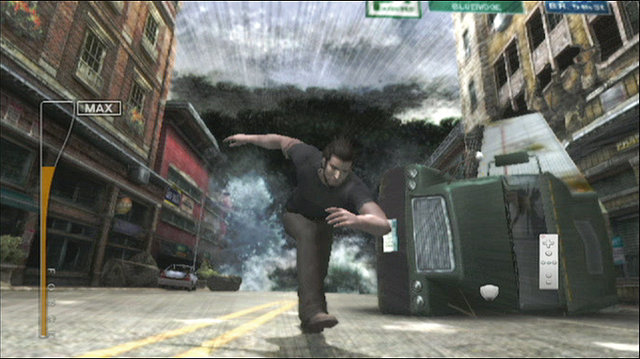 The shit starts to hit the fan pretty quickly and you gotta bust into a building, rescue everyone, and shoot all the baddies. When you’re halfway through this the first of the disasters hit and then it’s every man for himself. Rescuing losers earns you points of some variety, shooting dudes in the face wins you points of another variety. These points can be spent between levels to upgrade your abilities and stats. One of these abilities is strength and lots of strength allows you to just bust arse, stomping on any box or crate in the vicinity. Stomping these weaker objects often reveals more skill points or massive oversized hamburgers which you must then consume with gusto.

It’s probably worth pointing out that all the combat is entirely separate from all the busting garbage bins slash rescuing weaker humans. When a combat situation arises, you know about it because there will be a second long cutscene to hide the loading, the screen will blur and our hero says something positive like “shit.” It’s almost a shame really, because before you work out the pattern of wander-around-busting-arse and then enter combat then wander around some more, the game’s atmosphere provides a real sense of dread and danger. After the first few levels you’ll realise that in fact you’re in no danger at all, even when you can hold C to see a building collapsing in front of you. So now that I’ve cleared this up, let’s break down each section.

Combat is good. The game takes place in first person and feels like a light gun game. It is however a bit odd and unlike any light gun game you’ve ever played. For a start all the enemies can take a bullet to the face like a champion. Shooting them in the head does do more damage, but often not enough to kill them. you can add more power to bullets, enough to be fatal by ‘focusing.’ Focusing zooms the camera in and the sheer will power of the shot allows you to dominate foes. At the start of the game you really only have enough concentration to focus for a second at a time but over the course of the game you can build this up. Also unlike a light gun game, enemies won’t just be complacent enough to shoot endlessly while you hide like a coward to reload. They’ll change position, move up and punch you in the dick. Reinforcements will be called too, some armed with RPGs. Don’t worry though because if you thought enemies that can take a shot to the brain and carry on living were mean, our hero can be run over by armoured vehicles, take an explosion to the balls and still fight on. He’s just that cool. Also sometimes while you move between cover, an automated action, you can bust out random shots at enemies like Virtua Cop. These shots are almost always fatal and at the end of the stage you’ll be awarded titles like “Full fist legend,” “Unstoppable dominator,” or something else along those lines for these heroic shots of justice. 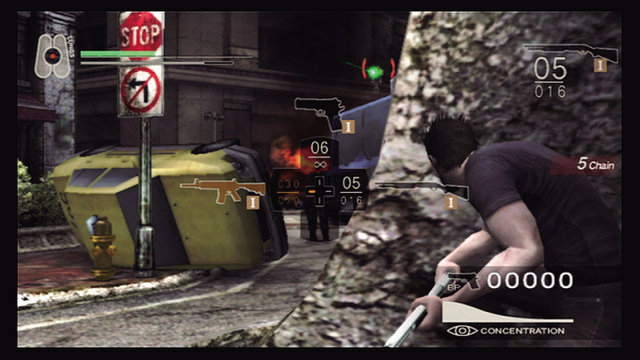 The other half of the game is spent staggering around the city finding people to rescue and crates and shit to break. The rescues are all pretty straightforward and nearly always utilise the motion controls. The controls are accurate enough to fend off annoyance while the rescues are varied enough to prevent boredom. Occasionally these rescues highlight touching stories like the father who was separated from his son or the emo girl with no friends. The names of all the people you rescue are recorded in the game statistics. You can also beat the shit outta random objects, which I’ve already mentioned and promise not to again. What I will mention though is that the camera is a piece of shit, zoomed way too far in and never doing anything useful.

Every now and then the game chucks you in a random car. The car scenes are all pretty cool with explosions, high speed chases and great crashes. The steering is all controlled via a Nunchuk-free Wiimote and for the most part it feels pretty solid. If you crash that’s because you suck and need to stop playing Mario Kart with it’s pussyfied joystick control option. Put your controller in a wheel cradle to drive like the champions.

The game looks like what we’ve come to expect of decent Wii games, lacking in polish and not dissimilar to GameCube graphics but with a few spectacular moments. The music is all pretty standard, as are sound effects. The game features a fair amount of voice and all the no name actors did their best B grade performances which is really great to see. Thankfully, none of generic dominator’s swearing was censored which helped remove some of the cheesiness.

Disaster: Day of Crisis is a great game. The story, characters, and setting are a write-off but all that shit is bullshit anyway as the gameplay demands to be taken seriously. I barely gave controls a mention in the review because they’re good enough to not be noticeable; the motion controls all enhance the game and work well. With its original ideas, solid gameplay and decent presentation, Disaster: Day of Crisis is great purchase for any self-respecting Wii owners and a game that Nintendo of America ought to be proud of.

One thought on “Disaster: Day of Crisis”