Hi everyone! What’s the next activity on the schedule? Schedule? Screw that! There is none, we’re on HOLIDAY! I just don’t feel like doing anything. So far we’ve already wet ourselves, gone skateboarding and sniffed some petrol. It’s time for a break. In this article, I’m going to introduce you to the game outside the games, in the game system. Go Vacation features 4 different resorts to roam around in: Marine, City, Mountain, and Snow, all with their own style and appropriately themed activities. The resorts are how you find each mini-game – walk around and you’ll see icons above peoples heads, inviting you to activities. However, there’s much more here than a simple hub for the games: the resorts are vast and contain many nice views and secrets.

Your character controls like any standard third person adventure game: simple analog stick movements to walk around and B to jump. It’s not exactly Mario levels of interaction, but movement is smooth and polished and the animation is consistent. Running is pretty slow however, and if you tried to run around an entire resort on foot it would take forever, so thankfully there’s different forms of transport lying around. If there’s water, you can bet there’s either a kayak or jet-ski nearby. On land, there’s either a motor vehicle, skateboard, or snowboard to speed things up, or even a horse. The game does well to make the transport always accessible; you can teleport to key areas of the map (Xenoblade style) and pick any vehicle you want from a quick menu. Namco has made sure there will be NO discomfort on this vacation!


The Mountain Resort is basically Zelda, it’s the biggest resort in the game, and features a lake, rivers, a train line, waterfalls, mountains, a castle, a ranch, and lots of winding dirt roads. It’s ridiculously vast and a beautiful place worth getting lost in. There’s secrets hidden all around the resort, but the most rewarding aspect of exploring the Mountain Resort is simply the great views. Strolling up to a cliff on horseback creates feelings of awe and adventure comparable to Ocarina of Time, no joke.

For a moment, it seems like things can’t really get better, standing on top of a mountain on your horse. King of the fucking world. ACHIEVEMENT UNLOCKED – STOOD THERE LIKE A DICKHEAD. Just kidding, the game doesn’t do that. Anyway, what’s next? Now’s a perfect opportunity to get off the horse and kayak back down towards the lake! All the way down the mountain through the rivers, going through caves and down waterfalls, passing fellow kayakers along the way. Holy shit, it feels like an adventure. Where are we going? Who cares, let’s just see what lies around that corner.

The engaging part of free roaming is fueled by curiosity and nothing more; as a result, this experience isn’t for everyone. Some gamers will be perplexed and say “there’s nothing to do…” while cycling through the mini-games on the main menu, ticking every box as fast as they can. Of course, there’s nothing wrong with that, and you don’t need to explore the resorts. For me, I love game experiences like this. Walking around the resorts feels like I’m appreciating all the work put into this game, and finding satisfaction on my own terms. It feels like something I’d actually do in real life if I was at a holiday resort; I wouldn’t have a checklist of activities to do, I’d just want to walk around the place and find cool spots to hang out.

Here’s the twist – everyone on the island is dead. The game gives you the illusion of company, as other people will walk/drive/kayak around the resorts with you, on their own paths and own mission, but this veil is quickly lifted when you try and interact with somebody. The best you can get out of them is a wave, or a grumpy face if you try and run them over. They spout off generic lines like “the air is so crisp”, “oh man!” and “wanna go camping?” completely out of the blue. I’m pretty sure they’re all zombies – the only human left is you, and potentially 3 other players. It would explain why the world in Go Vacation is so beautiful, with no people to stuff it all up. There’s also ghosts in the snow resort who appear out of thin air at the top of the mountain, ski down to the bottom, then teleport back to the top. It’s like something out of Cursed Mountain.

Some of the more advanced zombies will speak a full sentence of text as they introduce you to each activity, and while the world is mostly dull there are a few good characters scattered through the resorts. My favourite is an old guy who stands outside a building he developed, and talks proudly about how he made it and it’s his life work. The people with speech bubbles above their heads tell you random things about the island, it’s history, and hints about secret stuff like treasure chests and secret jumps. Nothing too exciting. Some characters you can actually invite to explore the island with you, and they jump around and glitch into walls as they attempt to follow you and eat your brains. The awkwardness brings back feelings from my Resident Evil 5 single player experience, except these guys don’t waste your ammo.

The populated resorts might hint that there’s an Animal Crossing type experience here, but it’s not like that at all – the characters are lifeless and events are non-existent. It’s probably my biggest disappointment of the game so far, but Go Vacation is such an ambitious game that there was bound to be sacrifices, and it only gives them more things to expand upon in the future. The game is clearly designed with families in mind, and split screen with 4 people is pretty damn cool if you can get enough people interested to pull it off (I can’t). There’s no online play, but multiplayer lets 4 people walk around the island at their own pace, going wherever they want. The whole concept of one player kayaking down the river, while another rides an ATV over a bridge is pretty damn awesome. I think they have all the fundamentals in place here for the best online gaming experience ever. 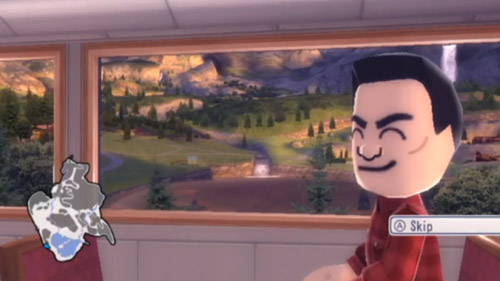 Go Vacation is all about you. The fun is found in exploring, going down new paths, and just finding cool spots to look at the scenery. I’ve ridden the train a few times and just sat there using the side window view. This was my “break” from the game, and I was still playing it, despite putting the controller down. While my head was thinking about what happened at work today, I was staring at the screen noticing new things in the resort outside the train window. Sometimes I leave the train going when I walk out of the room. I know – it’s risky with all the zombies roaming the resort ready to attack the train at any moment, but I like living on the edge. Life’s too short to press pause on a train ride. You can also take helicopter rides and boat rides to do the same thing, but I personally find the train the most relaxing, which is the whole purpose of these rides.

If you think you’ve been everywhere, there’s 7 treasure chests in each resort, different bungie jumping spots, and unique photo spots to find at different times of day. The treasure chests are hidden extremely well; I’ve spent a long time in the resorts and there’s still a few I can’t find for the life of me, I could swear I’ve been everywhere but apparently not. On top of that there’s achievements for things like insane jumps and falling off cliffs.

What an awesome day, we did nothing, yet we did everything! Free roaming is nothing new in games, but it’s what sets Go Vacation apart from other mini-game collections. It turns the disposable party genre into an imaginary world, and with the effort Namco has put into this game, it’s definitely one worth exploring.