Welcome BACK! Free Roaming time is over – it’s time to get into some more activities! Go Vacation supports a shitload of control options through its wealth of games, including Wiimote, Wiimote + Nunchuck, Balance Board, MotionPlus, Wii Wheel and the Zapper. Today we’re going to get out our fancy new controller to play some MotionPlus games.

Windsurfing is the first game I’m going to talk about, because it really took me by surprise. Expecting a passable point A to point B race, I got a creative use of Wii controls I’ve never seen before. No buttons are used in this, and there are two things you control. The first is the sail’s angle, and the second is the direction of the boat. These are BOTH controlled, simultaneously, with the Wii Remote.


Here it is in action. I’m doing two things here, firstly I’m making sure the sail is facing in the (constantly changing) direction of the wind. When the arrow is green, it means the sail is angled properly towards the wind to gain the most speed. The Wii Remote is held with the buttons facing upwards, and the sail is controlled by keeping it steady, and sliding the back of the controller left and right. The sail doesn’t change the direction of the boat, it’s only used to pick up speed. Now, in addition to moving the angle of the sails, I’ve still got to turn the boat itself. This is done by tilting the back of the Wii Remote up and down. It’s confusing at first due to just how much control you have over the sailboat, but this makes it very satisfying when it clicks. It doesn’t take long either; the controls are smooth and reliable and anyone can do it once the concept is understood. It’s a genuine Wii game that’s only possible with MotionPlus’s ability to detect both the angular change of the sail, and the direction change of the boat at the same time – WITHOUT tarding-out. It’s a new concept that feels wonderful.

Unfortunately, the game’s content is really limited: 5 levels seems like a crime for such a great control method, and they are barely challenging at all. The races are a bit of a joke, the AI just falls apart after 30 seconds, and in slalom mode the gates are very easy to get between – it’s almost a straight line. This is a real shame, because once you get the hang of the controls, it feels like you’re a windsurfing god, ready to take on a vast ocean and weather storms like Link in The Wind Waker. Instead, your skills are limited to the kiddy pool. Nevertheless, it’s fun to play, and it’s always nice to get a feel for a new control method. I think it’s good enough to make a full game out of; throw in some big waves, challenging courses, and radical wind changes and this would be an amazing package. For now though, the only motivation to keep playing is multiplayer, or beating your own times. 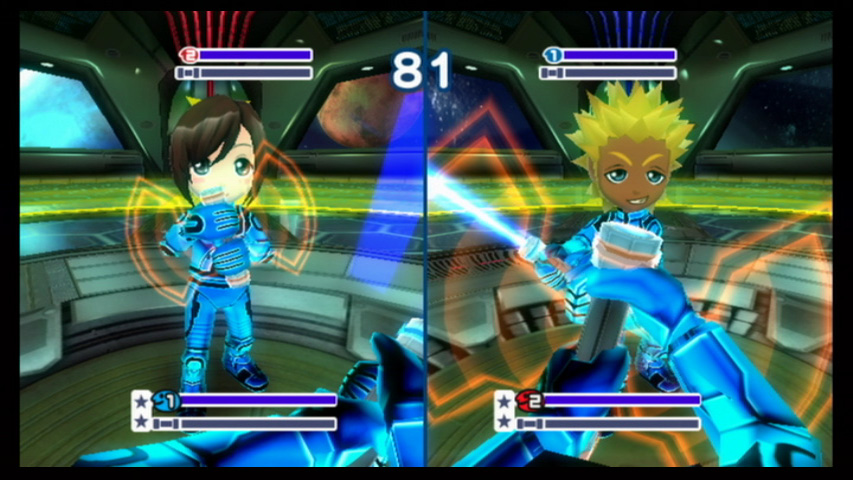 Sword Fighting is remarkably similar to the game in Wii Sports Resort, except you fight in robot suits. The scenario has your Mii’s placed in a bubble and taken into a virtual world with lightsabers and futuristic sound effects. The concept remains the same: you’ve got to push your opponent outside the ring; but there’s also a health bar. So if you can’t win by brute force, you can still take a victory with enough hits. Successful hits and blocks will charge up your special meter, allowing you to do a power swing with A when fully charged. The controls are responsive and accurate and the sword will go exactly where you want without any glitching or teleporting; it’s nice to see that Nintendo isn’t the only developer who can pull this off. Apart from swinging, you can hold B to block. Blocking produces a visual barrier with a small opening that shows exactly where you can be hit, and you can rotate it with the Wii remote. Sword Fighting doesn’t go beyond simple one-on-one battles, but it’s still fun while it lasts thanks to the satisfying controls. The fast flowing nature of the battles wouldn’t be possible without MotionPlus, and it’s a great addition to Go Vacation.

Ace Pitcher is the final MotionPlus game in Go Vacation. It’s functional but not too exciting to play, and doesn’t use MotionPlus to its full potential. The goal is to throw a baseball at panels with numbers on them. Instead of a smooth interactive throw, you go through several stages of setting up your aim. First, select a number panel to be the central aiming point. Secondly you lift the controller up and press B. While holding B, you can tilt the controller to aim, and then swing to throw. Throw distance is dictated by how far down you swing the controller: if a panel is high up it needs a deep swing, and a short swing will hit the panels down below. The challenge lies in keeping the aim straight while you swing down – this is where MotionPlus comes in by being able to detect both movements at once.

It’s not a bad game, just not very involving and has no addictive qualities whatsoever. The simple usage of MotionPlus could have complimented it nicely if the game itself was more fleshed out. Idle panels with numbers on them gets boring pretty quickly, especially considering how easy it is. The accuracy of MotionPlus is used, but not needed by the games design. Some moving targets or different stages would have made a big difference.

Tennis uses MotionPlus, but it doesn’t add much, and the game is playable without it. All MotionPlus does is let you add spin on the ball, and it’s very basic. Rather than give you control over how much spin to apply, it’s always a set amount, and it only registers which type of spin it is, rather than the exact angle. The game is primarily about movement, using the analog stick, and swinging at the right time. It’s still pretty fun, but not relevant to today’s activities.

Alright, that’s it for today! MotionPlus certainly isn’t required to enjoy Go Vacation, with only 4 games that use it, but it’s a nice touch and brings some new ideas to the table. Supporting so many different controllers really highlights how much the developers care about providing the best experience they can, it’s all the little things that make Go Vacation such a great game. The three exclusive MotionPlus games are the only games without achievements (silver keys), which means you can still 100% clear the game if you don’t have the accessory. It’s an unusually nice thing of Namco to do, especially considering some of the ridiculous achievements required in some games today, like “beat the developers in an online game”. Unattainable crap like that is why people give up trying to complete their games; it destroys motivation. Go Vacation doesn’t force you to do anything you don’t want to, and you aren’t punished for not having every accessory in the world. The MotionPlus games are actually quite hard to find around the resorts, since the mission structure of the game never takes you there directly. It’s refreshing to see content presented this way. There are so few good MotionPlus games out there on Wii, that Windsurfing alone might make a vacation on Kawawii Island worth your while.