I’m here to play games and chew bubblegum, and I’m all out of retro-themed non-linear FPS games. Oh wait, just found one. Hold the bubblegum! I’ve got some GAMING to do.

Project Warlock immediately impresses with a crunchy badass guitar riff, with tons of options on the main menu to make you feel like you’re about to order an explosive meal at the Mayhem Diner. The gameplay feels right at home with other 90s FPS games like Doom or Duke Nukem 3D, but the graphics take some getting used to. Unlike other FPS that imitate this style in actual retro engines (like Ion Fury in Build), this game is made in the more modern engine Unity. It has a cel-shaded outline with more of a Minecraft or Dragon Quest feel. It took me a while to get used to, but it runs well and allows for some impressive lighting effects and colours that really pop like candy. Candy popcorn. Bubblegum you can swallow.

KABEWMM! The difficulty makes itself known quite fast. You thought you could just WALK IN HERE, with your candy popcorn, and nobody would ask any questions? Well, you’re right. They didn’t ask, they just tried to kill you. This ain’t no corridor movie-isle shooter.

The first few levels in the game are actually the hardest, by some design anomaly. It took me about 10 deaths on the easiest difficult to even get through them. This game doesn’t have autosave or quicksave, so you have to beat the levels in one go and there are waves of enemies that can overwhelm you. It can feel like a slog, but it also makes you appreciate the level design more and take every enemy seriously. So why are the first levels the hardest? The game has an upgrade system that is so good, it almost breaks it. Upgrading your health a bit and unlocking the health regen ability makes every level from then on a cakewalk.

The game features a ton of weapons, upgrades and perks, but most of them are useless. The good ones, are very overpowered as a result. My favourite was the Minigun Turret, which you can drop on the ground like the Laptop Gun in Perfect Dark. Good memories. 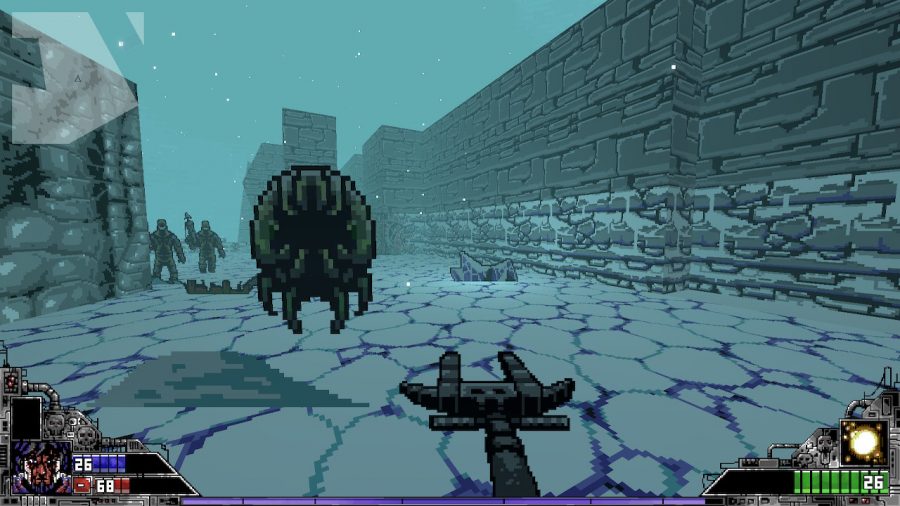 What game is this again, Metroid Prime 4?

The aesthetic changes with each world, but the gameplay loop starts to drag a bit. While Project Warlock has very solid and satisfying core gameplay, the flat environments don’t really offer enough texture and detail. Like when bubblegum loses its flavour and starts to taste like glue. To its credit, it does try to mix things up with lots of exploratory gameplay. Switches and door keys are often cleverly placed, with secrets to find as well by blowing up walls or humping every wall and mashing the A button. Don’t look at me like that, it’s a gamer habit.

The non-linear exploratory game design is its biggest strength, but soon enough every level starts to feel the same and you’re just going in circles. 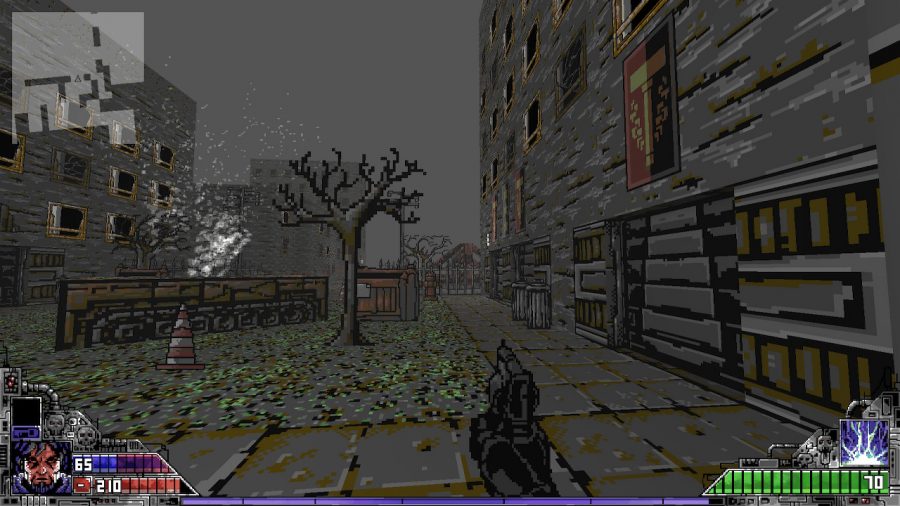 It’s the graphics and lack of real direction that makes the game feel a bit repetitive. There really is not much detail at all in the textures and environments. Bins, crates, bookshelves, chairs and random mundane things are scattered around, but nothing that really tells a story or inspires any kind of imagination. The writing is all told in a single screen text narrative between chapters, and not too exciting either. You’re a good person killing the bad persons.

One interesting thing is that some enemies have their own unique hitboxes, for example ones that hold up shields that block your shots, or enemies with multiple evolving forms. Sounds simple, but this is rare and quite impressive for a sprite based enemy to have quirks like that. There’s also some spectacular boss fights with multiple phases that provide engaging setpieces.

Overall Project Warlock is a very competent, if uninspired first-person shooter. Considering the small team, I found it impressive and enjoyed my time with it regardless. It runs very smoothly and solid with no technical problems at all, even in crazy boss fights with hundreds of enemies spawning. Switch owners will lament the lack of gyro controls, but apart from that the controls are great. As of this writeup’s publication, it’s currently on sale on the eShop for roughly $13au and good value. You can also watch the VOD of my stream here, with 2 hours of gameplay. Now if you’ll excuse me, I have to smash this suspicious looking wall in my house.

Booyah! I knew my car keys had to be somewhere.