Good lord, I’m having déjà vu yet again! Three months into the life of the WiiU, we’re already seeing the cycle repeat itself as it did with the 3DS; sales start to stall, and third parties are no where to be seen. According to the NDP, WiiU versions of games are selling worse then the Vita! (…Vita still counts?) Nintendo didn’t do enough to advertise the WiiU and court third parties! WiiU is now doomed!

Nintendo isn’t to blame for this current mess. The people who are to blame are game journalists not reviewing games properly, gamers refusing the buy the system because its “not next-gen” and third party publishers not allowing developers to put games on the system. WiiU, like Wii, isn’t considered “true next-generation technology”, despite the fact third parties have been bitching about wanting a WiiHD for the last four years. You got it now, what is stopping you!? 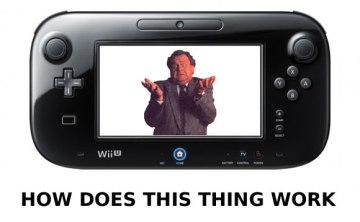 If this is what is stopping you, you need to get a fucking reality check. The touch screen can make your game better (or hell, put off-TV play on it!) if you took the time and effort. Oh, wait, it takes too much effort to port a game to WiiU because the audience hasn’t grown enough yet. Guess what? The Orbis and Durango audience doesn’t exist. Developers who have focused just on the PS3 and 360 audience have paid a hefty price and shuttered, many of these by publishers. The same ones who are refusing to put games on WiiU. THQ? They are dead.

I really don’t care if Nintendo announces a surprise price cut tomorrow for WiiU tomorrow; if they do the same thing like the 3DS, free games will make me a happy clam but I hope it doesn’t cause Iwata to resign. Hope you are happy third parties, game journalists, and gamers; Nintendo is struggling console-wise, and its your fault. Hope you enjoy your next-generation consoles that could supposedly lock out second-hand games! Want Nintendo to go third party, something you have so desperately asked for many years? Haha, be careful what you wish for.

Now if you will excuse me, I have a backlog of games to finish.

14 thoughts on “WiiU is Failing, but it isn’t Nintendo’s fault”