Saturday, November 21st. The day my heart was ripped out and thrown around a giant hall in a bloody mess. No, not from a pretty girl who broke my trust. It was because my entire life was presented to me in the purest, most innocent way I could understand; through my favourite videogame memories. Every generation of Pokemon was celebrated one after the other, with hundreds of people sharing music and memories together in a brilliant performance by the Sydney Symphony Orchestra. The last 16 years of my life were set free to swim around the concert hall, completely naked. I could see everything through the sound. My first Game Boy, my first ever Nintendo game in Pokemon Blue, the excitement for Pokemon Gold & Silver’s launch, the grinding I did in Pokemon Sapphire to train for a tournament, , my midnight download of Pokemon Y. All the different places in my life where I embarked on each Pokemon journey. Such a huge range of situations would normally create a disconnect, but I left with an enormous sense of clarity.

The S. S. Anne was preparing to take people to the concert across the huge ocean. I had my S. S. Ticket ready, but I knew if I jumped on board I’d get distracted by dozens of trainer battles. The money was tempting but I already had my Concert Ticket and didn’t care about anything else. The Symphony was to start in an hour, so I walked around and took in the scenery. Heavy cloud cover created an air of doubt, but I knew where I was going. I had Water Pokemon ready to take advantage of any rain, but it never came. Some buskers were singing and dancing, adding musical layers in tune to the Circular Quay theme.

Blaine was showing off his fire skills and dared passerby trainers to throw fire at him. There was nothing he couldn’t catch. I threw mine real high and nearly lit the tree on fire, but he jumped up in the air anime-style and caught it while screaming. You would expect nothing less from the Gym Leader of Cinnabar Island. That heavy ballast I felt on the bottom probably made it easy to catch, but Gym Leaders can use all the obnoxious items they want. Over and over. I made my way through the crowd of trainers to stop and admire the water. The NPC next to me said that Fearows were dropping rare feathers on the bridge, but I’d have to check those out another day. Strictly bicycles-only on the Harbour Bridge, and I only had my running shoes on. 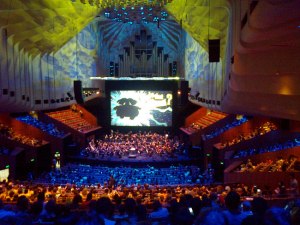 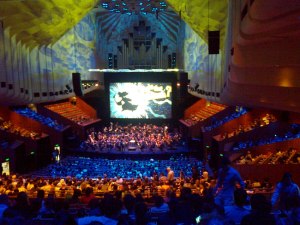 Who’s that Pokem- IT’S PIKACHU!! … PIKACHU AGAIN!! I was seated, excited, and really fucking happy with my spot. Just look at the view. When I saw the Zelda Symphony I was right at the front and it was a bit flat compared to this. Not musically, but the visual scope of the symphony. It just looks way better from the top and you can take everything in. I didn’t take any photos while the show was actually happening, because I just fucking hate when people do that. They politely asked everyone to turn their phones off, but of course there were still white screens being held up like some bizarre uncontrollable habit. No big deal, as the big screen was the center of attention. With no pictures the rest of this article is going to be fueled by imagination.

As the Symphony started the lights dimmed. The Sydney Symphony was introduced with a few words by the coordinators, and they laid out their plains to start at Gen 1, and go to Gen 6 in order with a break in the middle. The big screen showed gameplay footage all the time, and it was brilliantly juxtaposed with the music with carefully selected gameplay for the exact moments. The first song had us starting at the menu, talking to Professor Oak, and picking our starter Pokemon. Apparently they pick this at random each Symphony, and they ask the crowd what they want. I roared for Charmander, Squirtle got a little attention, but it sounded to me like everyone was hyped for Bulbasaur. Not sure what’s wrong with them. Regardless, Charmander was chosen and I pumped my fist. This Symphony was going into Hard Mode.

The gameplay screen had me engaged throughout the entire Symphony, and they had realistic backgrounds of snow, rain and beautiful mountains placed behind the gameplay footage to compliment areas in the games. It looked amazing. We were watching battles as battle music played, walking through Ecruteak City with the theme going, and reading all sorts of dialogue, from funny to tragic. I was so absorbed in the screen it didn’t feel like a Symphony at times. It felt like there were dozens of people inside the giant Game Boy under my eyes, also known as the stage. The sound was just so good and real, and hearing very simple chiptunes brought to life with so much power was startling.

I can’t recall every song but I can talk about my favourite ones of the Symphony. The first spiritual moment I had came with Pokemon Sapphire’s end credits song, one of my favourite songs from any Pokemon game. It’s just so amazing and really pushed the GBA to its limits at the time. It starts off chill and beautiful, and slowly gets more epic and triumphant. Hearing the Symphony completely let loose with it was mindblowing. My body was not fucking ready for this. The second the song started I felt a huge jolt rise through my body and up to my head, like an energy that tried to escape my skin. Just the fact they were playing this song got me so excited. My body was opening up, as if to absorb the music. I don’t remember crying but at the end my eyes were filled with water and the whole concert hall looked like the backlight bleeding from a GBA screen. One of the best songs ever and the best version I will ever hear of it.

The next outstanding piece was N’s music from Pokemon Black & White. The music was absolutely fucking amazing and captured the feeling of N’s despair while his dialogue slowly scrolled on the screen. As N laments his lack of understanding about friendship, the piano escalates away like it doesn’t care. The violins provided sympathy only to be immediately drowned out by more powerful instruments. It was the sound of an entire orchestra trying to capture the loneliness of a little boy, and still not finding purchase. N thanks you, the trainer, for showing him that there is hope. The piano rolls over in relief and the theme keeps going. Trying as hard as it can to communicate to someone who doesn’t understand the language of friendship. N’s massive speech must have lasted minutes but I honestly didn’t have a sense of time through this entire Symphony.

After this, they played Pokemon XY’s cutscene of the war, showing the old man’s story of the Pokemon he loved. Just reading the text with this incredibly epic music was profound. The unbelievable energy of the symphony emphasised the feeling of loss, anger and suffering to such an enormous degree that I wanted to reunite this man with his Pokemon myself. He suffered so much he had become blind, and started to take it out on the world. You could hear the music coming from his mouth. Instruments firing out in anger and sadness, not sure of their destination. Just knowing they have to communicate their suffering with no forgiveness.

Pokemon doesn’t have a ton of epic story moments, but the ones it does have are absolutely fucking amazing and this Symphony smashed those home. Absolutely nailed them into my heart.

The show ended on a lighter note with SINGING!! “Gotta catch ’em all” lit up the concert hall and it was amazing. The symphony just played the notes and it was up to the crowd to compliment with words. It was so much fun. You could barely make out what people were saying but we all knew what we were saying so who cares! I had no idea what the words to the 2nd verse were so I just made up my own words, it was a mess of “GONNA BE>…. VERY BEST.. SOMETHING CHAMPIYOON EVER TRYING HARD” but nobody really knew the second verse. DIDN’T FUCKING MATTER. We did our very best and sharing that with a room full of Pokemon fans was a rare event. The final song was the end credits to Pokemon XY, which also had lyrics. It was slower paced with so many words that the phrasing was hard to make out. We all guessed the phrasing and had a good time and I had the biggest smile on my face. Everyone was happy out of their skin and you could feel it.

I don’t like comparisons but people are going to ask this. Yes, it was better than the Zelda Symphony. I said Zelda was the pinnacle in that writeup, but I was wrong. It might be personal bias because Pokemon means slightly more to me, but the songs were brilliantly chosen, the moments were stronger, the gameplay footage was perfect, and the Pokemon spirit was captured at its very core. The feeling I left with is hard to describe, it wasn’t just seeing Pokemon, but seeing myself. Pokemon has this optimistic message flowing out of every game that I always cling on to, and having themes like friendship and dreams smashed into my soul made me so happy. It was quite honestly one of the best days of my life. With the Symphony still playing inside me, I withdrew my Bibarel from the Opera House PC and Rock Climbed home.