There isn’t much point doing a review for this – you either like Mario Party or you don’t. If you do, then you’re in for a real treat. I think this is the best one yet due to the quality of the mini-games, amazing graphics, and excellent presentation. Above all, I prefer the new board concept to the old one; it makes the progression of the game a lot more exciting. This makes my earlier impressions post a bit redundant, but that must be how Mario Party 8 feels right now. I’ve played a lot more since then, and unlocked everything in the game.

Roster – Mario, Luigi, Peach, Daisy, Wario, Waluigi, Yoshi, Birdo, Toad, Koopa, Shy Guy and Kamek (called Magikoopa in the US version, so I’m told). No Donkey Kong, but he has his own board instead and it’s really good.

Host – Yellow Toad! A controversial decision after the inclusion of Red Toad in the roster, but so far I haven’t noticed any bias. He talks to Toad just like the rest of us, but who knows what they’re hiding?

Party Mode – 7 boards, can be played with 2 or 3 players without COMs, so you don’t need 4 people on the board. New concept has everyone sitting in a vehicle, sharing the same space and aiming for the end of the board together. Same idea as always, get the most mini-stars to win. The old concept of individual spaces is not playable – play one of the other 8 Mario Party games to satisfy this craving.

Items – Different dice that let you roll in different ways and give you more control over where you land.

Currency – Mini-stars. No coins or stars, just one value.

Mini-Games – Free Play is available, and mini-games don’t need to be unlocked. There’s various themed challenges where you play mini-games to climb stairs, plant flowers in a garden, and roll around on a cloud. The Extras menu includes a new soccer game and puzzle game; they’re a bit more fleshed out than regular mini-games and go for longer. There’s also a Boss Rush mode and an enhanced version of Goomba Bowling. 80 mini-games altogether.

Single Player – A story about reclaiming captured mini-stars from Bowser, spanning 6 boards. A single player-only “perspective mode” that lets you play a handful of mini-games from a different camera perspective (looks cooler and makes it harder). A “time attack” mode where you plow through 10 mini-games as fast as you can for the best time, completing side-objectives in each one to earn bonuses that shave off time from your total.

Unlockables – There’s a lot. All the mini-stars you earn while playing the game can be used to buy things. There’s a new stage, harder CPU difficulty, different vehicles to use on the boards, and constellations to discover. What? You have to play the game to find out. When you’ve unlocked everything, you can still use mini-stars to shoot fireworks into the sky, a pretty cool pointless feature that rewards you playing the game forever. There’s also a sound test where you can listen to all the music from the game, and voice samples from every character. Completing the “Solo” mode unlocks two playable characters (guess which ones) and one party board.

There’s only one thing left to do…. 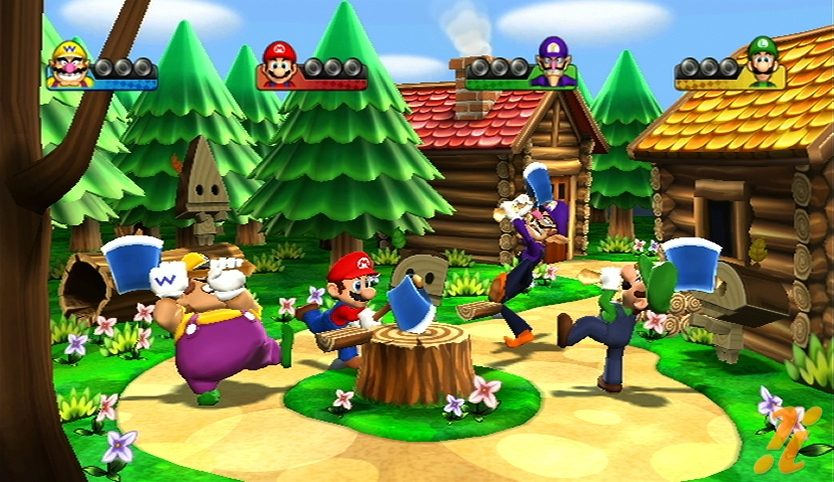