In an alternate dimension where Final Fantasy XIII was a well received videogame, Square-Enix thought it was a fantastic idea to make Final Fantasy XIII-2. Final Fantasy XIII is rubbish but I soldiered through the entire game riding the strength of the battle system. It’s quite fun when it opens up (40 hours into the game), and I’m excited about the idea of it opening up further in this sequel.

After a few hours I don’t think I can put myself through this again – the story is offensively bad. Serah has a dream about Lightning having a dream and some dude from the dream teleports into reality (which might be a dream) and they start fighting baddies on the beach in slow motion. She asks him all these questions about HOW THE FUCK HE TELEPORTED FROM ANOTHER WORLD and he just winks and says “lol! who cares! hehe yer cute, i’m a mystery man hehehe“. It feels like I just walked into a teenage girl’s fantasy.

Square-Enix are too inept to communicate anything through their nonsense cutscenes or interesting dialogue. There’s something wrong when you need 3 games to explain what the fuck exists and how it exists. The world is so broken and incoherent that Square invented this new time travel / alternate dimension rule to fill in any gaps. What, something doesn’t make sense? Sure it does! Alternate dimension! Anything could happen for any reason.

The basic movement seems a bit better than Final Fantasy XIII: you can run around areas now and talk to people. What a concept. The environments exist, but they still aren’t very welcoming. Objects and walls repel you from a distance of about 3 metres, and invisible walls will greet you if you even think about exploring. The characters’ feet also hover noticeably above the ground in places. There’s a jump button too which is fun, but every time you actually need to jump there’s an obnoxious glowing circle on each ledge saying “jump here!“. Thank god for that; the story is so deep and emotional that I forgot how to fucking jump.

From what I’ve seen, the battle system is exactly the same. Obviously it will open up and expand a lot, and this is the core of the game. I can’t comment further because it’s shrouded in too much bullshit for me to enjoy it. One of the first “boss” battles actually paused midway through for a poorly done cinematic sequence. The game makes a huge deal about pressing X two times, with a flashing “LIVE CINEMATIC” light at the top. The boss had an interesting attack and I was almost dead, but instantly staggering the enemy through a cutscene ended things pretty quick. Well done Square-Enix, you ruined the only fun battle of the game so far. 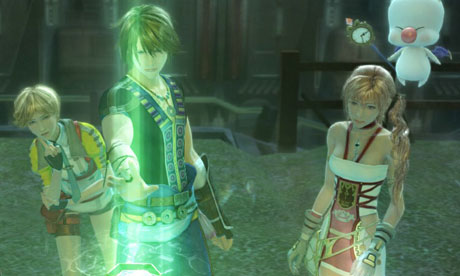 The graphics aren’t even good, what the fuck? It looks like a high end PC game from the late 90’s that doesn’t run properly – this is supposed to be Square-Enix’s strong point. Objects go through each other, textures are inconsistent, the frame rate sucks, and characters look like hideous melted dolls. Anyone who bought this over Xenoblade should be ashamed. Playing this game is a revelation: Final Fantasy is dead.