I recently got a PlayStation Move, and I’m excited because I can finally enjoy hardcore games like House of the Dead, Dead Space: Extraction and Resident Evil: Chronicles. Oh wait, I’ve played all of those. Nevertheless, I picked up a copy of House of the Dead: OVERKILL Extended Edition, because the game is amazing and I had to play the extra levels. Also because it was $10 at Big W. 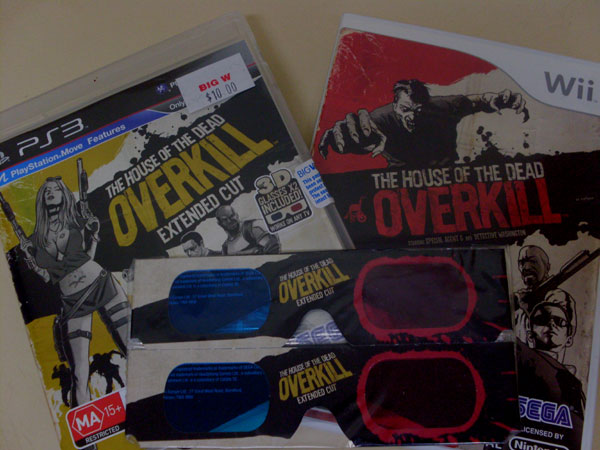 That’s right, I left the stickers on. The one on the side is even ripped. Don’t have a panic attack nerds, this game isn’t going on eBay in 20 years. I work for a living. The 3D glasses look cool, but I can’t say more than that because I don’t have a 3D TV. If I want 3D in my living room, I’ll look out the window. Into my neighbours house. At their 3D TV.

This game was my first time using a Move controller, so I took my time calibrating it. This thing was a nightmare right from the start. Firstly because of the internal battery, you’ve got to use it with a chunky cord attached for the first hour or so while it charges. This is contrary to the warning from Sony, “do not play Move with the cord attached,” but I felt I was clever enough to risk it. If a cord gets tangled, I will deal with the consequences.

The instructions are fairly simple. First, I calibrated it in the PlayStation Menu under accessories, then I dove into the game for another calibration session. It asks you to shoot each corner of the screen and it guesses the middle based on that. After a few tries I got it in the center, but then I discovered that the center moves based on your distance. If you pull the controller back (while keeping the aim straight), the cursor will slide to the right. Fuck me, this is magic.

Sure enough, when I re-calibrated it at different distances the center would always move when I sat forward or backwards. More like PlayStation Don’t Move, am I right? I could just sit still, but I’m about to play House of the Dead: OVERKILL, and I’m pretty sure it’s going to be exciting. I couldn’t find a compromise, so I just calibrated to the average distance I’d be. Maybe it’ll all make sense in the game? 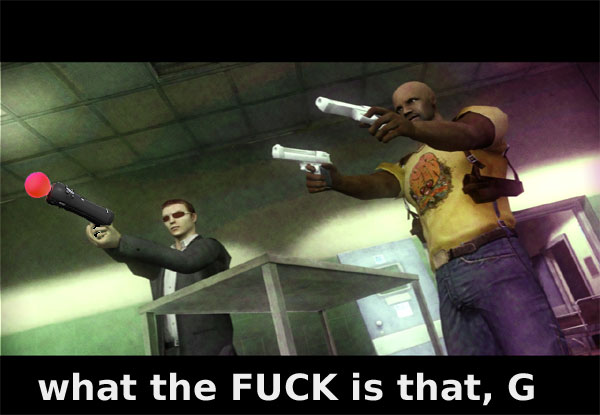 The game is still amazing, and the two new levels are pretty damn awesome. Easily as good as the rest, and a new character has been added. The graphics are basically the same as the Wii version, with a higher resolution and blockier objects. The classy grainy style remains intact, and there’s some subtle lighting effects that make a lot of areas look better. Some of the old levels are also slightly different, and there’s a lot more unlockables to shoot. I haven’t encountered any glitches so far either; there’s quite a few moments in the Wii version where mutants decide to pop in and out of existence.

Now back to the controls. The first stage (mini-game) was going pretty well, the cursor was centered just as I had calibrated it. 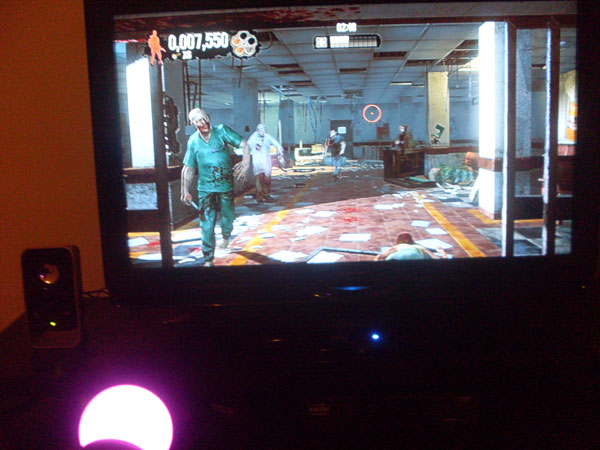 Wait, what? The cursor was slowly creeping to the right, and I couldn’t figure out why. 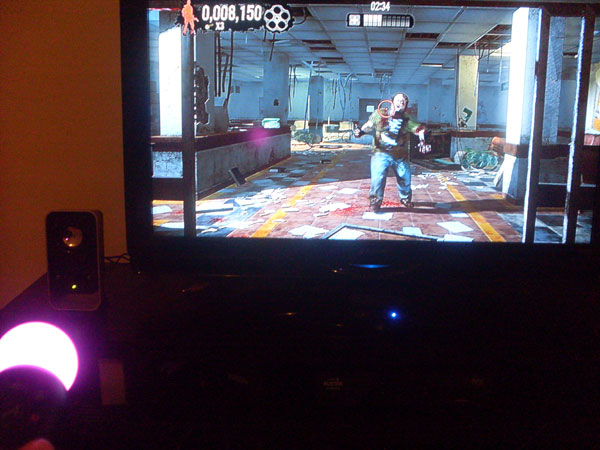 OK, shit. After reloading the gun a few more times I found the problem. Shaking the controller to reload completely fucks up its orientation. I have no idea how this happens, considering the PlayStation Eye should still have the same reference. Nevertheless, I tried it over and over and confirmed it: shaking the controller to reload causes the cursor to drift. Always.

Thankfully there’s an option to center the cursor in-game, just point at the middle and hold SELECT. This works, but is stupidly awkward because the SELECT button is dug deep into the side of the controller, so you pretty much need two hands to keep it steady and slide your fingernail in while mutants throw their guts at you. I’m guessing this button placement is so we don’t “accidentally” press it. Thanks for thinking about the gameplay experience, Sony. I got used to constantly recalibrating and the game is certainly playable this way, but after a few levels I decided to stop sabotaging myself, and pressed A to reload instead. How flaccid.

After a good few hours beating every level, the game is certainly playable and enjoyable with the Move. Using A to reload, I hardly need to calibrate it at all, maybe once an hour. Unfortunately, it’s just nowhere near as fun as the Wii version. It feels precise, but the cursor moves a lot slower and rather than flicking around, it seems to “drag” around the screen.  The lack of confidence in the cursor makes it impossible to string together headshots, and I find myself simply aiming for the body because going for a headshot mostly misses and breaks the combo. Not the best way to play the game.

I ended up putting it away and playing the Wii version. It’s more fun, even if the Extended Edition has extra content. PlayStation Move might do a lot of things, but it’s not a very good pointer / shooter. The extra scenarios are pretty cool, but I can’t replay them with this glowing pink monstrosity. I recommend looking them up on YouTube instead. Here, I’ll save you the trouble. There’s also a cameo from our favourite plumber – is Nintendo going third party?

Move is baffling. I’m going to try it with a few more games to see if it acts any differently. The only use I can see for it is in a slow adventure / horror game. Even then, the bright fucking ball would destroy the atmosphere. The huge light on the top might look cool to Sony, but it’s damn annoying. It’s so bright and big that you can see the reflection of the damn thing in the TV while you’re playing. Combine that with the piercing blue light on the PlayStation Eye and it’s a fucking light show when you play in the dark. The PlayStation Eye is apparently too stupid to recognize anything other than a sparkling fucking disco ball. It’s amazing how I’ve got two things dangling from the USB ports and it still can’t do the job of a basic Wii controller and a candle.

4 thoughts on “House of the Dead: OVERKILL – Motherfucking MOVE Edition”