What a great day. There’s nothing like being out in nature, completely free. You don’t have anywhere to be, and you’re riding your bike happily along. You start riding a bit faster, not because you need to be anywhere, but because the mountain is daring you. You scoot around the corner to get a better view, then get faster and faster downhill. WOOOOO!! YEAH! Suddenly it’s getting twisty… better slow down. Nah, you can handle this! 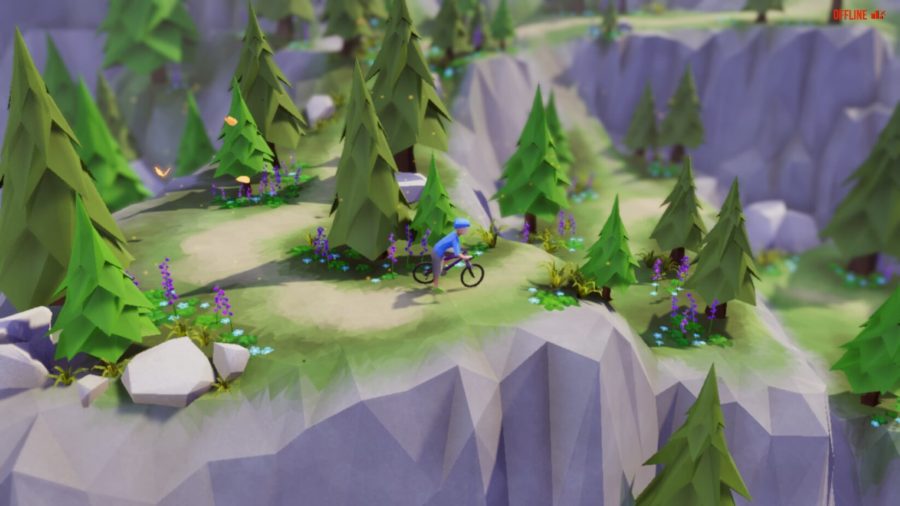 *thump* right into a tree. Oof that hurt, but you’re back on your bike immediately to try again. Must have blacked out, it’s like no time passed at all. No bruises either!

Lonely Mountains: Downhill has such an accurate game title that I barely need to do this review. Yet, I’m still compelled by how it makes me feel. There are mountains, and you ride a bike down them by yourself. That’s pretty much it, but it’s wonderful. There’s no music, just the sounds of nature and the bike treading the dirt. The graphics are solid and comforting at a smooth framerate. The controls are perhaps the greatest accomplishment of this game, it feels like you’re riding a videogame bike except it’s not awful. Tilting the stick, braking and pedaling are all extremely easy inputs, but also important. This bike decides if you will stay on the mountain or fall off.

There are 4 large mountains with 4 trails in each, and to unlock them all you need to do is play the game. This is not a super hardcore game like Trials or Trackmania, at least not on the surface. There is a huge amount of depth to the design of the mountains, but you have to do a simple tour of each trail before unlocking the challenges. Then you have to do it “without crashing 20 times” which is extremely generous, but harder than you might think if you get too cocky. It’s a good thing that nature teaches us to be humble. After becoming one with your path, you can then try to beat time targets for medals and unlockable bikes. By the time you get there, you have a good idea of how to do it. Shortcuts open up, you learn where you can fall, where you can’t. The mountain is harsh, but inviting. 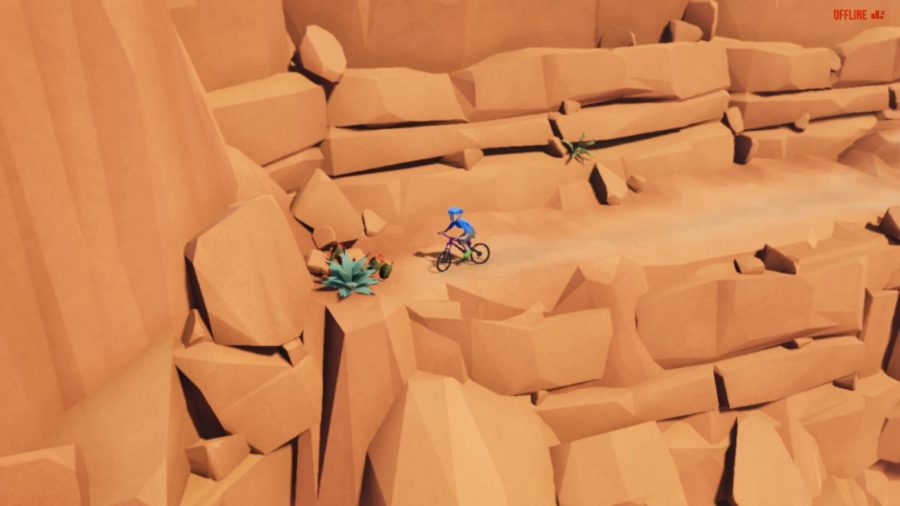 Oh no… what have I got myself into? This looked like the only way down. Now I’ve gotta gently ride down this rock at the right angle… *gulp* here goes… weeeeeeeee! Alright that wasn’t so bad. Now it’s getting steeper, and longer. This is getting scary, but I’ve come this far. Just gotta make it to the next checkpoint and then I can crash again. This is actually quite a fun puzzle to figure out. Suddenly I’m thinking about what bike I want to get with upgrades. Extra suspension would definitely help me survive these falls. That’s probably what a pro bicycle rider would pick, the one that will kill them less.

Even when the difficulty gets high it stays chill with its wonderful aesthetic. You crash with a hilarious “plunk” that is not accompanied by any additional sound effect, music or dramatic popup. You know what you did. The trees look at you, the birds laugh at you, and the wind tries to pick you up. With a simple button press you are back to the last checkpoint, loving life again. Nobody is disappointed in you. Nobody even knows you are here, or cares. It’s lonely, but liberating. I’m going to be my best self, but not because I need to. Because I get to do more fun stuff this way. 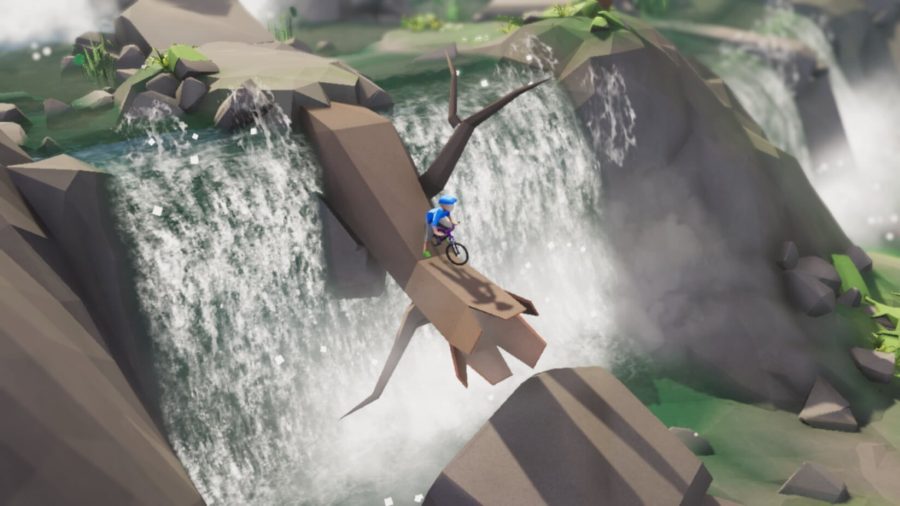 The camera in this game is fixed but usually provides all you need. You can see the landing here, but not what’s after it. Throughout the game you’ll be driving into the camera, away from it, left and right, but the controls remain consistent. It will zoom in and out by itself when appropriate. You can opt for directional screen-based movement, or more realistic “tank” controls where you just press left and right to move the handle bars, which I opted for. Sometimes there will be a jump that you have to fail a few times, but these are the exciting parts of life really. You know something cool is ahead but not exactly what it looks like until you get there.

Lonely Mountains: Downhill is available on Switch, PC, PS4 and Xbox Game Pass, and worth a look even if you never usually think about bicycles. I haven’t really enjoyed using one in a game since GTA: San Andreas. I got completely hooked on this just because of how calming and well-designed the mountains are. You get to enjoy waterfalls, rivers, rocks, bridges, fog, and every trail feels unique. The environment is pretty much the game itself, when you realise you can go anywhere. It’s like if shield-surfing in Breath of the Wild became it’s own game with challenges. Open air time trials. Boom, now I have a title for this writeup and a new outlook on life’s challenges. We have all the time in the world to do anything we want, as long as we just forget everything else. This game allows for that feeling to exist without saying a word.