It was a rainy day at Jerez, Spain. As a rookie I had thrown myself into the deep end of online racing, joining any lobby I could find. I’d already been involved in some big battles but this was the smallest grid yet, just the three of us. No matter what happened, I would be on the podium at least. That wasn’t the goal however, as I only had the top step on my mind. I had come 2nd a few times now and was hungry for that first win. Little did I know, this would not be an ordinary race.

And the lights go out!! Off we went, everyone getting a decent start with a timely clutch release. I prepared for the braking point of the first corner, making sure I had enough space. I was going to focus on my exit speed and make sure that no matter what happened, I stuck with them and at least had a slipstream. I had no idea how spectacularly this plan was going to fail.

To my shock, I was the only one who braked for the corner. I looked over confused and those two had driven straight through it, excuse me? Does this mean I win if they crashed off? Looking at the dash, I noticed they had no penalty and they kept going. They were both ahead of me.

It didn’t take me too long to figure out they had switched off the rules. There was no penalty for corner cutting whatsoever, thus the track layout completely changed. What used to be a corner, was now merely a suggestion. 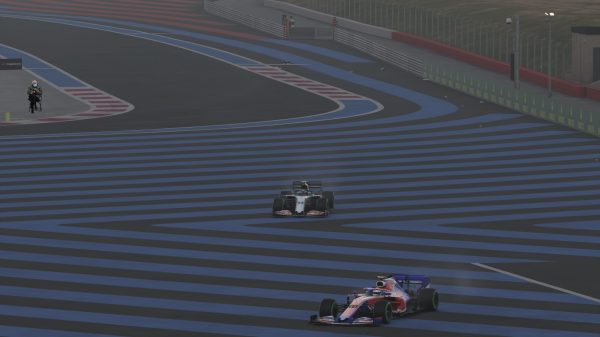 Oi you, come back here mate! I barely knew this track in normal conditions, and now I had to learn it all over again. It felt like Forza Horizon off-road, except this track had lots of legitimate surface for racing. I tried to picture a new layout over the mini-map but it was difficult and inaccurate, as the mini-map doesn’t account for the actual physical limits. I made quite a few mistakes figuring out what my racing line would be, but kept my focus on my opponents and kept them close.

I got better each lap but I still wasn’t perfectly nailing any of these imaginary corners. Every fibre in my body was telling me to take the corner properly, and I had to fight these existing brain neurons to make a new path. Some entire corners could be skipped just by going straight, and sometimes you had to get creative and create a new line. I was doing quick and dirty math in my head to figure out which line would give me better exit speed. Some sectors I would lose a bit of time, then suddenly I would gain a massive 10 seconds.

My rivals must have got a bit too creative, as eventually both of them crashed and I could sense an attainable victory just by staying alive. Even with a comfortable lead I still felt nervous driving into the unknown, as if my car was about to grow wings and fly up to rainbow road.

I cut through the final corner to get the highest possible speed on the main straight, the irony of the Road Safety sign not lost on me. This would be an extremely stressful race for the trackside marshals, I’d imagine. They all stood there calmly with remarkable composure, as we drove full speed right next to the barriers. Don’t worry guys, we know what we’re doing! We’re in that elite class of athletes known as gamers. No matter what goes wrong we’ll arrive in one piece, just don’t try this at your local racetrack.

The race was over and what started as somebody’s attempt to cheat by changing the rules, turned into a fun adaptable challenge that I ended up winning. It was extra amusing because this was my first win online and the achievement popped up, after about 20 failed attempts in normal conditions. This is not a very organic or fulfilling style of driving, but it made me realise it can be fun to break the norm every now and then.

Why not create our own racetrack if we have the option? Why not use every rule option in the game? Even in real racing, one of the most important skills is adapting. You have to drive differently if it starts raining, if your car has a technical failure, loses a gear or a wing. Unexpected changes or challenges appear all the time in life, may as well learn to deal with it and enjoy the ride. Thank you FastBro69 for showing me the light in this unconventional lobby.