*tch* This is Leon. I’ve arrived on the Wii U through the Virtual Console, some kind of digital download service. They took a sample of my blood and uploaded it. I’ve also been injected with a virus, it seems to have changed my reflexes. I can see a green cursor wherever I aim my gun. It seems to be beneficial so far, but I’ll keep you posted on any adverse affects. Leon out. *tch*

Forget HD graphics. A new control scheme is our best chance to stop the Las Plagas virus from spreading. The Wii Remote attachment issued by the US government allows faster, more precise aiming without taking up a briefcase slot.

I was a bit skeptical at first, as the Wii pointer works a bit different in this game compared to Metroid Prime or Conduit. Resident Evil 4: Wii Edition removes the iconic red laser sight from Resident Evil 4 and replaces it with a big ugly green cursor. I was shocked to discover that the cursor does not move the camera, so you still have to guide it around with the joystick. It looks so uncanny when Leon’s gun stays in place while the cursor darts around on its own. Surely this was not made by the US government. It must be a ploy from Saddler to confuse Leon and ruin the atmosphere to make him turn back and go home.

I shamefully could not adapt, and played half the game with the Wii Classic Controller. It was the shooting gallery that changed my mind, however. I ripped off the Classic Controller cord and it felt like I had freed myself. The shooting gallery became a complete joke. I got a perfect score on every single round, first try. It made me realise my combat abilities could be so much better, so I kept the nunchuck plugged into the Wii remote as I excitedly went back on my adventure. The merchant didn’t mind. Now that I was used to the way Resident Evil 4 used the analog stick, it didn’t feel weird anymore. There were two steps to getting used to the controls for me, firstly getting back in tune with Resident Evil’s core tank movement, then guiding the cursor within the space I had created. I knew how to guide the stick, and now I had an extra layer of precision on top of it.

The fact that this game keeps the core Resident Evil 4 movement while adding this enhanced combat option is beautiful. I started getting headshots with ease, manipulating enemies by shooting key spots, and even hitting the knees of enemies as they stuck out from their shields. It opens up a whole new layer of creativity in combat. The difference was further emphasised to me when I took out the rifle and had to use the stick again. I was flooded with disappointment as I stiffly stuttered the cursor over the enemies. No thanks, rifle. My pistol is more accurate now, even without a scope. Have a look at fellow Pietriot Pro Daisy’s video for a skillful demonstration.

What a videogame. The gameplay is just so damn satisfying.

What amazed me on my recent playthrough of Resident Evil 4 is just how big and varied the game is. The game never stops delivering new gameplay ideas, and is relentlessly rich in design. Every area is a new combat puzzle waiting to be solved from multiple angles. There are so many different ways to approach groups of enemies in this game and it’s a lot of fun to experiment. This might make it sound like an action game, but I really disagree with that genre label. It stays pure survival horror because everything you do is risky. You can do SO MUCH, and it can go wrong in just as many ways. Stunning an enemy to run up and kick them could easily get you grabbed. Knifing an enemy on the ground to conserve ammo could allow someone to sneak up behind you. Throwing a grenade close range is going to damage you. If you’re reloading the shotgun, you better have 2 seconds worth of space in all directions. Even opening the menu to change guns feels like you are fumbling around in your pockets. 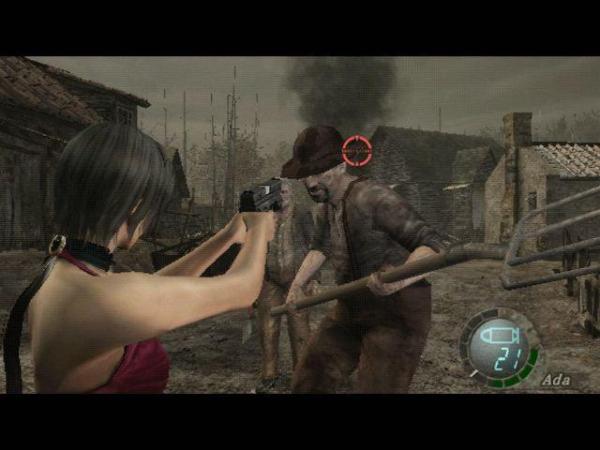 After beating the lengthy campaign I still couldn’t stop playing. Downloading this game onto my Wii U had awakened the Resident Evil fan within me. Separate Ways is one of the extra modes they added after the GameCube version, and it ended up being way cooler than I expected. A little game in itself, you control Ada and progress through 5 chapters getting yellow herb upgrades and new weapons like it’s her own campaign. I’ve done a dozen playthroughs of Resident Evil 4 on GameCube, thinking I had seen everything, but it was a pleasant surprise to see new environments in Separate Ways. I loved the final chapter, and thought it added a lot to the main story without changing anything or being too clever. Just a really fun, interesting campaign that expands the scope of Resident Evil 4 without changing it.

Mercenaries Mode is another additional mode that’s a lot of fun, but very difficult and intense. It might be the closest thing I have played to an anxiety simulator. Not only do you have to hit your shots consistently, but you have to purposefully put yourself in dangerous positions to keep a combo of enemy kills going for the entire 3-5 minutes. Your nerves will be tested as enemies spawn in all directions. You can’t see the chainsaw enemy, but you can hear it. If you play this enough you’ll get significantly better at the main game too. It’s the Blast Ball of Resident Evil, except you can’t put your head back on when it gets chopped off. Zero points, try again.

Perhaps the one stain on this game is the massive QTE fad it started. A Quick-Time Event is what we’ve come to call it, buttons that appear during cinematics just to make sure you’re paying attention.

It swept the gaming industry and gave other developers a reason to dumb down their gameplay. To be fair, they aren’t overdone in this game and do add a tangible amount of tension. Shaking the Wiimote to escape a boulder just feels like you’re sprinting for your life, and it’s a more enjoyable input than mashing A and gritting your teeth. Besides that, there are moments where you have to avoid things. I found pressing A+B on the Wiimote to be like a “grabbing” reaction so it was a bit more authentic in this version. The game fully maximises the artificial tension of QTEs in the knife fight pictured above, to good effect. Even this questionable aspect of Resident Evil 4 is fully fleshed out from a design perspective, and that sums up the game really. Wholesome, deep, rewarding, engaging, complete.

I’ll finish by talking about the atmosphere of this game. It is so heavy and consuming. The whole Resident Evil series has a soothing aura that comforts you whenever the action stops. Resident Evil 4 delivers this feeling in a quiet but powerful way. Leon loses his ride after a bridge collapses, and now he’s stuck in this village with hostile locals. This strange village becomes your entire world, as you try to creep around and find the best way to proceed without dying. The grey clouds in the sky never lift, making sure you don’t think about the outside world. It’s one of those games I can play just for the atmosphere. Simply existing in this game world is enough to completely engage my mind. Leon is also the perfect character for the setting, because he’s just cool and quiet. The outstanding videogame setting does most of the talking. I will slowly look at every structure and explore every corner, no matter how many times I’ve beaten the game. It’s infinitely interesting.

You can look into the background or even just stand there listening to the game. Reloading your shotgun with some hard fast clicks becomes part of the environment’s haunting bustle. You can feel the wind and smell the dead bodies. The Wiimote even adds to this, with gunshots and reloads crackling from the tinny Wiimote speaker. It’s a real shame they didn’t make a Wii U version, as the GamePad would have been a perfect item briefcase, allowed gyro aiming, enabled the speaker with video communication on the bottom screen, and also a Miiverse feature so I could get proper screenshots for a more in-depth writeup. Capcom just don’t care anymore, but luckily Resident Evil 4 still holds up to this day with its flawless game design. It hasn’t been topped a decade later, and I don’t think it ever will be. Simply a classic.

<Hunnigan> Leon, are you okay?

<Leon> Yeah I uh, forgot something.

<Hunnigan> Why are you going back? Wait, is that the sample? NO, not in the river! LEON! DON’T YOU DARE!

5 thoughts on “Resident Evil 4 – Wii on Wii U Edition”