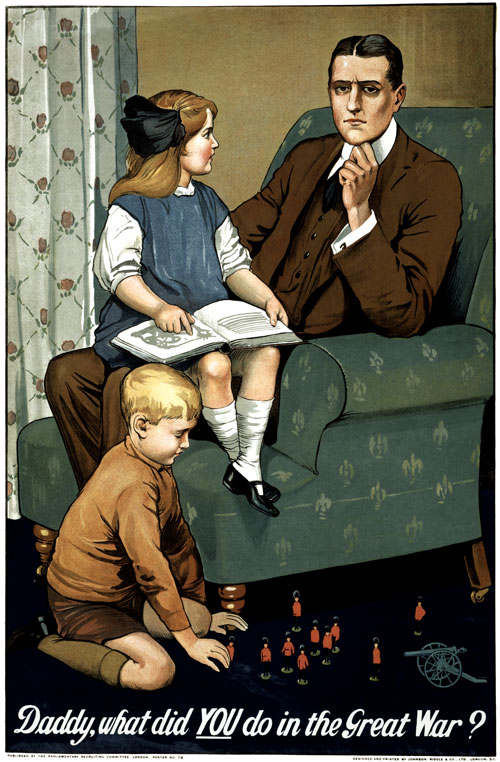 Hours ago, war broke out across the North American continent – no platform was spared as Electronic Arts invaded, attempting to seize all Activision strongholds on the continent. As we speak, more EA forces are mobilising off the east coast of Australia and there are reports of the EA navy circling Europe from the North Sea to the Black Sea, preparing for an invasion before the week is out. This is of course the Great Gaming War of 2011 and just as the poster above depicts, your kids will ask you about what role you played in this pivotal moment in history.

Or so EA and Activision would have you believe. I’ve been devouring gaming media since I first bought a copy of N64 Gamer 13 years ago and I have never seen two games goto war like this. I’ve seen rival Christmas line-ups, I’ve seen similarly themed games, but what is unfolding now is the equivalent of a console launch. The marketing tagline for Modern Warfare 3 has suggested that their game depicts WW3 but you’d be forgiven for thinking they were referring to their own skirmish with Battlefield. Ever since Battlefield was announced, EA execs have been shit talking Activision and Call of Duty. And while our friend Bobby has been kept muzzled, lest he say anything detrimental to the company image, the return fire has been just as fierce. Here’s a little example.

Of course, from the developers themselves. The little guys who actually make the game, they can’t help but lavish praise on their competitors. DICE have cited Modern Warfare as a big inspiration to them and an unnamed Infinity Ward employee confessed to having enjoyed his holiday to Sweden. But have the fanboys seen that? Of course not. Enter any message board right now and the foot soldiers of this war are screaming at each other. Of course there was Clipgate earlier in the year and now they’re all arguing about whether or not it’s worth making a whole new game engine, complete with new bugs, versus continuing to rely on a highly modded, polished id Tech 3. Obviously everyone is an armchair graphics programmer these days, so much so that no one should have any trouble telling me what game this cropped screenshot is from.

By all accounts, this Battlefield 3 launch is an ongoing disaster. Right now all the top news agencies have their top war correspondents reporting what a joke it is. We’ll start with the lack of a simultaneous worldwide launch. It’s like EA don’t realise we’re living in the digital age now. The 2 day delay for Australia and 3 for Europe are without purpose or benefit. EA has a list of digital distributers on their website, that list is ordered by country. Not even currency. So let’s say you’re Australian and wanted to buy it. For a start, there is no Australian distributer, so you might goto say the American one, and the prices are all over the fucking charts. $80 on Origin, $60 on Direct2Drive, $60 on Gamersgate but WAIT, if you’re Australian and goto Gamersgate you suddenly find yourself on the British version of the page, paying £35. Of course paying pounds sterling has its advantages, for a start the game has come out in America already but not in Britain, so you can still ‘pre-order’ Battlefield 3 and get the pre-order discount (10%) as well as the bonus DLC, that you have to buy separately from this point on if you’re American.

Oh right, day 1 DLC that is only free if you pre-order. The DLC itself isn’t even new content, they’re OLD Battlefield 2 maps reworked for the Frostbite 2 engine. Not included in the DLC is the now traditional day 1 patch for the game. When quizzed as to what the patch contained, a lead game designer stated it contained “all the final stuff” so if you’re still living in the material age like it’s 1987 and bought the physical copy, you didn’t even buy the whole package. One must further wonder why they’re releasing at this time anyway. If they couldn’t get the game in a final state by the time the discs were printed, couldn’t they just have spent another 2 weeks holding the game back? Because that’s the final mystery surrounding the launch date. They’re not even going up head to head with Modern Warfare 3, which releases on the 8th of November. I’m sure they will do something on the 8th though, it’ll probably be Wake Island DLC but I like to think EA will pay people to go into game retailers around the world and pick fights. In fact, I’d encourage everyone do to this. Just pick a copy of Battlefield 3 off the shelf and queue up behind people with their Modern Warfare preorder dockets. Maybe you could trade MW2 in and make a big fuss about it.

There’s also been lot of whining about Origin and failing to install properly or whatever, but those crybabies are tossers who should’ve installed Origin months ago like I told them to.

I mentioned before how, despite the hilarious hype war unfolding, the developers have taken inspiration off each other. That’s probably how we’ve ended up with two games with theatres of war in the Middle East, Eastern Europe and Paris. I kid though as the games do seem to have different pacing and marketing angles, as is plain to see in any viewing of the launch trailers. What hasn’t changed though is war’s effect as a drug for the masses. Nothing placates a population like a good war and an enemy to hate. As cynical as I’ve been in this article, written in a text box through a browser, another text box in another tab contains my credit card details as I pre-order a European copy of Battlefield 3, just to secure that Back to Karkland DLC. I’ll be hanging out on anonymous boards hanging shit on Modern Warfare kids in the next few months too.

The good news is that Obama is recalling the troops from Iraq, and I’m sure they’re looking forward to some virtual war to play as soon as they get home for the holidays.

7 thoughts on “The Hype War”