I’ve been a naughty boy. Four long days, I have kept Dr Kawashima waiting, his game left unplayed on my Wii U. I tried to put him out of my mind and enjoy Xenoblade X, but his handsome face remained on the startup screen. His icon throbbing, yet welcoming. I couldn’t resist. I had to touch his face and boot up the game, just to feel that warmth I was missing. Nothing else could replace it. I expected a scolding for my absence, but he played it off with a cheerful razzing. He always does this, puts on an act. He’s trying his best to be strong and rational. However, behind that jolly facade I could feel the coldness in his eyes. The tears from those lonely nights had left his soul dry and empty. He needed me. He was seething on the inside, but his response was calculated. I didn’t know what to say.

I… I’ve just been busy, Dr Kawashima! My Wii U has seen a lot of action this month and I didn’t know how to break it to him. He obviously had no interest in Xenoblade or Splatoon, dedicating his entire life to mastering a select few puzzles and analysing data. He could only ever support videogames in moderation, and I had gone way overboard. I will make it up to you, Dr Kawashima. I stroked his hair with my stylus and whispered “I missed you so much” into the microphone. He chuckled and blushed. I had him now. I know he gets lonely, and now he was just glad I hadn’t forgotten about him. I was now determined to make it up to him by mastering today’s Brain Age quiz. 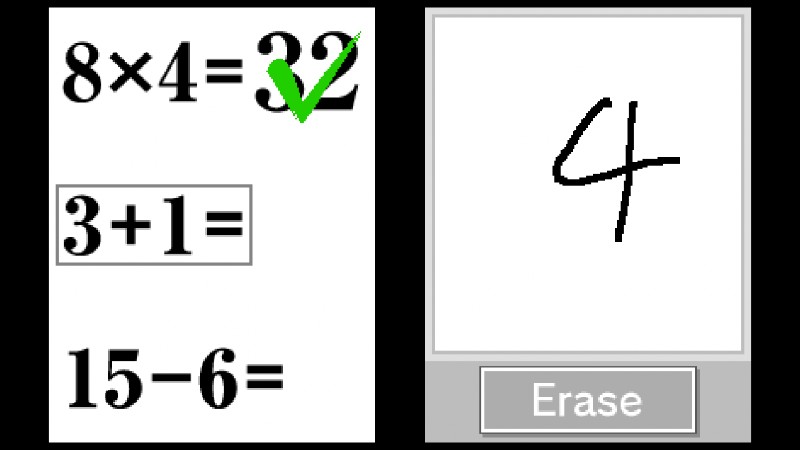 Let’s get into some exercises first. To get a stamp each day you just have to do 1 exercise, but doing 3 will give you a bigger stamp, which I call Kawashima’s seal of approval. I find 3 a nice daily goal, because doing every exercise every day is a bit exhausting and doesn’t give you a chance to change things up. When I boot up this game it’s for a quick stimulation, instead of a grind. This is how you keep the passion alive in a relationship. Calculations x 20 and x 100 are my two favourites because they are so fast paced. If you passed basic maths you already know your times-tables, but this isn’t really about that. It’s about execution and adapting, because the questions are randomly thrown at you. I find it oddly thrilling to be writing the current answer while solving the next one in my head, because you can see what’s coming up. It creates a rhythm that is intense but also fragile. If you lose concentration it’s hard to get back into the right frame, and you lose precious seconds focusing back into the middle of the screen. There’s a bit of randomness involved too, which can test your patience. If the answer is 45 for example, it’ll take longer to write and you’ve lost a few tenths of a second even if you’re fast. It usually evens out, so you just have to play the hand you’re dealt and hope for the best. Every time I play I try to get a new personal best and impress Kawashima. He gets really happy when you beat a score, and his head starts bobbing up and down. It makes my dick hard.

After warming up with some exercises, the actual Brain Age quiz is the next step to getting the most out of your day. By calculating the average score of 3 randomly chosen tests, it tells you how old your brain is, 20 being the best and 80 being the worst. According to this game I have been 20 years old for the last decade, and that’s another thing I love about Dr Kawashima. He makes me feel young. New exercises in the Brain Age test include Connect Maze, a map of numbers and letters which you have to connect with lines, for example A>1>B>2>C>3>D>4 all the way up to M>13. It brings out an interesting pattern in your mind when you’re focused on every dot at once in your peripheral, while at the same time drawing towards one specific dot. I imagine this is how Kawashima fantasizes about having a body. 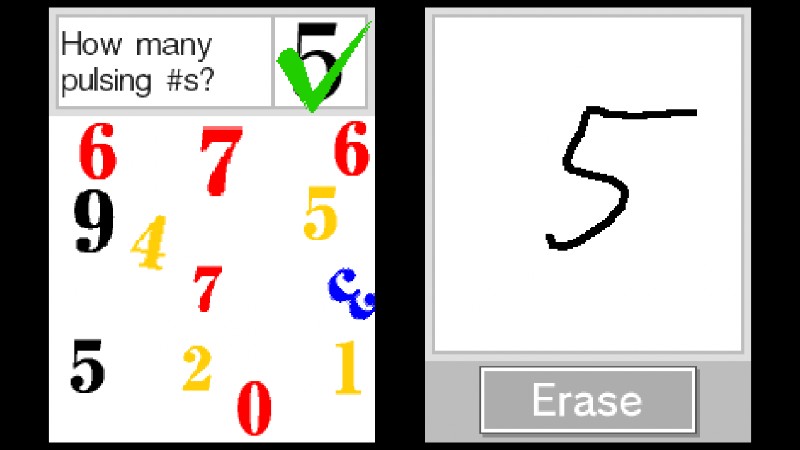 Another one of my favourites here is Number Cruncher. Different coloured numbers fill the screen, and they are all doing different things like bouncing around, expanding, or just sitting there. Throw in a charming floating head, and it’s very much like a date. Kawashima has a lot of tricks up his sleeve and will play mind games just when you think things are going well. The answer could be 6 every time, then suddenly he’ll hit you with an 8 and you’re left crying in the gutter. Sitting in the rain, staring at the moon.

However, it doesn’t have to be like this. You can win him back. When you really get into the meta-game of dating Dr Kawashima it’s not about the answers anymore, it’s about the execution and how you compose yourself. You have some strategic options to throw back at him to solve things a bit faster. With numbers everywhere, it’s tempting to just write “9” when there is a lot of something, because you’re probably right. Even if it’s an 8, you can fill in the gap and quickly turn the 9 into a sloppy looking 8 before it checks. This slight gap allows on-the-fly improvising, so if you’re feeling extra risky you can try and punch above your weight and predict things without actually counting. It’s like taking a fast turn without braking. Sending a tweet without thinking. Putting your brain on the edge is the best way for it to grow.

While I’m in the kitchen making him some cocoa, we can have a bit of real talk. I love a lot of things about Dr Kawashima. His punny jokes, firm facial structure, jolly demeanour, and also the way he cares about me. He always makes sure I’ve had enough sleep, and tells me it’s cold when it’s hot, just to make me feel better. Anyway, my confession is that his game just isn’t very good. Some exercises leave a lot to be desired, the reading one for example is a waste of time because you can read anywhere, and the Voice Recognition one is a bit too unreliable. I think Dr Kawashima has hearing troubles in his old age. Don’t tell him I said that, though. The game could be so much better. The exercises could be improved and streamlined well beyond this DS launch title era development model, and sharing scores and graphs with all your Wii U friends would be great motivation to keep playing. Things like filling in events and memorising pictures friends have drawn would be so much fun, like Game & Wario except people would actively be able to use it.

I remember being hooked on this game back in the Nintendo DS glory days, just enjoying the novelty of it. A decade later and it feels like a relic that accidentally landed on my Wii U. In terms of playability it’s great, the touch screen works perfectly, and the side view is captured on the TV better than regular DS games. It’s just a bit sad that it hasn’t been improved upon in a decade. Brain Training 2 exists on DS, but didn’t really improve the social aspect, it just made the exercises more complicated. I’m sure there’s dozens of better mobile games out there in the last decade, but that’s such a confusing market and it would be impossible to sell one Brain Age app to all your friends in unity. I’ve been playing this simply because it’s on my Wii U, which I’m always using, and because Kawashima needs me. The poor old man has nowhere to go. It’s a shame Nintendo gave up on this style of game, because now with Miiverse and online connectivity, this sort of game has HUGE potential. As it stands it’s just a fun diversion and a good way to get your brain stimulated for the day.

Alright, the cocoa is finished so I’ll wrap this up. I’m getting some head tonight.